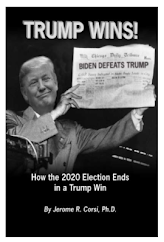 Media reports as if the majority of Americans are aching for civil war, which they are not. Venezuelan, Dominion and Smartmatic voting machines, have been around and known to be rigged for more than a decade already. VP Pence was tasked with election fraud investigation during his firs week in office. Why then wait until the eleventh hour to bring accusations? The people are being played, to demand a police state. Ain't gonn'a happen. Folks just stay in and defend their homes.

2. Fox News and Newsmax have already retracted allegations they made on-air about Smartmatic machines.

3. Your information, as usual, is hopelessly wrong.

Well, they are. That's exactly my point. Your information is WRONG.

Are you so sure!?

Eric Coomer is not the company, his suit is personal.

So, where did you get your "facts" from?

Or, would you care to retract?

I couldn't spot this "fact":

The closest I can find is:

which is NOT the same as your 'sued'.

That's the beauty of Fake News. It takes far less effort, and the results are much more FUN! Thea deserves an apology!

So, did Fox News and Newsmax retract the statement or not? I keep finding conflicting information. If they haven't I'm sure that the companies will follow up their legal demands with a lawsuit.

According to USA today, Dominion did file against Sydney Powell "Dominion seeks compensatory damages of $651,735,000, punitive damages of $651,735,000 and reimbursement for its legal costs...The company sent Powell a retraction demand in December, prompting her to tweet she was "retracting nothing." Dominion sent similar demands to numerous people and news media companies, including Trump's personal attorney Rudy Giuliani, White House Counsel Pat Cipollone, Fox News and attorney L. Lin Wood – who told the Washington Post he was representing Powell in the defamation case. "

So perhaps more lawsuits will be pending.

This is playing out in real time, so facts today will be fake news tomorrow. Let the legal system (and time) handle this. When I read the suggested articles and many more, I also got the impression that Fox News and Newsmax were going to be sued (legal action)if they didn't retract.

Side not...the letter to Sydnee Powell was sent a week before the other 21 legal demands.

Thanks for the further research, but all this info about lawsuits does not, IMO, get to the heart of the question.

Dominion itself points out that "A hand recount of all paper ballots in the State of Georgia completed on November 19 verified that machine vote totals were reliable and accurate."

In short, I see this allegation as just one of a whole suite of lies dreamed up by an ego-bruised maniac. I have no respect for the gullible people who choose to believe him despite the technical facts.

I want to (and do) believe that the machines worked as advertised. I was an communications/electronics tech in my past life. Also, after retiring, I was a slot machine tech for a short while. I can say with 100% certainty, that changing the protocols and programming of a machine is NOT easy to do. You need training, access and time. It's not as simple as putting in a thumb drive and clicking download.

Now, to me, the way the numbers were released was bit weird, and that is fueled a lot of the animosity (IMHO). Large dumps of votes for one candidate and vise versa. I still don't believe anything illegal happened. This is being litigated, investigated and recounts have been done (and redone). So far, nothing untoward has been shown. Just like the 2000 and 2016 elections.

To assume and pontificate otherwise is irresponsible, and as we plainly see, the crazies on both sides are just looking for an excuse to riotest (protest/riot depending on who you are listening to at the time :P). There is no conspiracy in plain site, or behind the scenes. No false flags and no NWO.

This just in: Dominion has now sued Sidney Powell for $1.3 billion, claiming that her "viral disinformation campaign" has destroyed the value of the business.

Now I'm confused again. I thought that the purpose of a law suit was to prove a pointy. I had no idea that all you had to do was file suit and be declared the winner before trial. Do you get paid up front, and have to refund the judgement if you lose?

OK, fair point. The fact that Dominion is $1.3 billion-worth of pissed off doesn't prove they're innocent. My original comment was by way of refuting Theadora's ridiculous "Dominion ... voting machines have been around and known to be rigged for more than a decade already."

Is there still time to sue Smartmatic for cheating Hugo Chavez into office?

None of the above has aged well.....LIVE: Audit Report Released To AZ Senate in Phoenix, AZ 9/24/21 - https://www.youtube.com/watch?v=GnLpd7MkGL0