Richard Hoagland's digital radio show is in trouble. The problem of finding guests who can be coherent from 3am to 5am EST has not been resolved and most likely never will be. Last week's shows included four re-runs and one open lines. And then there are the technical problems, which Hoagland ascribes to the CIA deliberately corrupting his audio stream. I kid you not.

Kerry Cassidy went two better today, complaining that not merely the CIA but also the NSA and the Vatican were messing with her stream. 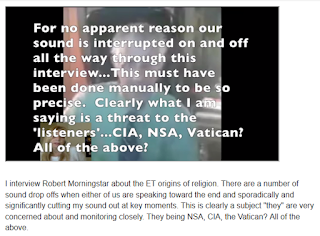 I confess that I only sampled this vidisaster, so it's possible I may have missed gems of wisdom. What I saw was Robert Morningstar appearing half asleep and pretending expertise on physics, cosmology, theology, biology and ancient history. His true expertise is in frisbee, as we know. Happy Christmas.

I was browsing my Faceboo archives the other day, as you do, and was struck by how much fun we had back in 2011, before Richard Hoagland figured out that it was possible to ban people from commenting his page.The best part by far arose from the monster 9.0 earthquake that hit off the coast of Fukushima on 11 March that year. Hoagland's commentary was pure Texas sharpshooter, and I commented:


JC: I notice you want to force the Sendai earthquake into confirming your nonsensical theories by falsifying its longitude, just as you falsified the latitude of the Port-au-Prince event.

I notice also that you cover yourself by writing, on this page, "we are NOT talking about precise longitude and latitude "lines" ... but "bands of activity" -- as with any physical process." I remind you that the junctions of the major tectonic plates are known with far more precision than one degree of latitude or longitude.

JC: I also notice that you attach significance to the 38° 19' latitude of the Sendai earthquake as double 19.5. Your theory as published predicts energy upwelling at 19.5°, NOT twice that or three times that or any other multiple of it. What you're doing here is the equivalent of shooting an arrow into the side of a barn, then painting a target round it. About as far removed from science as can be imagined.


Well, eventually, Hoagland protested — with this piece of smasheroo peacockery:

27 mar 2011 05:30 EST
RCH: I"m somewhat surprised that this is seen as ANY kind of "legitimate" discussion point; this is, so Facebook has informed me (by putting MY name at the top of the page)--

My "room."
...
The idea that I should then have to put up with "repeated, malcious [sic] assaults on my own character -- in "my room" -- or suffer even more outlandish attacks on my decades-long, demonstrated scientific competence [just how many of these "critics" have consulted for a major television network (and a "living legend" at that network at same time) -- both, BEFORE they were even 23?]--

And then, went on to consult for NASA!

That I should NOT simply "throw these bums out of my 'house' " ... is simply cracked.

I also will NOT argue"with "fake people" -- whose SOLE reason for coming here ... and then, " hiding under a deliberately false identity," is to AVOID the normal social ACCOUNTABILITY that comes with "face-to-face communication"-- while getting the vicarious thrill of attacking "the Big Man" ... in front of countless thousands of his "fans."

It's the ultimate "ego trip" ... for very warped minds.

I mean, what kind of an "honest, intellectual discussion" can one possibly have ... when one participant is publicly known, but the other is "a shadowy, ANONYMOUS figure ..." -- obviously AFRAID to reveal even his identity, yet spring-loaded to attack the slightest perception of "weakness" in his opponent?

The pretense that, somehow, a "serious, SCIENTIFIC discussion" could be carried out under these bizarre circumstances--

In setting up the Constitution, the Framers recognized that the SOLE deterrent to the old abuses of Europe, the "whispered innuendo in dark" -- where you could be accused of ANYTHING and (literally) dragged away  ... and then, had to PROVE your innocence -- was backwards; that free men (and women) are INNOCENT 'til  PROVEN guilty; that the "burden of proof" was NOT on the "accused" ... but on the "accuser"--

Who is impossible to fight ... when your accuser is, by calculated design, "anonymous ....

Shades of "hooded men and secret star chambers ..." -- from our own sad history ... where the "anonymous accuser" is the judge, the jury ... and ... the executioner.

So, no, I have absolutely NOTHING to "apologize" for ... on my own page (!) -- and I will continue to eliminate ALL "agent provocateurs" ... whose REAL agenda is to make it IMPOSSIBLE for the overwhelming majority of honest folks (*sopme, ~15,000 now) who come here to have a serious, OPEN discussion ... in these increasingly critical and uncertain times!

Read that again and you'll grasp the idea that he refuses to accept any review of his work unless the reviewer has had a career path identical to his own. And what evidence did he have for asserting that "James Concannon" is a false identity? None at all.

And then this happened
On 7 April, the same area was rocked by another 7.1 earthquake, causing more damage on land and killing three people. Hoagland commented:


RCH: That "Fukushima" was a Planned Event -- by "someone" -- is almost a certainty now; I mean, what are the odds of ANOTHER major quake (the 7.1 a couple days ago) -- complete with similar tsunami warnings -- with an epicenter (and depth!) only a few miles different from the earlier, devestating [sic] 9.0 quake ... and all, by "acident?!"

JC: I think it's called "aftershock," Richard. Look it up.

The fact that he didn't realize then that he could simply ban me was made obvious a bit later:


5 june
RCH: What "JC" and all the OTHER trolls don't seem to realize, is that with ~17,000 people on this site on a regular basis, I have a team of "moderators all around the world, 24/7" -- whose ONLY instruction is to delete EVERYTHING these idiots have to say ... unless I give specific instructions to the contrary .... :) I will NOT have this site disrupted by obvious "agents."

Then finally the penny dropped, as they say:

Bill Ryan, the former main squeeze of Kerry Cassidy, sees even more terabytes of dodgy information than I do as I trawl the rat-holes of the w3 in search of blog-worthy material. When the schism between Cassidy and Ryan happened in 2011, Bill continued the King Arthur theme of their lives by forking off Project Avalon from Project Camelot.

The Project Avalon forum, describing itself as "Chronicles of the human awakening ...where science and spirituality meet" provides the above-mentioned dodgy stuff on an industrial scale. Bill Ryan advocates using a formal source and information reliability protocol to evaluate outlandish claims such as those put into the public record by his former paramour. The one he uses is a two-dimensional assessment, rating Source Reliability on a scale of A-F, and Information Reliability on a scale of 1-6. I'd reproduce the whole thing here, and it would probably read OK on a desktop computer screen, but it would drive my hand-held/mobile readers crazy.

Suffice to say that the gamut of Source Reliability runs from RELIABLE to UNRELIABLE, and that of Information Reliability goes from CONFIRMED to IMPROBABLE. You can see the whole scale here.

Bill assigns himself a reliability of  A2, which translates to "No doubt about the source's authenticity, trustworthiness, or competency" and "Logical, consistent with other relevant information, not confirmed." Amusingly, Kerry Cassidy gets a B2, the B meaning "Minor doubts. History of mostly valid information." I don't read enough of Bill's stuff to assess him myself, but I definitely had a guffaw when I saw that Kerry's information is rated logical and mostly valid.

I have to agree, however, with Bill's rating of Corey Goode as E4. If you don't know Corey Goode, here's a primer. Take Andrew Basiago, who claims to have lived on Mars with President Obama, then exaggerate his claims about 200%. That's Cory Goode.

I'd now like to propose my own two-dimensional assessment tool, as follows:

On this scale, some of our favorite whipping boys would rate as follows:

This post will be not so much mockery of pseudoscience as of what we may call pseudologic. Predictably, Kerry Cassidy the ultimate conspiracy theorist was not content to accept media accounts of last week's appalling mass murder at the Inland Regional Center in San Bernardino, even though those accounts are as consistent as we might expect.

To Kerry, every tragic event is a false flag of some kind. San Bernardino simply joins the World Trade Center, Sandy Hook, the Boston marathon, Charlie Hebdo and Paris on Friday 13th as the latest highly suspicious event. She not only labeled this as a false flag, but also took off into the following flight of fancy:


"Jim Stone has done an excellent run down of the things that don't add up and the false flag bell ringers ... the shooters were found dead in hand cuffs...!  How does that work?  Obviously Manchurian candidates unbeknownst even to themselves.

"I however, see something else going on here.  Why health inspectors and health professionals?  Was a bio-weapon about to be released?  Did someone within the group at the party stumble on something they weren't supposed to know about a planned biological attack?  So did they do a mass shooting to hide the person or persons they were targeting so no one would know why?  Sure gun control is a likely outcome that those behind the scenes who actually masterminded this exploit would have but what if it goes deeper than that?"

Please read that attentively. Then ask yourself, if the aim of Syed Rizwan Farook and Tashfeen Malik was to cover the knowledge of a biological attack, how successful was it? They massacred 14 people outright, but left 21 merely injured. We don't really know if the attack took the form of a random hosing of bullets at the crowd, à la Bataclan theatre, or the individual targeting of 35 victims, but it hardly matters. The fact is that 21 scathed people, plus at least 40 who were unscathed, lived to tell the tale. So quite obviously, if any dire secrets about bio-weapons came out at the party, they aren't secret any longer. The bottom line here is that those vile assailants intended to kill 35 people but only managed to kill 14. The proposition that every single person who had knowledge of a supposed bio-attack was among the 14 dead is logically unacceptable. Of course, if tomorrow or next week one of the survivors turns up on CNN saying that yes, a Big Secret was spilled at that party, I'll apologize to Kerry and put a line through this entire article. I do not expect to be doing that.

In a sense, the same logic can be brought to bear on other tragedies that Kerry Cassidy has labeled as trumped-up. If Sandy Hook, almost exactly three years ago now, was staged in order to justify disarming the citizenry, it didn't bloody well work, did it? If the attackers of Charlie Hebdo were really government operatives wishing to create a culture that would accept expulsion of Muslims from France, that bloody well didn't work either. If anything, it's Jews who are leaving and many more Muslims who are arriving.

My opinion is that Kerry Cassidy uses these events purely to draw attention to herself and her boring "TV Network," and doesn't really think before writing her peremptory accusations. After the Charlie Hebdo massacre, she wrote "Where are the bodies?", as if she expected full color images of the corpses before she'd believe it even happened. Totally ridiculous.

To me, before anyone labels an operation a "false flag" they should first apply the following test -- did it work?