Mike Bara is just obsessed with the false idea that there's a secret US moonbase. He's totally wrong, as I pointed out in critiquing his books Hidden Agenda and Ancient Aliens and JFK. Just last month, I reviewed a long article by Clyde Lewis that repeated a couple of Bara's fantasies, namely:


Tell the truth
In last night's vlog, titled "Tell the Truth Wednesday", Bara mentioned both those fantasies all over again, and spent quite a long time talking about what he called another US secret space program. "It was totally secret," he stated. It was something "that nobody ever told you about." He even said "we were lied to back in the 60s".

OMG, a real secret??? What could this be??? Well, it turns out that he was talking about the USAF's dream project, the Manned Orbital Laboratory. Just like Project Horizon, the point to bear in mind about MOL is that it never flew. As for its secrecy, it might have been classified for a year or two but it became public knowledge in December 1963. It was cancelled in 1969.note 1 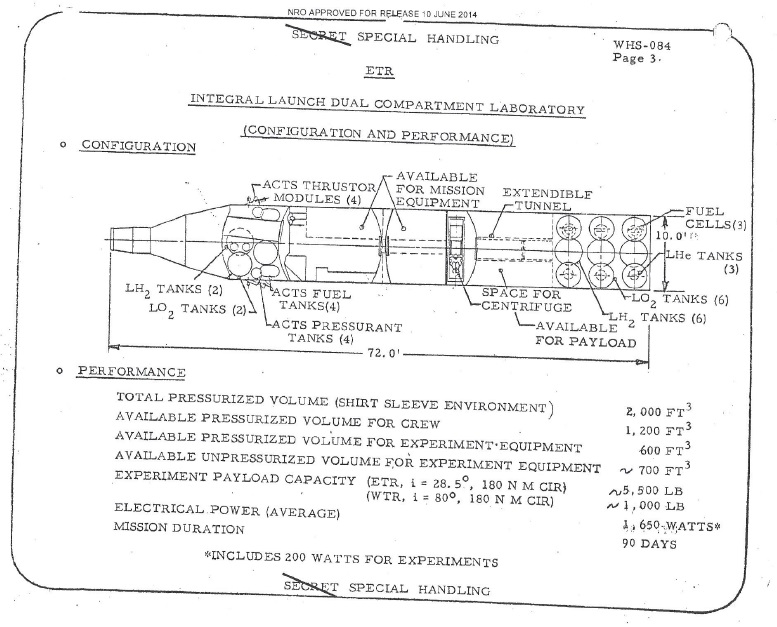 Bara got all excited about this image posing 14 of the 17 MOL astronauts. This, apparently, is what he meant when he said "we were lied to"—meaning, we weren't told about these astronauts. Well, we sure were when this picture was released, weren't we?

So if Mike Bara wants us to believe that MOL, like Horizon, may not have really been cancelled, he's going to have to explain how it could have continued when at least seven of its key crewmen had moved on to NASA.

Bait 'n' switch
Bara obviously thinks dark hints about seekrit space programs have consumer appeal, and perhaps he's right. But his problem is, he can't deliver what he promises his consumers. In 2016 he wrote Hidden Agenda: NASA and the Secret Space Program, but he was forced by lack of honest material to pad it out with Vimanas, The EM Drive (which not only has nothing to do with space but is also notably UN-secret), Explorer 1 (which he totally mis-reported for the third time), the early unmanned moonshots, and technology transfer from the Roswell "crash." When it comes to actual space programs, all he has in his black bag is these military dreams that were cancelled before ever coming to fruition. I hope his readers are suitably annoyed with him.

Solution to the Spring acrostic

"As she watched him work, Andrea wondered what it would be like to be his girlfriend. She knew he had money, that much was obvious from the way he dressed and the silver-gray Maserati he always drove up in. But more than that, he was sophisticated, mysterious and interesting."

Lightbringer is Mike Bara's first and so far only work of fiction. I chose this excerpt to mock Bara for his simplistic views about women. Feel free to roll your eyes as I did when I first read these words.
at 6:39 AM 2 comments:

Email ThisBlogThis!Share to TwitterShare to FacebookShare to Pinterest
Labels: acrostics

Mike Bara does something useful for once

I guess we all know by now that, whatever nonsense Mike Bara writes and talks about in his books and TV appearances, at least he's a firm advocate for the reality of the Apollo program. Many years ago, he co-wrote with Richard Hoagland and Steve Troy a 2-part essay titled "Who Mourns for Apollo?" (the title echoes the Startrek saga Who Mourns for Adonais?). It's still up, and you can have a look if you wish:

Bara copied large swaths of that text into a chapter in his book Ancient Aliens and JFK. It was bizarre, I thought, because the chapter had no justification in a book that pretended to reveal the villains behind the assassination. It was just makeweight, I guess, and I wonder what Bara's co-authors thought about that.

Well, now Bara's one of three frontmen re-hashing that material, just in time for the Apollo 11 50th anniversary, in a six-ep TV series for The Science Channel, Truth Behind The Moon Landing. First ep coming up on June 2nd.

Let's hope this six-parter gets a decent audience. Far too many people now believe the bullshit theory that the spectacular Moon landings of 50 years ago were all a spectacular hoax.

P.S. There's that dodgy "never-before-seen" claim again. It was made on behalf of the recent Apollo 11 movie. As a die-hard fan of spaceflight, I loved the movie but I didn't see any film sequences that were totally unfamiliar. The compo included higher-definition film than TV usually shows, but that's a different claim, isn't it? I'll watch Mike Bara's series but I'm not expecting to see anything new. Clavius Moon Base covered all this material very well years ago.

P.P.S. It's been pointed out that many of the shots of the spectators at the launch were original. OK, I guess I have to concede that.
at 7:58 AM 37 comments:

Mark Richards put finger to keyboard on 24th April to spew verbiage into the world-wide web, starting with this paragraph:


"My family and I found ourselves in an unenviable position this winter, as the Fake News pundits set some English cyber bully into full attack mode in our direction. He opened his attack with a series of interviews with some questionably one-sided ‘witnesses.’"

Well, it doesn't take a genius to decode that. The "English cyber bully" is Kevin Moore, who is in production on a video documentary provisionally titled Richard Baldwin: A Murder in Camelot. We don't yet know who all the witnesses are—in fact, Moore seems to have run into a bit of production trouble and is said to be back in the USA doing some reshoots—but we do know that one of them is Richard Dolan. Dolan made a mortal enemy of Kerry Cassidy by agreeing to the interview, as I reported last October. Dolan is not a man to leap to conclusions or to speak hyperbolically just for effect. He considered the facts and came to his conclusion that Mark Richards the convicted murderer is dangerous, disturbed, and sick.

Richards considers that a one-sided attack. But Moore also interviewed Kerry Cassidy at great length, and also shot video of a conference at which Richards' current wife Jo-Ann was speaking, last October. Now Moore has said he won't be including any of Cassidy's interview because she does not want to be on his show. As for Jo-Ann, she wrote a week ago:

So that takes care of the only two people in the whole wide world who would speak kindly of Mark Richards. As a federal prisoner, Richards himself is not eligible for a video interview. In the circumstances I don't think Kevin Moore can be blamed for presenting a biased case. I'll leave it to him, if he reads this, to refute the idea that he was set to make his documentary by "the Fake News pundits."


"Mark graduated from high school in June 1971. I have proof of that. Mark has just sent to me additional proof as well – prison documents that verify his high school graduation and five college degrees. I will post these documents soon on my blogsite. I should also soon have their verification of his military career.
::
When the time is right, I shall point out flaws in what Kevin has been reported [sic]"

This year so far, all of us who try to follow spaceflight and space technology have been mightily impressed by SpaceX's incredible feats of rocket retrieval, by China's demonstration of prowess (not only soft-landing on the far side of the Moon, but providing the lunar orbiting relay station that made it possible), and by a fairly spectacular woopsie from Israel.

I try to keep up on the private enterprises that are now seriously in the space business, but every time I read another magazine article or blog post on the subject I get humiliated by how much has been going on that has totally passed me by.

Never more so than when I opened the current issue of New Yorker to find the 8-page article by Rivka Galchen, The Eighth Continent (sub-title The new race for the moon, for science, profit, and pride). Galchen is a Canadian author and magazine contributor, who has previously written for New Yorker on the topics of Quantum computing, weather, and earthquakes.

Ms. Galchen has been out and about in what Tom Wolfe called the low-rent facilities of the new space pioneers. Check out what she found:

* The telerobotics lab at the NASA-funded Network for Exploration and Space Science, which is developing 3-D printing technology using lunar regolith as the print medium. "You could print the wrench you need to fix something," says Jack Burns, NESS's director.

* Celestis, a funeral service company that already launches its clients' ashes into space and plans to send them to the Moon.

* The Mojave Air & Space Port, where many of those new pioneers have set up shop. Masten Space Systems is developing reusable rocketry there, with plans to go to the Moon in 2021. The company's pet rocket is the Xodiac—remember that funky name, it'll be in the news soon.

* Honeybee Robotics, in Pasadena, is developing standardized lunar rovers and has its eye on asteroid mining.

* Moon Express, another lunar exploration company hoping to deliver its first lunar soft-lander in 2020. It was that company's vice-president, Alain Berinstain, who first called the Moon "The Eighth Continent".

Experience leads me to believe that not all these projects will come to fruition. Most will be delayed, some will fail altogether. But that article convinces me that private-enterprise Moon exploration and exploitation is just a few years away.

For the next week or so, the whole article can be read online at this link.

Update:
More humiliation came my way when I read Bob Zimmerman's blogpost today and learned that the Japanese company Interstallar Technologies has just completed the first successful sub-orbital flight of its MOMO rocket.
at 12:07 PM 6 comments:

Get out those pencils and erasers. It's time for another acrostic puzzle, with a theme appropriate for this blog.

Answers will be posted after Memorial Day, 28th May.

For general instructions on how to solve acrostics, see the previous 'Emoluments' puz.

Update:
I've now started a new blog specifically for acrostics. It includes commentary as well as a monthly puzzle.
at 9:52 AM No comments: