Vanity thy name is Bara 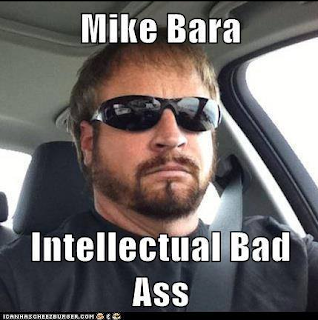 Mike Bara didn't create the caption himself, but he liked it enough to make it his FartBook profile pic.


"I am truly impressed at the lengths some people will go to hate on me. I must be doing something right."


No, Mike, you're doing something WRONG. Publishing utter nonsense.
at 8:43 AM 12 comments:

Mike Bara is wrong about kksamurai

Mike Bara performed yet again on internet radio last friday. This was a 90-min drone-athon on the Inception Network, semi-wittily titled The Stench of Truth. Host/interviewer was Ted Torbich.

Want to guess how much truth Torbich got from Mike? You're right — none. It was all the usual stuff we've heard before. Glass on the Moon is 2x stronger than steel (no it isn't, that's nonsense). There are unmistakable glass towers at Sinus Medii (no, it's crap on Hoagland's scanner glass). Bla bla bla. Paperclip, spire, robot head. Bla bla bla. The reverse of the truth.

A goodly slice of time was spent on the non-existent Daedalus Ziggurat. Bara came right out and called Stuart Robbins a liar, in reference to Robbins' rebuttal of Bara's claims. He said that his critics use personal insults in preference to logical argument, when we all know it's Bara who calls the critics douchebags and morons. Females are called too ugly to reproduce, and males are called homosexual.

None of this is new. One little nugget that was new, was Mike Bara denying that the image showing the ziggurat was originally the work of Terry James, a.k.a. kksamurai. I can refute that very easily. Here's the original:

I got that from Holloworbs. Easy. I believe it dates from around 2000.


Update:
Using the wayback machine, Terry James' work can be narrowed down to 1999. On May 4th he published a "coming soon" announcement for this book, to be self-published by Radical Science Publications: 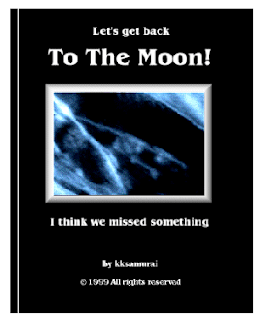 I can't confirm that the book was ever published, or that the ziggurat image was included. Neither does kksamurai specifically admit that he shopped the ziggy. In fact, he writes that someone called Frank made the scan. That would be Frank Gault, who had a large collection of Apollo imagery inherited from his ex-NASA father. Frank was an accomplished artist, and at the time a promoter of the 'Face' on Mars, although he later became a skeptic.
at 5:05 PM 46 comments:

I sent this to Mike today:


I see where you are claiming that the direct imaging of a large planet 56 AU from HD 95086 [note 1] "Totally supports the fission model of planetary formation."

Your statement is not true. The mere existence of a single massive planet accompanying a star tells us nothing about its formation. It could as well be explained by accretion, fission, or capture. Before astronomers could even begin to make deductions about the formation of such a planet, they would need at least some information about its orbit, and preferably about many other planets in the same system.

As you know, a key part --almost the only coherent part-- of the evidence Van Flandern [note 2] presented in support of planetary fission was that planets in our own solar system seem to occur in pairs. I remind you of what Van Flandern (1997) wrote:


"The spin-up of the proto-Sun will make it first oblate, then prolate as it approaches an overspin state where centrifugal forces exceed gravitational forces. This shape is called a “Maclaurin spheroid." When the star-disk boundary reaches the overspin condition, the two prolate bulges on opposite sides of the proto-Sun break away and form twin proto-planets in low orbits just above the proto-star surface in the inner disk."


Accordingly, you are not permitted to write that HD 95086 b supports the theory in the absence of a twin companion.

As you probably also know, the fission model is in difficulty when it comes to explaining planetary differentiation, and in further difficulty now that a proto-planetary disc has been observed in the Orion nebula [note 3].

I might add that I'm surprised you have not considered yourself permanently disqualified from writing about this topic, since the unforgivable errors on p.34 of The Choice have been publicly exposed and mocked.

I copied the text to Mike's manager, Adrienne Loska, which generated this auto-reply:

Unfortunately, Mike has informed me that you are too stupid to converse with, and in fact that the entire Universe is dumber for having you in it. Please take a moment to thin the heard and improve the quality of the gene pool by removing yourself from it.


Evidently, Adrienne is as weak on spelling as she is on cartography.

Mike's e-mail is mikebara33@gmail.com. Adrienne is mike.bara.mgmt@gmail.com.
at 7:32 AM 23 comments: