Which is it, Robert Morningstar?

The civilian intelligence analyst who is wrong about almost everything seems now to have arrived at a final version of his article about the Las Vegas massacre of 1st October. The piece is titled LAS VEGAS VIDEO IMAGES AND SOUNDS PROVE MULTIPLE GUNMEN COMMITTED LAS VEGAS MASSACRE, and his serial amendments have served only to confuse the issue. 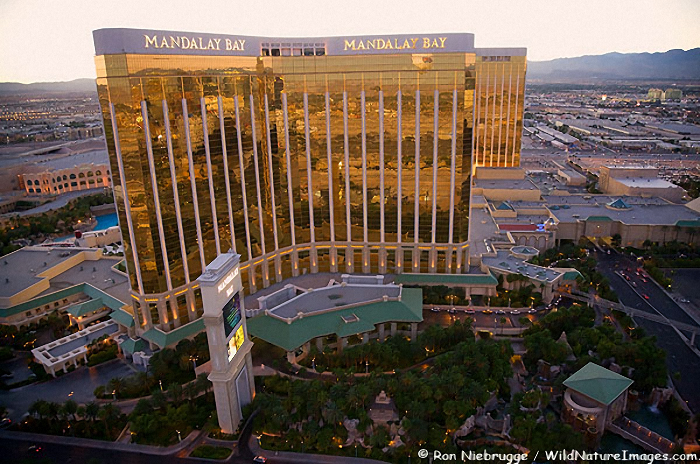 Morningstar writes "I’ve corellated [sic] the videos linked below with this external photos [sic] of the hotel to triangulate the postion of the 2nd Mandalay Bay Hotel shooter who fired from a low platform atop the green roof porch shown above." (emph. added) The videos referred are the taxi driver's video and the video from the hotel across the street (that would have to be the Desert Oasis Motel, a crappy one-storey building.)

My comments about that are, first, that at no time did the taxi driver have a view of that platform. As she approached the drop-off from the north she could see the sloping green canopy edge but not the gray platform AM* wants for a gun position. My second comment is that the Motel video is useless—the flashes seen on it are from around the tenth floor, and there are no broken windows at that level. I also note, as I have previously, that triangulation is not what the intelligence analyst did. But anyway, that's a clear statement of where he thinks a second gunman was.

He continues "The Las Vegas Taxi Driver’s Video caught a shooter firing from the lower floor of the Mandalay Bay from a very close vantage point, i.e., pulling out of the Mandalay’s Drive-Though entrance." That would have to be something like this frame, at 04:59: 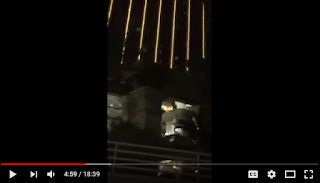 Here's an approximate daylight version of that view from Streetview: 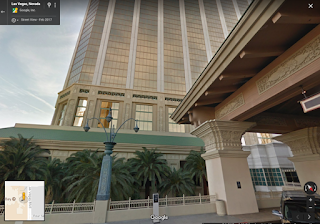 Again, the absence of broken windows absolutely rules out gunfire from any floor of the hotel except Paddock's suite on the 32nd.

He continues "By comparing frames and correlating the driver's position and the camera angle to the shooter's position (indicated by the gun flash) in that frame, and using a triangular section of the unique roof (poviding two 90 degree angles for precise referencing,  I was able to calculate the shooter’s position to be outside the hotel and shooting from a balcony that covers the drive-through entrance of the hotel."

Once again, the taxi driver had no view of that balcony area at any time. At the moment when she pulled out of the covered area, such a view was doubly impossible since the roof area was above and behind her (see image above.) I've looked at that section of the video multiple times and I do not see a gun flash, and neither do I see two 90° angles. It's my belief that the shooting had stopped by that time anyway. No used shell casings have been found anywhere on that balcony or rooftop.

So Morningstar has offered us four gunnery positions, all of which are impossible:
WRONG AGAIN, frisbee genius. 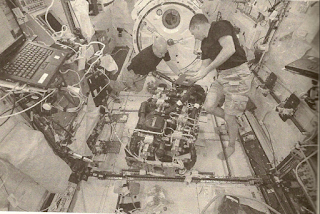 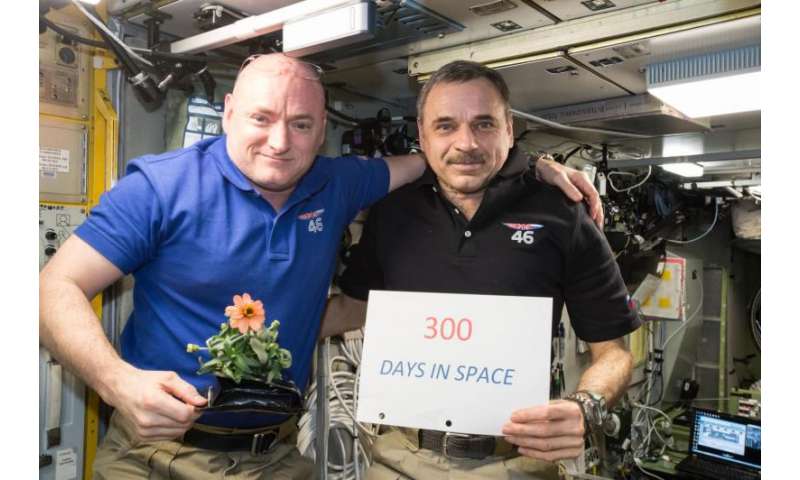 [1] Seedra is just a pronounceable form of the acronym CDRA, Carbon Dioxide Removal Assembly
at 8:46 AM 2 comments: