if I'm so wrong about so many things, why do you psychos go to such great lengths to try and silence me?

That was Bara's question to his FarceBook fans yesterday. Mike, dear, the answer is simply that we are defending the truth. It's not so much that we want to silence you as that we want you to say or write something that's FACTUAL. For bonus points, also apologize for misleading the audiences of Coast to Coast AM, Ancient Aliens, and Einstein-only-knows how many really awful pseud-psych Internet radio shows hosted by ignorant noo-noos (Yes, Melissa, that's you).

The question was triggered by the appearance of an imp in the tweetosphere, mocking our Mike in what I think is a rather childish way. It's fairly harmless as it stands, but what I fear is that whoever the imp is will be driven to post more and more outrageous stuff until it gets too disgusting to bear.

Mike's own opinion was that the critics are jealous because he's more important than them. Well, we've heard that one before, and I don't quite understand how "importance" is measured. If it's by appearances on pseud-psych radio, he's got me beat for sure. However, I protest that I'm not jealous — no, not even one tiny bit.

Fan #1 posted an explanation which is what I really want to comment on today: "You receive the most flak when you are over the target." That's a very, very common reaction pseudoscience has when its fallacies are pointed out and described. Richard Hoagland pushed the exact same button when he wrote to me, on July 25th:

The more you guys howl, the more certain I become that we're "onto something ...."

So this is the theory. Critics only voice criticism if what they are criticizing is actually true, or very nearly true. The problem is, they never observe the logical converse. Did any pseudo ever say "I'm not getting any criticism, so I must be wrong"?

Update:
Mike managed to be wrong YET AGAIN during a very brief appearance on Coast to Coast AM last night (29 nov), commenting about Project A119. He said "Explorer 1 ended up 600 miles too high because they didn't understand the physics."

As this blog has pointed out many times, Von Braun understood the physics of satellite orbits very well. It's Mike Bara who plainly does not. The semi-major axis of Explorer 1's orbit (which is what counts) was 4868 miles. That was about 300 miles, or 6.5%, greater than planned. Easily explained by variability of the solid rocket fuel of the day. WTF made the C2C-AM producers think Bara was any kind of expert on this?
at 7:58 AM 18 comments:

Nah—just kidding. Mike wouldn't do that. But I couldn't resist teasing him when he announced a special 'Black Friday' deal on his primitive blog.


Isn't it time for a corrected edition? Your readers surely deserve better than fuzzy pictures of Proclus, Asada and Picard when LROC strips of these craters exist at 100x better resolution.

It would give you an opportunity, too, to retract the Italian scan of East Massif -- given that Davide De Martin, who did the scan, has said the "spar" is a scanning fault.

I hope you'd also eliminate your excruciatingly wrong paragraph about the appearance of Earth from space.

On the other hand, I guess the down side is that, if you corrected the book, there wouldn't be much left of it.

New readers can decode the text by referring back to these bloggeries:

Any bets on whether he'll allow the comment to appear?

Looks like we're going to have to add one more to the list of Richard Hoagland's empty promises. Eleven days have gone by since he promised his Coast-to-Coast AM audience that he'd "soon" put up on his 1990s-style web site a compilation of images from the Curiosity rover that show "unmistakable" signs of artificiality. Nothing has appeared unless you count a promo for the Mayan Galactic Alignment crooz. Hoagland will, he says, be conducting nightly starwatches and so won't have to pony up the $1500 the plebs will—although, what's the betting he won't show for some of those? (Robin Falkov will be sent on deck to explain that he's in his state room working on a very important project).

So here's a Fail-list, which may not even be complete:

1. Curiosity image compilation, promised on C2C 2 nov 2012
Update: Plus the ruined apartment blocks he described on C2C 16 nov. He said these images would be on the web site "in a few days."
2. "Major paper" on the Accutron readings during the June Venus transit. Hoagland wrote to me on 24th July "When the paper is published, you will have ample data to examine ....Soon."
3. Accutron data on the Annular eclipse last May. He did write a preliminary report, but never followed up. James Concannon blogged about that.
4. Accutron data on the Lunar occultation of Venus, last August. On 3 Aug Hoagland wrote to me "it's really nice to see you're paying such close attention to all this.  This means you WILL, indeed, be "blown away" by the full data set on the eclipse, to say nothing of the OTHER Accutron torsion measurements we will soon be publishing ... on the later Venus Transit, and an up-coming, striking "Lunar Occultation of Venus" occurring August 13th." This has never been mentioned again.
5. A book, The Heritage of Mars: Remembering Forever. This was announced on C2C, 2 April this year. When I blogged it, I also noted that this was the second time around. He first announced this book back in November 2000. It's possible that the book is imminent, but I doubt it. It's a bit late for the Christmas listings already.
6.  New video documentary, hosted by himself and produced by Jay Weidner. Promised in November 2007. I blogged about this last January.
7. Von Braun's Secret Part III. Promised in 2008.
8. The Bees' Needs, Part II. Said to be "Currently in Preparation" back in 2007.
9. Moon With a View, Part VII. At the end of Part VI, Hoagland wrote "Coming soon: the extraordinary Part 7 Conclusion of 'Moon with a View'". That was 2005.
10. Video of the Joshua Tree Conference, also 2005. The promo describes this as a "breakthrough, lavishly illustrated, 2-hour, Wide-Screen, 2 DVD-set Presentation." It never appeared.

You were SO, SO WRONG about the eccentricity of the orbit of Mars.

You were SO, SO WRONG about the orbit of Explorer 1.

You were SO, SO WRONG about centrifugal force.

You were SO, SO WRONG about the ziggurat on the Moon.

You were SO, SO WRONG about Pad 33 at White Sands.

You were SO, SO WRONG about light penetrating the ocean.

You were SO, SO WRONG about the Presdential election.

You were SO, SO WRONG about how the networks would report the Presdential election.

Isn't it time for you to STFU??

"There's a sneaker on Mars" --Richard C. Hoagland, last night on Coast to Coast AM

...and not just any sneaker, but a Nike sneaker. Hoagland said he's putting together a video presentation of the many "unmistakably artificial" objects captured by the cameras of Curiosity since the triumphant landing on 6th August. Apparently he showed some of these to a paying audience at the recent Conscious Life Expo in Los Angeles, and was rewarded by "an audible gasp" when the sneaker had its Powerpoint moment of fame. We'll have to wait for his video to see what he means (and by the way, he said it will be free—that produced an audible gasp from me), but I suspect it'll just be this smooth rock imaged by the navigation camera quite early in the mission. 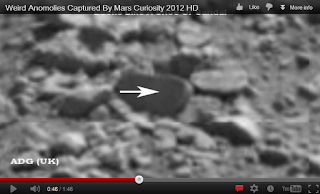 Update: No, it's this rock — enhanced by an added black border, I see:

You have to wonder about the mental age of his audience, who apparently didn't stop to think a) How Hoagland knew it was a Nike, or b) WTF a sneaker of any kind would be doing on Mars, where they don't play basketball or even tennis.

However, the primary sujet du jour was not sports footwear, but methane.


Methane on Mars
"The bottom line is that we have no detection of methane so far," said Chris Webster at a JPL press conference yesterday. Webster is the man on the Tunable Laser Spectrometer, which could have detected methane at a concentration as low as 10 parts per billion, if it had been present. Richard Hoagland was hustled (or maybe hustled himself) onto the radio show to comment.

Hoagland, actually, did not get it all wrong. He reminded us that methane in the Martian atmosphere appears to be a seasonal phenom, and Curiosity is in winter conditions right now. He said "this is a first look, just one data point." All that is true. He reminded us that micro-biological activity is not the only possible explanation for the emanations, and that the true test will come if and when the JPL boffins can detect which carbon isotope Martian methane favors (C12 would be a strong indicator for biology rather than volcanism.) True againnote 1. Well done.

If only he'd stopped there, we could all have gone back to sleep a little wiser. But no, he had to spoil it in the second hour by proposing a third possible methane theory—namely, that the gas was periodically oozing out of the long-buried rotting remains of the Great Martian Civilization that built the Face at Owen Mesa before being obliterated by a planet-busting impact 65 million years ago. That, of course, has no chance whatever of being the correct explanation because if there were such a civilization, there would be plentiful other remnants of it to examine. And I don't mean Nike sneakers.


More artifacts
Lack of evidence, of course, has never deterred Hoagland in the slightest. If he needs some, he invents it. Not just the so-called Face, but a Sherman tank, a crashed spaceship in the side of a crater, bits and pieces of machinery. These he has pointed to in images from previous rovers. Now, with Curiosity offering superb image quality, he finds the sneaker, a 100ft metal plate, and a printed circuit board ("looking like it was exposed to a nuclear flash," he said, as if he knew perfectly well what that would look like).

The man's mind simply doesn't work like yours and mine. He says that NASA statements at press conferences are coded—"You have to know how to read between the lines"note 2 (in other words, the statements can mean whatever he wishes they meant.) Last night's runaway prize-winner for zaniness was "We're dealing here with two separate missions, one all about the usual geology and the other about the technology of the ancient civilization" (not a verbatim quote but close). The image of a duplicate "mission control" full of Hoagland clones gasping as the next Nike sneaker comes into view had me guffawing into my pillow.