Jimmy Church handed Mike Bara yet another opportunity to plug his latest book for two hours this week, on Fade to Black internet radio. Bara said it was a shame that his critics descended to insults and personal attacks rather than sticking to the facts -- a hilarious statement and the polar opposite of the truth. Mike has referred to me as "idiot",  "douche bag", "moron", "psychopath", "dumbass", and "deranged" -- those are just from memory. I don't use epithets when addressing him. I just tell him he's wrong.

I thought maybe Jimmy Church would have more spine than, say, George Noory, and perhaps challenge Bara over his wild fantasies. As it turned out, he did balk at the miles-high glass towers on the Moon, but willingly lapped up all the "unmistakably artificial" Martian objects that Chapter 8 of the book is all about.

Mike presented his usual argument from (very dubious) authority -- "I'm an engineer and I know a mechanical object when I see one." He's deluded. I made a list of the figures from Chapter 8 so you can interpret the online gallery without having to buy the wretched book. Numbers at left are page numbers.

Here's the point. Mike Bara cannot possibly know that these objects are what he says they are. In reality, the most he can say is that they look like "a wrench, a circuit board, a hubcap....etc." As one of the Amazon reviewers wrote, it isn't enough that it looks like a duck. It has to walk like a duck and quack like a duck, too, before you can be fairly confident that it's a duck. Translating that into science reality, to be remotely convincing he'd have to give us supporting data. Geochemistry, metallurgy, for example -- even some context and scale would help. Does such data exist? Maybe -- we can't tell because 90% of his images come at us without any reference to the original images in the various online libraries. Bara himself has written on more than one occasion that random imagery without such references is useless. So Chapter 8 belongs in the bin along with the rest of the book.

The debate that almost happened
Stuart Robbins, the astronomer who Mike Bara hates and insults even more than he does me, has given up trying to stage the radio debate with Mike on Coast to Coast AM that was agreed to last year. He has half-persuaded Jimmy Church to host such a debate, and the prospect was discussed this week. Jimmy said he thought it would "make good radio," and Mike seemed to agree, but then backed off somewhat with "What's in it for me?"

Late in the show, with only about 12 minutes to go, Stuart got through on the call-in line and it seemed a deal might be made there and then. However, Jimmy Church inadvertently dropped the connection to Bara so that was that.

To make conversation, Jimmy asked Stuart to comment on an image that Bara says is a flying saucer on the Moon. It's one of his details from AS11-38-5564.

Stuart played it exactly right, saying "I have no idea [what it is]" and adding "That's what we do in science -- if you can't really pull it out of your data, then you have to say 'I'm not sure, we need better data.'" If only Mike Bara the infallible engineer would understand that.

PS. Here's the "flying saucer" in context, at the extreme left edge of the Moon, showing how those angular shadows get created. 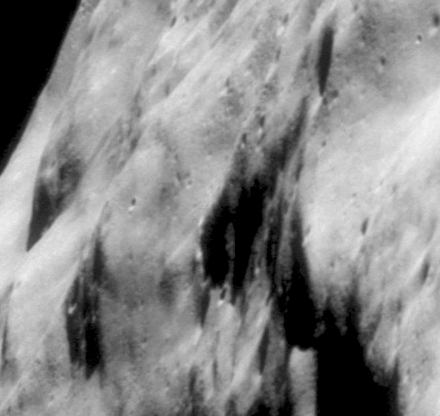 GN: "Let me ask you this before we take calls. How many Facebook followers do you have now?"

RCH: "They just go to Facebook. And... Richard C. Hoagland. And they will take you right to my Facebook page. Or you can go to enterprisemission.com. There's a link to my Facebook page. The public page -- the 'fan page' as they call it. Right at the very top.  I love to have lots of new people because the conversation that I engage in  -- and I engage in a lot of conversation with folks that come on, and want to talk to me. This is important, because if this is going to unfold the way I think it's going to unfold, it will save civilization. It will do all the things that we have to do to put America back at #1, and to set a tone for the planet, so that we, united, as a human species, reach out and figure out who the hell we are by touching ... with a human spaceflight program that will be heir to the Apollo program that John Kennedy gave us because of his vision; that everybody can be proud of, and will lift all boats. We need something as big as a war, but not a war. And this is it. If our scenario projections are accurate."


Now for the reality
Number of FB 'fans' Hoagland blocked for asking questions he didn't care to answer: Unknown, but MANY.

Did he save civilization? Well, civilization hasn't come to an end -- but I don't think Hoagland can claim any credit for that.

Did a new Apollo-type space project emerge? Far from it.

Were his projections accurate? Don't make me laugh.

Those evil NASA goons will stop at nothing

So the power went out just before Mike Bara's presentation of his crappy Powerpoint slides at the Woo-Woo conference yesterday. Annoying.

--"Please hold for the NASA Administrator."

--"Good morning, General Bolden. To what do I owe this distinct pleasure?"

--"I'll come right to the point. You're organizing a conference of pseudoscientists and dreamers in early August, correct?"

--"Yes sir, it's the second annual Contact in the Desert. This year we have a particularly fine line-up including...."

--"Yes, including a speaker named Michael Bara, is that correct?"

--"Mr Perala, it is not in the interests of this nation that those images be shown."

--"I'm telling you, we cannot allow this public display. I speak with the full knowledge and support of the United States Government. Do I have to spell it out?"

--"But General, the images have already been published. The horse is out and galloping across the moors already. It's a bit late to be closing the stable door now."

--"We believe that this Michael Bara person, thanks to his great skills at research and interpretation, and his fine understanding of planetary astronomy, may have much more to show. Information that might cause an invasion by... let's just say a very powerful intergalactic invasion force."

--"A convenient power outage is my suggestion. There's no need to get physical with Mr Bara. In fact, my understanding is that his prowess at self-defense would make that a foolhardy enterprise. He has a twin brother, you know, who could single-handedly defeat a platoon of Marines. Plus he has pet cats. With sharp claws."

--"I see. Well, it is true that power outages are a fairly frequent feature of life here. It's 106° out there, and the demands of our air-conditioning systems are very great. I'm sure that could be arranged."

--"Thank you, Mr Perala. We will be watching. And everything you have just heard will be expunged from your memory afterwards, using the same techniques we used on those Moon-walking astronaut patsies, to stop them blabbing about the alien cities on the Moon.."
at 9:01 AM 10 comments: