Kerry Cassidy has a theory

Kerry Cassidy just released the audio of an interview she sat down for with some flaky outfit called Above Duality. There's some indication that the interview was actually recorded a week earlier, but it was clearly in the thick of the current COVID-19 pandemic, because that was Kerry's first topic.

She explained that the entire population is infected by the SARS-CoV-2, but symptoms only show when the virus is "activated" by 5G transmissions. Well, that should be easy to check. As we all know, Italy and Spain have been particularly hard hit by the pandemic (deaths 16,523 and 13,897 respectively as of today).

Vodaphone has launched 5G in the following cities in Italy: Milan, Turin, Bologna, Rome and Naples.  Are SARS-CoV-2 infections clustered in those cities? No, they are not. No part of Italy is unaffected. 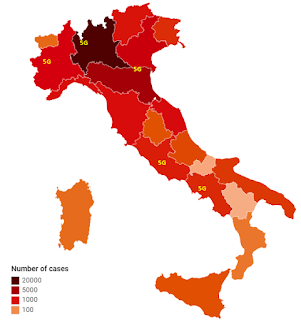 Here are the top 12 regions/cities in Spain affected by COVID-19: 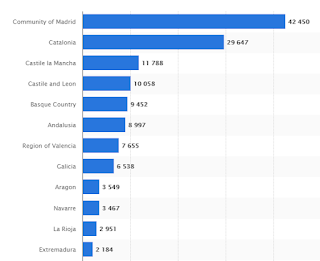 Ten of those regions have 5G available to some extent. 5G has not been implemented in either Toledo (Castile-La Mancha) or León, the third and fourth regions on that list. 5G is, however, rolled out in Màlaga, Gijon (Asturias) and Santander (Cantabria)—cities/regions that have, so far, so few cases of infection that they are not even on that list.

I might just add that many countries such as Iceland and Brazil, that have no 5G yet, have not been spared from the symptoms, and the deaths. Far from it. 5G is in 40 countries world-wide, COVID is in 190.

A unique interviewer
Kerry reviewed the years she has spent interviewing what she calles "whistleblowers," claiming that she was the first to do this. She said she is enormously helped in her interpretations of the information she gets by her superior intuition. She also praised her particular technique:


48:08 KC: I'm a very unique interviewer, and I challenge my witnesses. I also tend to kind-of play a cat-and-mouse game with them, to get them to tell the truth. And I'm also, I'm able to discern when someone is falling into what is kind of a... a recording in their head, that they then speak from. And so they get ... their tone tends to get very monotonous. There are tell-tale signs of programming. And I tend to break them out of it by asking ..and interrupting them, and asking them questions, sometimes completely what appears to be off topic. And I also have help during these interviews from ETs. ... that are tapping into me and giving me information.

I've only heard a tiny fraction of Kerry's interviews, so I can't say how true that is generally. However, at one point I did listen to the whole of her interview with Ken Johnston in February 2016. She utterly failed to challenge Ken's often-told story about seeing NASA technicians airbrushing out stars in the Apollo photographs, and let other allegations slide right on by, too. As I blogged at the time, she went off on a tangent about Brian O'Leary that was patently untrue. So on that basis, my opinion of Kerry Cassidy as an interviewer is that she's useless.

Update 13th April
Kerry C. now has a new page in which she lays the entire blame for COVID-19 on George Soros. It's so disgracefully anti-semitic that I'm not even going to link to it.

Update June
On 8th June the government of New Zealand announced that there were no longer any active cases of COVID-19 on the islands. Well done the Kiwis.