Dave Bara proves that ignorance is a family trait

Mike Bara, the world-renowned jetliner designer and predictor of all things alien on the Moon and Mars, has a twin brother, Dave. Dave is a small-world-renowned author of military SciFi, with two books published and a third in the works. One Amazon reviewer wrote of the latest:


"The eyerolling gave me a migraine and I had to put it down. With a shotgun."

Anyway, the point is that brother Dave shares with brother Mike a very, very primitive knowledge of basic physics, and a near-zero understanding of orbital mechanics. Brother Mike, remember, once told us that in Earth orbit, gravity is negligible. In his latest book brother Dave has a synchronous satellite 300 miles above an Earth-like planet. Think about what that translates to in terms of the planet's rotational periodnote 1 -- oh, there I go turd-picking again.

Today Mike re-posted this to his book of faces: 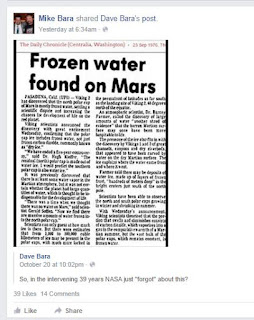 A (not turd-picked) selection of comments:

See how well-trained at NASA-hatred Mike's fans are?
See how pig-ignorant the whole bunch of them are, including the Bara dunces? They can't even tell the difference between ice and flowing water. Stop, stop, I beg you, Bara boys -- the eye-rolling is giving me migraine.

[thanks to Carol Behan for alerting me to this]

For the last couple of months, my morning internetainment has included a swift review of one of the forums in BellGab. BellGab was set up years ago for fans of the original Art Bell Coast to Coast AM overnight radio show. As history moved on, more fora were spawned to comment on George Noory (mostly "George Noory sucks"), the "bullpen" hosts, and the regular guests.

As many readers will know, Hoagland was kicked off C2C-AM on 13 July after clashing with Noory and his producer Tom Danheiser. Since 21 July he's been hosting his own internet radio show, The Other Side of Midnight, on Art Bell's Dark Matter Digital Network. A BellGab forum sprang into life, for live chat and comment during the show. As I blogged a few days later, I don't listen and don't subscribe to the archive, but the Live Chat Thread has been lots of fun to read.

At first there was plenty of hilarity over the inevitable teething troubles of a show hosted from a home office in Deming, NM by an inexperienced amateur personality -- the ringing phone, the barking dog, and most particularly the squeaking office chair. But then a wave of grudging admiration hit the forum. In the first place, the commenters seemed to love the guests that Hoagland's producer, Ross Campbell, booked. "Saucy Rossy" himself (a veteran of BellGab) posted to the thread regularly and showed himself to be a knowledgeable, easygoing guy with a very good sense of humor. And then, they saw an unexpected side of Hoagland, which they came to call his "Dick Cavett" alternate personality. This was an urbane, well-informed, engaging interviewer who could, in fact, create great late-night radio. It was transforming from a mock-in to a love-in, until this happened:

Many suspected some variation of "the irresistible force of Ross Campbell meets the immovable object of Richard Hoagland's monsta ego." There was consternation, but nothing compared to what was shortly to come:

Howls of protest were recorded. Rossy himself was an absolute gentleman, insisting that it was his own decision, he was ok with it, and please just move on, guys. But when Monday night/Tuesday morning rolled around, and the new producer (Scott McKay) was introduced, the mocking resumed. Hoagland apparently chatted with his new producer as if he was a guest, and the pair of them traded name-drops for at least 45 minutes. A few sample comments:

"oh gawd....are they really talking about 'kids these days'?"

"It's like sitting next to granddad-in-law at Thanksgiving dinner."

"It's just a private phone conversation that we are forced to listen too. Awful awful awful."

Today the forum is hate-filled. Many members say they've canceled their subs to the archive. They've come around to what this blog has been pointing out for seven years -- Hoagland is an arrogant popinjay who thinks his audience is so stupid that they'll believe anything he says as long as he keeps reminding them that he was once Walter Cronkite's science adviser (and actually, that wasn't quite his position at CBS News). A comment from "Paper*Boy" at 05:30 EDT:


"Richard C Hoagland is everything each of his detractors on this board say he is.  I hope someone mentioned condescending, and contemptible."

Since last night he roped in Robin Falkov as a supposed "expert guest" (the topic was Report from the Iron Mountain) another of the BellGab regulars summed it up thus-wise:


"Down to the wife for defense. Richard, you fucked this badly."

Very few archive shows have been made available to sample, but here's one. It's the 11 September show on Ceres/Pluto, featuring Will Farrar, Andrew Currie, Robert Harrison, and crazy old Keith Laney.

Update 14 October 6:00pm EDT
I have no idea who "ayala" is. He or she may be flying a kite for all I know. But "Coaster," a regular contributor who I believe has inside info, posted this:


Rossy made it credible with this:


"... it wasn't that long ago that I defended him vehemently. But it took multiple wake up calls and a few final big ones for me to realize how wrong I was.

I don't want this to continue because I don't want my name to ever be spoken on that show ever again. I'm proud of the work I did, but dissapointed in myself for my misjudgment. I'm too often willing to trust, and give people the benefit of the doubt and that's because I want to be an optimist, however I've learned something very valuable from all of this and that is to trust your instincts. People don't show who they really are they are right away, usually it takes six months, I'm happy it only took two in this case.

So yeah, I'm going to move forward and leave this shit in the rearview, and make something positive out of it."