As I write this, there are 184 FB comments attached to the Coast to Coast announcement of Richard Hoagland's return to the show last night. Very likely more to come, but the trend is obvious. Even the very few supportive comments don't take Hoagland's opinions seriously, but are more in the nature of  "very unlikely, but we should keep an open mind" (and regular readers will know what I think about the "open mind" business.)

"That guy is a F-ing crackpot. His "theories" hold as much fact and are as real as Santa Claus" --Chad Garcia

"I think Hoagland is off his meds - again." --Michael Lonergan

"Hoagland...a legend in his own mind." --Steve Knox

"Hoagland would find man made structures on his own pile of *#@&." --Manny Ochoa

"Hoagland  is a real ego maniac and a fraud ! He loves the sound of his own voice. He needs to go away" --Jill Gartland

"Ridiculous. Is this guy on crack? Where do they find these delusional people? Where?" --David Jefferson Pearcy

"This guy is full of crap." --Joel BiJeaux

"Is it just me, or does Hogland take FOREVER to get to a point?" --Rance Sullivan

"But "I have analyzed all the data" and you sir are nuts. Has anything he ever said come to truth or actually been proven in "real" science?" --Matt Smith

"This guy is a delusional idiot" --Mark Miller

Lazy blogger?
I pull out those quotes not to shirk the hard graft of actually writing this blog, but to point out that Hoagland has really lost his audience. It isn't just me and my fellow skepti-bloggers who see that the Emperor has no clothes, scientifically speaking. I heard all of last night's show, and I do have my own comments. The main topic is comet 67P, the ESA spacecraft Rosetta that rendezvoused with it, and the lander Philae that touched down on it.

First, he was absolutely correct in reporting that the Philae lander is not dead. As soon as comet 67P's orbit brings it into a different orientation with the Sun (and closer to it,) there's a very good chance that the lander's solar panels will get enough energy to wake the spacecraft's systems up again. Hoagland isn't wrong about everything.

He was wrong, however, in saying that 67P has no ice. True, the Rosetta orbiter wasn't able to see any surface ice as it approached, but when the lander attempted to use its MUPUS hammer to probe the surface, it encountered hard ice pretty soon. It looks as though the surface dust is perhaps as much as 20cm thick, overlaying a core that is predominantly ice and gets more porous toward the center of the comet. I refer you (and Hoagland, if he's reading) to the ESA blog posted a month ago, headlined Philae settles in dust-covered ice. There's been a lot of fuss about the HD ratio in 67P's water (that's the deuterium fraction, much higher than Earth water.) At a temperature of -153°C, does anyone think this water could be liquid?

I laughed into my pillow when Hoagland spoke of "artificial gravity machines" inside the comet, and laughed again when he mentioned his buddy in Los Angeles who's an ace at digital image enhancement. This guy, according to Hoagland, has developed a way of removing "the blurring mask that NASA and ESA superimpose on all the space pictures" (not verbatim). Oh dear. Pure paranoia, that one.

A bit later, Hoagland excitedly mentioned that comet 67P is sending out audio signals -- a song, he called it. Here's what he's talking about.  He forgot to mention that, to make this audible, the frequency was artificially raised by a factor of at least 1000. The true frequency of these magnetic oscillations is around 50 millihertz (that's one beat per 20 seconds.) Hoagland is either dishonest or ignorant. Maybe both.

Worthless imagery
The images Hoagland provided to C2C to accompany his interview had no credibility whatsoever. Skyscrapers my ass. Take another look at this one, that Hoagland thinks is a tramway on Mars (he actually means a cable car, like the Sandia tramway in Albuquerque.) 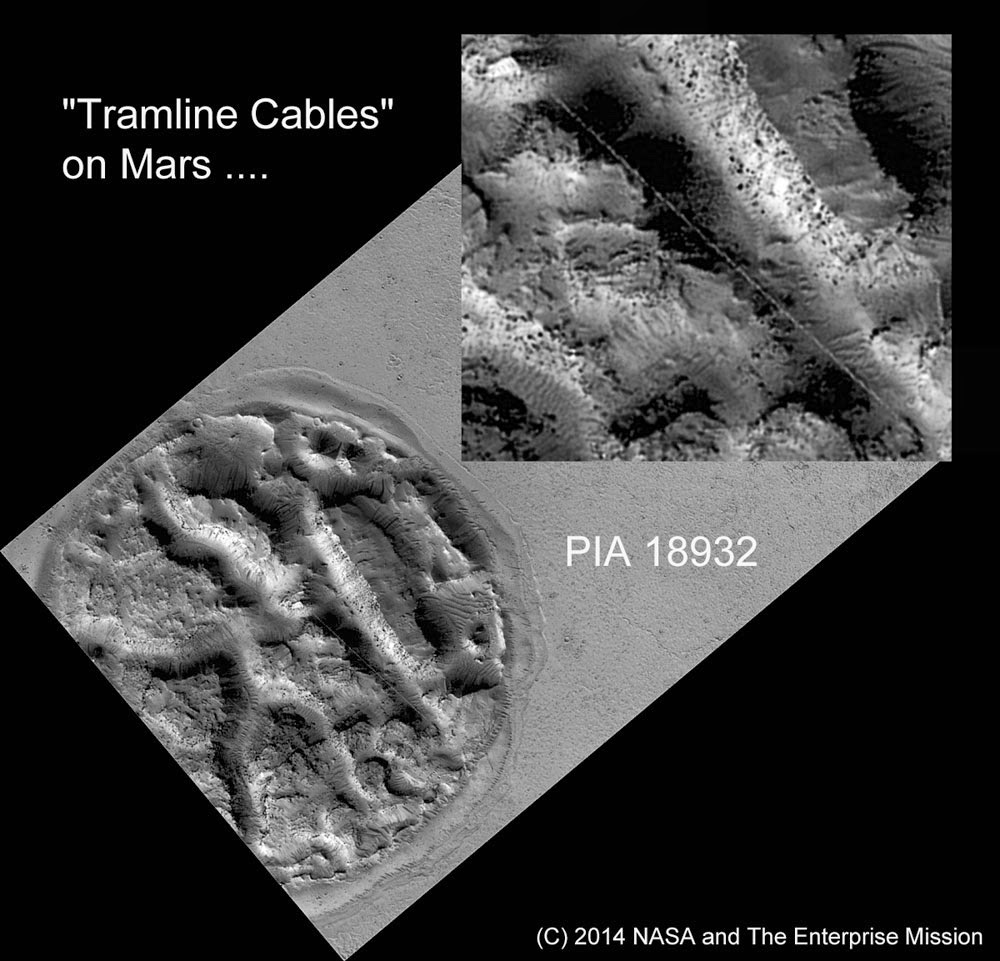 I'm obliged to another commenter -- this time from the Coastgab forum -- for pointing out what the tramline actually is. If you look at the whole strip that this image is part of, it's totally obvious that this is a boundary between two of the CCD elements in the HiRISE instrument.The line extends well outside the feature nicknamed Waffle City.

The commenter was Georgie for President 2216, who also posted "It's a sad day for C2C when Richard C. Hoagland is the biggest draw in months." Thanks, GfP. The bottom line here is that Richard C. Hoagland, the unemployed museum curator, is pig ignorant. When even Farcebook commenters know it's true, it's true.
at 8:39 AM 51 comments:

Why Robert Morningstar didn't get his Time Magazine cover this year 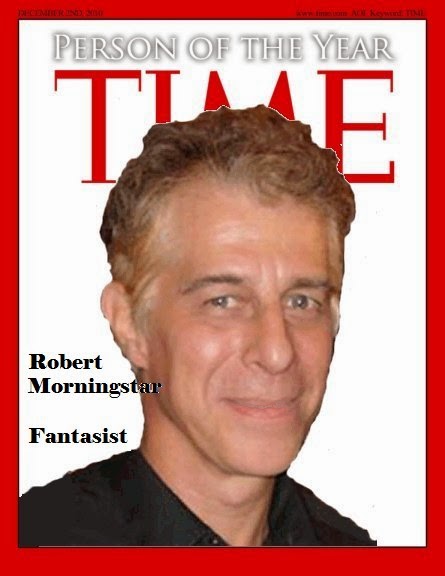 His prediction about the Mars opposition causing major earthquakes was a bust.

He got all seven crater names wrong when labeling a shot of Mare Imbrium.

He made everyone laugh by saying NASA doesn't show images of Ukert crater.

He made everyone laugh even harder by repeating the well-debunked fantasy about a UFO following Apollo 11.

He repeated his atrocious error claiming that the Apollo astronauts were not aware of the tape recorders recording their conversations behind the Moon.

In a Facebook exchange with Don Davis he got the title, the date, and the meaning of the "Brookings Report" wrong.

Better luck next year, AM*

Back in mid-September, expat blogged about Judy Wood's bizarre suggestion that there was so little débris at the World Trade Center site that the contractors had to keep themselves busy by needlessly trucking soil back and forth. I liked this point:

[S]he states that the upper 80%, approximately, of each tower was dustified. It seems to me that if that were the case, the load on the lower ~20% would have been instantly alleviated, and that portion of the towers should have been preserved undamaged. Since that demonstrably did not happen, I think it's a very serious problem for her idea.

I made the same point in a brief post to Wood's FooBoo page. I didn't keep a record of the date or text of it, but it would have been quite soon after expat's bloggery. Well -- today I find this:

This page is for discussing the conclusive body of empirical evidence from 9/11 and for showing our support for Dr. Judy Wood, so off-topic posts, false statements, rumors, theories, spam, and disrespect are not allowed on this page. We must present and discuss the empirical evidence from 9/11 as accurately and precisely as possible, so that others will view this important evidence with serious consideration. This is not a warning, but please still refrain from posting off-topic information, false statements, rumors, theories, spam, and/or disrespect in the future.

Of course, Dr Rodriguez is a long way from refuting the point. He is admitting that the dustification process happened in a fraction of the total time it took each tower to disappear. Therefore, as expat and I say, the load on the "undustified" part of each tower would have been relieved.

I am far from the only victim of Rodriguez's intolerance. He dealt out the exact same treatment (on behalf of Judy Wood, I assume) to the following contributors:

Today's first test flight of the Orion spacecraft, launched by a Delta IV heavy, was a complete success in every respect. Well done, chaps.

Richard Hoagland, guesting on his girlfriend's awful internet radio show, went into hyperbole mode even before the flight was over. "This changes everything," he gushed. "It will save the world." Just as I was thinking his narration of the test flight -- officially designated  EFT-1 -- was reasonably accurate, however, he revealed his ignorance once again by looking forward to the days when Orion will take men to the Moon to rediscover the technology of that ancient Lunar civilization he dreams about. The one destination Orion does not have is the surface of the Moon -- the Augustine Commission plus President Obama (well, his advisers, anyway) nixed that.

Orion is all that we have left of the cancelled Constellation Project, and it will eventually be launched on the all-new Space Launch System toward asteroids and the planet Mars.

I'm just bummed that we'll have to wait until September 2018 for the next Orion flight -- a trip around the Moon and back designated EM-1. Even then, it will not be manned. The manned asteroid rendezvous is projected for 2021-ish. But, you never know -- if the Chinese start doing very visible things with men (and women) on the Moon, the US Congress might have an epiphany.

Update 12/6:
Hoagland took it up a notch by appearing in the news segment of Coast to Coast AM last night. Evidently the slight feud between Hoagland and Noory is over, and we can look forward to more bullshitnote 1. Last night he took most of his allotted time recounting how a 22-year-old  Hoagland attended a NASA press conference in January 1967 and got to ask The Great Von Braun a question. Just as he had earlier on the freedomslips show, he misinformed the audience about Orion's mission, and made the crazy statement that Orion was the technology of the 22nd century. Dear Richard: The 22nd century is 86 years away. Nothing will be left to show for Orion by 2100. I promise you.

Since I'm annoyed that he got back on the air, I'll nit-pick by saying that his reference to the mighty Saturn V rocket was wrong, too. A January 1967 press conference at the Cape would have been about AS-204, later designated Apollo 1 -- the tragic mission that killed Gus Grissom, Ed White and Roger Chaffee in an oxygen firenote 2. The rocket was a Saturn 1B, not a V.

[2] Hoagland himself would, many years later, make the inexcusable claim that the AS-204 fire was no accident, but something contrived by NASA management. His evidence? Astrology.
at 1:37 PM 19 comments: