James Oberg has collected a whole slew of excited UFO reports from French observers, occasioned by the Falcon-9 second stage deorbit burn on 11th November. The orbital path passed over the Pyrenees and the display was visible from much of Western Europe and North Africa. 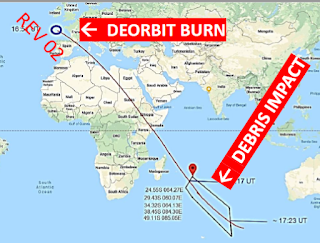 A selection of reports:
« [Y]esterday evening, Monday 11/11/2019 around 17h55, I observed  above the end of
the Ardeche river canyon, between Saint Martin d'Ardèche and Saint Just d'Ardèche . Flying
slowly in a West-East direction, at an indefinite altitude but definitely in our sky, our atmosphere. The "main lighting" in the form of a camembert was noted, the arc of a circle to the front, coming from two sources side by side at the front of the object, and a line or a ray slightly offset towards the 'front’ left. [I had] no time to focus with my poor smartphone, just a photo and a seven-second blurred video, all in maximum optical + digital zoom, too bad. What a surprise...»

« Hello, seen on LSA 38260 at 17:52 too, Flight Radar helping it was Lyon-Ajaccio at sunset. The image does not do justice to the magnificent plume of light generated by the aircraft's headlights on the clouds Yes! You are not accustomed to observe the sky: last night the conditions of light and humidity allowed good observations like these. I saw the phenomenon and cross checked on Flight Radar in RT! What evidence do you have that it was not an airplane? »

« Strange object in the sky that I filmed near Gretz Armainvilliers this Monday 11/11/19 before
18h. I do not know what it was, it looked like a plane with landing lights, but I did not actually see a plane, it made no noise at all. I do not know if it was an aircraft, a drone, a helicopter, a glider, a weather balloon, a cloud of insects, a  meteorological / spatial phenomenon / paranormal or UFO ... We do not know .. No clouds other than the fog that followed the object like a luminous cone.» 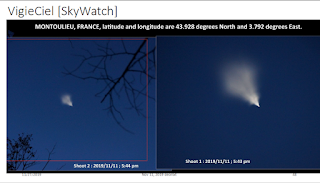 Oberg's comments:
In recent years I’ve collected an amazing range of analogies and metaphors from witnesses trying to relate the appearance of a space rocket plume to some familiar earthly item. Aside from the spirals and spheres and other highly unusual forms, the descriptions of simple exoatmospheric plumes has inspired analogies to headlights, to parachutes, to ice cream cones, but never before this France overflight had I ever heard a witness compare it to a slice of Camembert cheesenote 1. But the French being French, I should not have been surprised. Mais pourquoi pas!?

• Witnesses exhibited standard inability to judge distance
• Witnesses exhibited good ability to describe shape variations
• Stronger than usual delight in imagining it was an alien UFO
• Bizarre coincidence with moderate [5.4 Richter] local earthquake
• Some witnesses accurately noted unusual feature that plume PRECEDED rather than FOLLOWED the object [it WAS a deorbit burn] 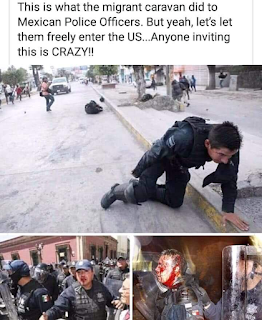 Update: ...and the man who said he had a copy of the "1968 edition" of the Brookings Report. There is no such edition—the final report was issued in 1960. When challenged, Morningstar was unable to come up with any text from his so-called edition that varied in any way from the authentic version.
at 9:12 AM 4 comments:

Mike Bara, the bullshit artist who will say anything you want if you pay him, once said that he's hired an investigator to track me down and that he will soon file a restraining order against me. That was in October 2012 and I'm still waiting for the process server.

At the time, Bara was being interviewed by Brooks Agnew on something called X-Squared radio, which still exists and calls itself  "the #1 talk radio program in America on Sunday nights." Agnew is a strange fellow indeed. Some of his on-line résumé is probably true ("an internationally acclaimed lecturer on energy, manufacturing, and quality improvement"), but Metabunk has outed him as a fake Ph.D., and his ideas about a hollow Earth and time travel make me giggle a bit.

The secret door
What made me think about Agnew recently was the fact that he was one of the guests "behind the secret door" for George Noory on 24th October. I dozed off for some of it but I heard Agnew say that Earth's atmosphere has 60% less xenon than the solar system average. Well, this blog and its readers seem to like xenon as subject matter—my article Yes, folks, it's the xenon isotope show from May 2016 has had 5,418 page views so far, and 48 comments—both figures well above average.

So is Agnew correct? I had to research the question (xenon abundance not being something I discuss on a daily basis) and in fact xenon is even less abundant in the atmosphere than he said. The solar system in general has 18.25 times as much xenon as has Earth's atmosphere. Earth shares its relative lack of Xe with the Sun, and most known comets and asteroids. Wikipedia tells me that the explanation may be that the missing gas is trapped inside quartz.

Agnew seems to think that Xe depletion supports the hollow Earth hypothesis. My opinion is that Agnew's books support the hypothesis that he's a dreamer. It's more likely that Mike Bara will get his restraining order than that time travel will be possible in our lifetimes. 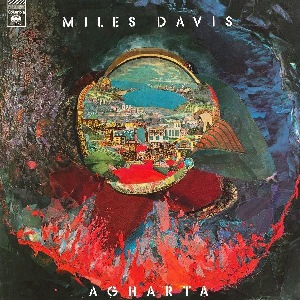