In a comment appended to the April 5, 2011 entry to this blog, I remarked what fun it was to read Mike Bara's rant entitled The Inmates are Running the Asylum. It really is. In this undated essay, Bara emphatically denies the possibility that the anomalies reported on Apollo 10 orbital image AS10-32-4822 could have been caused by a print of this frame being rephotographed by Hoagland while lying under glass at the National Space Science Data Center. Bara is, however, mistaken. This will come as no surprise to regular readers of this blog or, indeed, readers of Mike Bara's literary oeuvre in general.

That Apollo 10 frame is a Hoagland/Bara favorite. At lower left is the choppy terrain that they call "Los Angeles" because they say they see so many rectilinear features that it reminds them of an aerial photograph of LA. It looks nothing like LA to me. On the upper border of that area, in some versions of the image, is the so-called "paperclip" feature that Hoagland has said is a huge antenna. Over to the right, below the spectacular crater Manilius, is the smudge they call "The Castle." Again, only in some versions.

In his online rant, Mike Bara pooh-poohs the claim that reflection off a glass overlay was the source of the so-called anomalies:


This is of course totally wrong and utterly stupid. Hoagland's trip to NSSDC took place on November 14th and 15th, 1994, some six months after he first presented his lunar findings at Ohio State. So, even if there were snapshots taken of pictures at NSSDC... they were certainly not the images presented at Ohio State.

The Ohio State lecture, three hours and twenty minutes long, took place on 2nd June 1994. It is promoted on the Enterprise Mission web site as a pair of VHS tape cassettes costing $39.95. Fortunately, to review it, I didn't have to fork out $40 or retrieve my VHS cassette player from the local landfill. The Ohio State lecture is available on Youtube, and it's worth a look just to see the 1994 version of Richard Hoagland. As self-important and as prolix as he is now, but with a younger look. And no bolo tie.

He spends more than 15 minutes showing his audience around AS10-32-4822. He says more than once that several versions of the frame exist. At 02:33:05 in the video he presents a version obtained at NSSDC and compares it with a version from the Houston archive. So it follows that Mike Bara's timeline must be wrong. Moreover, that flare on the NSSDC version is exactly what one might expect from a glass or plastic overlay.

At 02:25:06 Hoagland tells his audience that the version they are looking at was "one of a set of 16 x 20 prints I got from one of my NASA contacts." Reading the Bara-rant, you would assume that he's referring to Ken Johnston. Bara writes "these images did not come from the visit to NSSDC, but from Ken Johnston's personal collection." However, Johnston and Hoagland did not meet until May 2nd 1995, in Seattle (as is made clear in this transcript.)

So far as I'm concerned, the glass overlay allegation still has the status of "plausible rumor." My point is that, in attempting to quash it in such extravagantly nasty terms, Mike Bara has been wholly unsuccessful.

Funnily enough, at Ohio State RCH didn't mention that paperclip that's on some versions of 4822. To me it looks exactly like a curly fiber that might have intruded during, say, amateur scanning such as must have happened in Hoaglandia. But I wonder at what stage Hoagland "discovered" it. Here's his presentation of it: 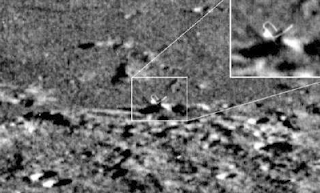 Now here's the same area from the "official" (Houston) version of the image: 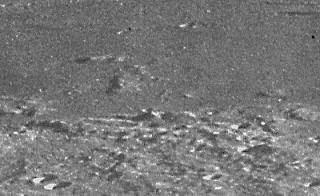 Buddy can you spare a dime?

Times must be hard in Placitas, NM. Robin Falkov (the homeopathist who wrote "Measles does not kill") erupted onto the Hoagland FB page today, pleading for financial support:

Facebook is great, but it would certainly be nice to have some direct support to continue the research. There are limited hours to get things done and cover expenses. For years all the research on Enterprisemission has been published for free. I find it a sad commentary that the more the was given, less was given back by this audience.. Free time is a luxury. You can always support the research of Enterprisemission through Paypal.

May I suggest the following sliding scale of assistance:

That way his income for 2011 would be $20. He scored ZERO web site updates, ZERO correct predictions, and ONE correct statement. He described the MSL landing sequence correctly. He also had the close approach of YU55 right but spoiled it by saying "It'll happen while we're all distracted by Elenin," which was WRONG, as was his further statement that President Obama would be in Hawaii at the time.

$20 ain't much but perhaps he'll try harder this year now that he's broke. Doing something about that horrible web site would be a good start.
at 3:46 PM 60 comments:

Rosie Redfield, who very quickly challenged the announcement that GFAJ-1* could use arsenic as a substitute for phosphorous in its DNA backbone, has now published her research. The result appears to contradict the original work by Felisa Wolfe-Simon et al., but since it's only a blog-post we'll have to wait for peer-reviewed publication for the next chapter of this highly interesting science "Whosynthedit." As Bob Zimmerman correctly reports, it'll be interesting if Science refuses to publish on the grounds that the world of bloggery got the news first.

This blog had some fun with Richard Hoagland's hilarious failure to comprehend the original announcement in December 2010, under the title Tiny bacterium defeats pseudoscientist. It took my breath away when he said "This marks the first time NASA has grappled with the concept 'What is Life?'" It seems that, to him, the entire history of NASA's Mars mission planning since Viking in 1976 just never happened.

James Concannon was awake enough to hear last night's Coast to Coast AM news segment, and reports this:

Richard Hoagland's claims very often amount to shooting an arrow into the side of a barn, then running up and painting a target around it. There cannot be any more blatant example of this than last night's performance.

George Noory reported AvWeek's story that the US Strategic Command has removed links from a web page tracking the final orbit of Phobos-Grunt, which re-entered at 17:45 UTC last Sunday, exactly as expected. He then introduced Hoagland the "science adviser" with the words "I gotta hand it to you Richard, you've been saying for a long time that this is a strange situation." Hoagland smugly replied "Science is nothing if it's not prediction, George" as if this was another brilliant example of his successful analysis. The unexplained action by StratCom allowed Hoagland to claim that the spacecraft had set off on a secret mission to rendezvous with the asteroid YU55.

The truth is 180 degrees from a successful prediction. Hoagland never predicted that StratCom would fudge re-entry data. What he predicted, on November 28th, was that Phobos-Grunt would depart on its secret mission the next day, because the numerology of 11/29/11 was favorable. That prediction was entirely wrong.

On October 21st he said that the rotation period of the asteroid was 19.5 hours. That was wrong. He said it was perfectly spherical. That was wrong too. Richard Hoagland is in no position to claim any success, let alone brilliance, at reporting YU55.


The inexorable logic of celestial mechanics

Now look, if by chance there are any Hoagland disciples reading this, I beseech you in the bowels of Christ to think it possible your guru may be wrong (as somebody once said, more or less.)

In the first place, a spacecraft designed for a sample return from a 22 km moon would be ineffective for examination of a 400m asteroid, and vice versa. Phobos-Grunt could not possibly have been designed for a rendezvous with YU55 without a thousand engineers going "wtf?" or the Russian equivalent.

In the second place, could you please ask your leader why, if some sinister cabal wished to send a spacecraft to say hello to the asteroid, they would allow a close pass within 325,000 km to elapse without taking action, instead waiting until it was half way to Mars before setting out in pursuit?

The producers of Coast to Coast, of course, don't think of these things. George Noory wouldn't care about the truth even if he could discern it. But that doesn't excuse the rest of us from the responsibility to respect the laws of physics.

Yet another unfinished Hoagland project?

We have Sacred  Mysteries to, er... thank (?) for slapping five and a half hours of Hoagland & Bara onto Youtube in 34 parts, under the generic title Never A Straight Answer. What did Youtube do to deserve such punishment, you may well ask. I don't know the answer. Let's face it, poor old Youtube is subjected to daily indignities—some even worse than this rubbish.

This turns out to be a really, really bad video of a presentation our two all-too-fallible authors gave in Los Angeles in November 2007, just after Dark Mission almost made it to the NYT best-seller list ("It can only go up from there," Hoagland said very early in the presentation. Wrong again, Hoagland — it crashed out of the extended list the following week.) The audio is never crisp, the lighting is barbaric, and the camera only very rarely captures the Powerpointery, so most of the time we don't know what's being referred to. Actually, those of us who have subjected ourselves to the experience of reading Dark Mission hardly need the visuals, because the whole thing is very much like a summary of the book.

And indeed, we get treated to all the errors in the book, starting with "NASA is not a civilian agency" (at 02:15 in Part 5) and moving on through Cydonia, the failed Mars missions of the 90s (which James Oberg has expounded upon rather brilliantly,) and the blue blob in the lunar sky which this blog took a fresh look at just last month. But what caught my interest in Part 1 (at 03:00) was a quick insert of two shots from what Hoagland said was a new documentary, hosted by himself and produced by someone he only referred to as "Jay" but is probably Jay Weidner. Hoagland claimed that this documentary would teach us


"...things about Washington, and Lincoln, ...that have never been put on film by anyone in the history of the human species."

Actually, the visuals were pretty good (albeit on video, not film,) showing Hoagland himself at the Lincoln Memorial at dawn, plus a reverse angle looking back toward the Capitol. We didn't hear what RCH was saying, as he walked toward camera with hands in what TV directors call "the fig-leaf position," but it looked promising. 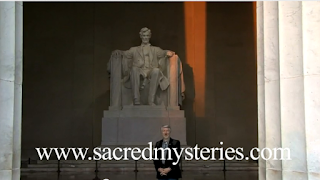 Image credit: sacredmysteries.com
Well, here we are over four years later, and where is this documentary? A search of the catalogs of Sacred Mysteries and Filmbaby comes up empty. Besides, Hoagland has never been shy about promoting anything he has for sale. If it was finished, we'd be hearing about it from him.

So it looks like this is another Hoagland abortion, like the Joshua Tree Conference, Moon With a View, The Bees' Needs, Von Braun's Secret. WHAT IS IT ABOUT HOAGLAND AND HIS ATTENTION SPAN?
at 1:19 PM 41 comments:

Another success for NASA. Another FAIL for Hoagland.

The twin Grail spacecraft are successfully in  lunar orbit, starting their four-month mission to map the Moon's gravity variations.

Richard Hoagland informed the Coast to Coast AM audience of millions that the real purpose of the mission is to locate the Moon's engines. Hoagland is the official SCIENCE ADVISER to that show. Presumably he's paid a consultancy fee.
at 7:17 AM 55 comments: