I really hate to subsidize Kerry Cassidy's nutty ventures in any way, but yesterday as the sun failed to appear I thought "wtf, it's only $5" and paid up for the privilege of getting 156 ghastly minutes of Hoagland in a tiny sub-window with atrocious audio.

This was the Awake & Aware lecture from Glendale last weekend, by all accounts not well attended, so possibly Kerry made a loss on the event, which she had originally planned for the Joshua Tree conference center.

Hoagland sure does love his SciFi, doesn't he? He spent a full 50 minutes just showing us images of famous works of the genre, from H.G. Wells to the latest Dr Who on BBC tv. In honor of the latter, the lectern was dressed up to look like a Tardis -- I kid you not. 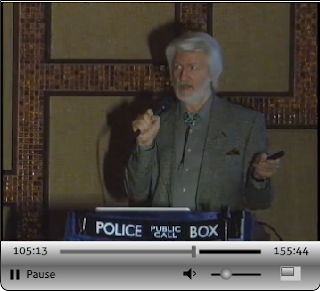 Just to be sure we all understood we were not here witnessing anything resembling science, he threw in a little numerology. I can give you a flavor of that very easily:

The audio wasn't good enough for me to hear whether anyone in the audience shouted "NO RICHARD, IT'S NOT INTERESTING -- IT'S USELESS TRASH!"

Meaningless spikes
Well, finally we got to the Accutron tracesnote 2, which he characterized as "a totally new tool for astrophysics". In a stunning confirmation of my theory that Richard Hoagland is incompetent at mathematics, he told his audience that the frequency of the tuning fork decreases as its inertia increases, in accordance with the Newtonian equation F=manote 3.

He went through his "experiments", starting with the 2004 Venus transit during which he actually had the wrong time for 3rd contact (it was really 07:07:33 EDT, not 07:03:53). He showed Teotihuacan, April 2009, again pretending that the first frequency spike coincided with the moment of dawn although it most assuredly did not (it was 6min 25sec later). He showed the "astounding" frequency excursions he recorded at Tikal, also in April 2009 -- the biggest of all his meaningless spikes even though they were recorded at a time when nothing special was happening astronomically.

I know you're dying to see what he recorded at Chichen Itza last December 19th, before being tossed out by security guards. Hey presto! 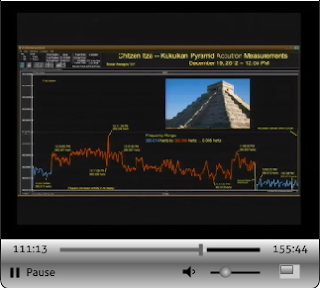 The resolution is way too low to comment  much, except to say that this trace is obviously quite unlike anything he's shown us before. He didn't think that was important enough to explain.

There's an objection to his reasoning on this which I haven't noted as much as I perhaps should have, in past bloggery on the subject. In addition to the fact that he has published no baselines or controls, and that many of his spikes are off-scale, I mean. It is this: He has written that the torsion field increases (and hence frequency decreases) when the tuning fork is parallel to the spin axis of the planet or star creating the field, but the field decreases (and frequency increases) when the fork is orthogonal to the spin axis. And yet he has never, even once, told us what the orientation of the tuning fork was during any of his "experiments."

Last week, in e-mail to me, he told me that I had missed the point of Neil Armstrong's speech at the White House and admonished me to "stick to engineering". Well, I think he should stick to science fiction. Come to think of it, I guess that's what he's doing anyway.

2. For readers new to the Accutron -- I've written about this many times. There's also a good concise explanation here.

3. Quite likely E=mc2 and F=ma are the only two equations Hoagland has ever heard of. Sadly, neither of them is remotely relevant to the frequency of a tuning fork as a function of the properties of its material. The real equation may be found here.

No, Neil Armstrong did not liken himself to a parrot‏

In comments to the previous post here, I metaphorically rolled my eyes at the fact that Richard Hoagland, after all these years, is still repeating the canard that Neil Armstrong likened himself to a parrot in his 25th anniversary speech at the White House.

Hoagland said this during the panel discussion at last weekend's Awake & Aware conference in Glendale. I decided to chide Hoagland in e-mail, and it led to this exchange, which is only informative in that it testifies to how utterly obtuse the man is.


Reminder: What Armstrong actually said was "Wilbur Wright once noted that the only bird that can talk is the parrot, and he doesn't fly very well, so I'll be brief".


EXPAT
I can't believe you trotted out that falsehood yet again at the A&A panel discussion. Armstrong was possibly the greatest pilot in history, and also famously poor at public speaking. You are saying he likened himself to a bird whose talents are THE EXACT OPPOSITE???

Please think before you speak and write.

HOAGLAND
The first responsibility of a real scientist/engineer is to OBSERVE.
Please watch and listen CAREFULLY.

http://www.youtube.com/watch?v=UeQriZqkKIk
Neil Armstrong, at the opening of this famous White House speech, on the 25th Anniversary of the Apollo 11 Landing, DOES directly compare himself to ... a parrot!
The real meaning of this astonishing, personal comparison (given your obvious point -- that Neil was, demonstrably, the unparalled pilot of all time), is equally obvious--
He was (in this, and in all his public speeches re Apollo ...) merely repeating "a carefully-sanctioned script" ... which (as a guy obviously wrestling with his own integrity in all of this) he wanted all Americans to know--Even if he couldn't "tell it straight."

EXPAT
It is YOU who should be watching and listening CAREFULLY. I can't believe you are really this obtuse. He is saying "My talent is for flying, not talking, SO I'LL BE BRIEF". In other words, THE OPPOSITE of a parrot. Dear me, dear me....

HOAGLAND
I hope you're a better engineer than writer!

You really missed the entire point of his remarkable, carefully-chosen opening ....

EXPAT
If, as you claim, he was likening himself to a parrot, WHY WOULD HE SAY "SO I'LL BE BRIEF"???

Parrots are GOOD AT TALKING. Surely you can understand that!!!!!

What is the ONE THING parrots are universally known for?

Because Wilbur Wright did.

Because--
He needed the "parrot/repeating" METAPHOR ... and, quoting Wright deftly deflected the responsibility of choosing THAT metaphor (for thos paying attention) from HIMSELF.

EXPAT
What you write here has no credibility whatsoever. You are totally wrong.

Another open letter to Adrienne Loska

Dear Adrienne,
Happy Easter. Christ is risen, etc. (Dunno if you believe in that stuff, but if you believe there's a one mile square ziggurat on the far side of the Moon, you're definitely the gullible type)

re: Your client Mike Bara, author and so-called aeronautical engineer

Now look, Adrienne dear, this has gone a bit too far. Your client is seriously misinforming his audience. On Dark Matters internet radio, in early March, he reiterated his contention that spinning masses draw in energy from an invisible dimension. As an example, he cited the return trip of Apollo 13 from the Moon. Maintaining trajectory, he explained, required several mid-course corrections, and that was because the CM was powered down and the gyros were not spinning as they normally would be. Hence, you see, an important element of the spacecraft's propulsion was absent. He added:

"I think this was something that Von Braun snuck into the rocket equation back in the 1950s without anyone knowing."

Dr.Derek Eunson, a working design engineer, has written that this statement is "one of the most ludicrous things I have ever heard." He added some very uncomplimentary epithets about your client the author and ersatz engineer—there's no need to repeat them here.

Your client's proposition is wrong in the following five ways:

1] Drawing in energy from "other dimensions" violates the law of conservation of energy. If that law is wrong, it's extremely hard to understand why the physical world has appeared to obey it ever since it was formulated in the 19th century.

2] It is not true that an unusual number of mid-course corrections were needed to bring Apollo 13 home. There was one at MET 105:18:28, about one third of the way home, and another small one at 137:01:48, just prior to CM/SM separation. That is one fewer than the contingency plan stated in the Press Kit, issued prior to launch (see p.42, Transearth coast)

3] Your client the playboy-engineer is evidently under the mistaken impression that energy needs to be applied continuously to a spacecraft during the transit between Earth and Moon (or vice versa). Perhaps he is thinking—erroneously—that the situation is equivalent to that of a car, a train or an aircraft (the latter of which your client claims to have designed, so he's familiar with the idea even though he has written, mistakenly, that the lift generated by an airfoil is not mathematically understood). It is not the case. A spacecraft is set on its journey by a very precisely timed and aimed impulse from its engines, lasting at most a few minutes, and from then on (with the small exception of the mid-course correction) it is under the influence of gravity only. It's perhaps not surprising that your client the error-prone author should get this wrong. His writings over the years have demonstrated his utter ignorance of the nature of both gravitation and orbital mechanics.

4] The equation normally referred to as "the rocket equation" is not the work of Wernher Von Braun, but that of the Russian scientist Konstantin Eduardovich Tsiolkovsky. Here it is, and isn't it a sweetie?

5] It is not possible for anyone—not even Von Braun— to "sneak" terms into a well-known equation without anyone else knowing. Your client the fake engineer reiterated this fiction on Higherside Chats internet radio, and it's a very serious error. While it may be true that transfer orbits are calculated by computer rather than slide-rule now, the algorithms used by those computers are well known to a veritable army of software engineers. Since Von Braun's time two whole generations of rocket scientists have come of age and been trained. Does Mr. Bara think that their instructors would teach equations with "mystery" terms in them?

My plea to you, Adrienne, is that you tell your client to stop this nonsense.

One more thing, Adrienne...
If your client the joke-engineer ever finishes his book Ancient Aliens on Mars, I wish you would persuade him that recruiting his cronies to write meaningless five-star Amazon reviews is unprofessional. I realize that something similar is a fairly normal feature of book promotion these days, but the way it is done is to persuade people to a) actually read the book, and b) write something coherent and persuasive. A little prevarication has come to be accepted, I guess.

There is no better example of your client's extravagant abuse of this tactic than a "review" of The Choice posted on 3rd December last year by one "B. Hopper asdf1239". This person wrote as follows:


Amazon did not accept this as a review, since it fell short of the minimum required length. B. Hopper, a loyal buddy of your client the unintentionally comic author, revised it to say:


That's his "review." Adrienne, I put it to you that this takes unprofessionalism to new heights.