The wisdom of Robert Morningstar

More laughs with Morningstar. Today he posted a 1:42 excerpt of one of his lectures at the Edgar Cayce NYC Center. The audio quality was utterly appalling but after several runs I came up with the following transcript, which I believe is accurate apart from a few minor elisions.


"Remote viewing  [and]  out-of-body experiences  are the natural processes of the human mind, and soul.   Science, over the last 150 years, has... er... suppressed them, and quashed them, and repressed it, and tried to convince us--the public--that if you believe in these faculties you are superstitious. Ahhh... you are... ahhmm..ignorant. And that there's no basis in fact...[?]      Because they believe in a totally materialistic, linear, one-directional time concept of reality. Which is the real falsehood. The idea that life unfolds like a stack of dominoes--just hit one domino and inevitably all the dominoes will fall.   Well, that's not true. Ahhh.. because you're not logical. The universe is not logical.  We now know..[?]...     the last 100 years as well.  The arrival of quantum physics...    relativity...    has shown us that we live simultaneously in a matter-antimatter universe. And the matter universe is the after-effects of the antimatter universe."

Only seven audience members are visible in the Youtubery, but we must assume that many more had paid decent money to hear this. I have a couple of comments, since I know at least as much as AM* about quantum physics--which is to say, not very much.

1. Science has made no efforts that I know of to suppress or quash remote viewing. Indeed, I don't know how it would go about such a project even if it wanted to. Science has simply said "Show me the money." In other and better words, "Let's see some consistent results from RV that are repeatable and clearly better than guesswork." A 1995 evaluationnote 1 by a blue ribbon panel did find a statistically significant RV effect under some conditions, but it cautioned  "It is unclear whether the observed effects can unambiguously be attributed to the paranormal ability of the remote viewers as opposed to characteristics of the judges or of the target or some other characteristic of the methods used." As for the usefulness of RV in formal intelligence gathering, the panel nixed that completely, and as a result the DIA's $20 million Stargate project was shut down.

A follow-up report by Wiseman and Miltonnote 2 found four methodological problems with SAIC's "Experiment One,"  which the 1995 panel had found compelling, and reported that it could not be repeated. Repeatability is, of course, a requirement for scientific acceptance.

More on the anecdotal side, the celebrity remote viewers who have turned up on the radio show Coast to Coast AM over the years have shown how wildly adrift most of this work can be.  Ed Dames can't seem to get anything right (we're still waiting for his "killshot" to wipe out the human race.) Courtney Brown remote viewed an artificial object trailing Comet Hale-Bopp and was indirectly responsible for the suicide of 39 members of the cult group Heaven's Gate. His "artificial object" was never detected.


So I don't think it's at all unreasonable for the science community to reject the claims of RV-- and rejection is not the same thing as suppression. Ray Hyman, in an article in Skeptical Inquirer, put it succinctly:


"What seems clear is that the scientific community is not going to abandon its fundamental ideas about causality, time, and other principles on the basis of a handful of experiments whose findings have yet to be shown to be replicable and lawful."note 3


2. Quantum physics has not shown what Morningstar says it has shown. Its essential usefulness is in explaining three of the four fundamental forces that make everything happen. It also sheds much light on the wave-particle duality of light. It has little or nothing to say about anti-matter.

Parapsychologists have fallen in love with quantum theory because of the phenomenon of entanglement, per which sub-atomic particles that are very far apart can affect each others' states instantaneously. They speak of "consciousness entanglement" as a possible or probable explanation for RV, but there isn't even a whisper of evidence that such a phenomenon exists, let alone has any practical value.

Now what?
Well, speaking of practical value-- what, I wonder, does Morningstar think his lecture audiences are going to do with the information he supplies? Storm the gates of the National Acadamies demanding that science get more lenient with parapsychological claims? Remote-view the lottery numbers? Only if they could actually perform the latter trick would they have got value for their money, I fear.

As we all know, I no longer follow Robert AM* on the book of farces because I can't stand the political hate (which reached a crescendo over the weekend after Hillary Clinton's fall--the anti-Clinton crowd screaming "media cover-up!" despite the fact that it was the lead story in every newscast I saw last night.) However, I do check in on his page now and then, and I was rewarded yesterday not only by the aforementioned example of loony hysteria, but by this:

As a follower called Vernon Cutrere correctly pointed out, there is no character named Horatio in Julius Caesar, neither is there an authentic quote expressing the same thought.

So what--I might even say wtf-- was AM* thinking of? His error headed a link to his favorite and most trusted source of information--the London Daily Mail. In this case it was an article about poverty in the USA. So presumably what he had in his addled mind was "There but for the grace of God go you and I."

Maybe he garbled this quote from Julius Caesar:

"The fault, dear Brutus, is not in our stars,
But in ourselves, that we are underlings."


Or maybe he was thinking of the play that really does have a Horatio in it, Hamlet:

"There are more things in heaven and earth, Horatio,
Than are dreamt of in your philosophy."


Mr. Morningstar, the  "civilian intelligence analyst," should stick to what he's good at--frisbee and chess. Come to think of it, every good chess player I've ever met has been a bit dim at everything else.
at 9:13 AM 18 comments:

David Wilcock gets another 2 hours to misinform and mislead

On Coast-to-Coast AM Tuesday night, David Wilcock wasn't exhibiting very much of that adolescent rage I wrote about in connection with his stint on Other Side of Midnight a month ago. OK, he did at one point say "The cabal folks are using the power of our consciousness against us," but for most of his first hour he was about the sordid business of book marketing. It was pseudo-history rather than pseudo-science--Jason Colavito's territory par excellence. But he strayed into my territory later, when George Noory asked him about the Secret Space Program.

32:45: "We are surrounded by dozens and dozens and dozens of different extraterrestrial civilizations, that not only visit us, but this is their home. And that's a very important point. There is such a need for space--for living space--on the Moon that the back side of the Moon is just developed out as much as you can handle. There's no space left that hasn't been settled--and apparently, according to some insiders we have coming out of the Russian side of thingsnote 1, it's so busy on the night side of the Moon right now that it looks like Manhattan at night. It's just totally loaded with light, because there's so many different groups there."

So yet again we have a fantasist with no actual knowledge of space science or astronomy telling us fairy stories about the Moon without making any reference to the ultra high definition imagery available online from Lunar Reconnaissance Orbiter. Just take a look around those images and you'll quickly see that what Wilcock was telling us is

To make matters very much worse, Wilcock had the nerve to actually pretend he had done legitimate photo-research.


35:12: "As much as possible I'm bringing in the evidence, I'm bringing in photographic proof --such as what's called the Blair Cuspids, a group of obelisks that were photographed on the Moon. You can see the shadows coming off of 'em, they're clearly obelisks. And there's these rectangular pits in the ground around where they are. And those rectangles would represent rectangular ruins under the surface, that meteors hitting the Moon causing craters have smashed in the roofs, because they're so old that they're kind-of falling apart."

Well, we've met the Blair Cuspids before, in the context of Ancient Aliens and my bloggery at that time. Here's the image both AA and Wilcock are relying on: 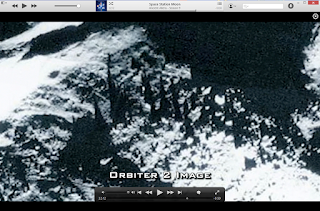 So here's this buffoon, claiming to be a bona fide researcher ("a professional intuitive consultant," in his C2C profile, ha-ha) but relying on an image taken in 1966 with a resolution of a couple of meters. The original complete frame shows the scale of these shadows: they are not towering obelisks but smallish rock formations at a very low sun angle (look at top right of image h2.) "Trekker," a regular reader and commenter here, found the site at 5.0252°N, 15.583°E. Here they are, at double the resolution of the 1966 shot and a much higher sun angle: 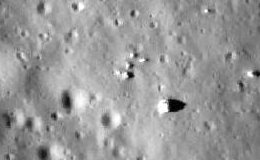 What David Wilcock told his audience on Tuesday night is

What a week for George Noory! Glynis McCants, David Icke, and this. I thought about blogging Icke but I don't think my blood pressure could stand another self-important nincompoop.