Report on what Richard Hoagland has described as his "new book"

During Richard Hoagland's"interview" last Friday night with Coast-to-Coast host Richard Syrett, I lost count of the number of times he plugged what he called "my new book", Pluto: New Horizons for a Lost Horizon. (I place "interview" in quotes because Hoagland's obnoxious arrogance was front and center, as he talked over Syrett and basically attempted to take over the whole show.note 1)

Well, I don't usually blame C2C guests for plugging books—they get no other compensation for giving up most of a night's sleep (and by the way, it really works, as I have reported passim.) But in this case the plugging was strident and the problem is that IT'S NOT HOAGLAND'S BOOK. It's Richard Grossinger's book. Grossinger was the original publisher of The Monuments of Mars after Simon & Shuster reverted Hoagland's contract for non-performance. Grossinger wrote at some length about his pal Hoagland in 2010. Here's an excerpt:


"Hoagland is a unique mixture of amateur scientist, genius inventor, scam artist, and performer, blending true, legitimate speculative science with his own extrapolations, tall tales, and inflations. He is a brilliant and glorious myth-maker and a evidence-based scientist at the same time."

New Horizons for a procrastinating author
The book is 300 pages long and contains 31 essays by a smörgåsbord of writers. None of the names ring a bell with me except Jason Martell and Grossinger himself, who contributes #2 in addition to a 44-page introduction (which is quite well-written, in fact.) Hoagland himself is #3 up, strutting around the book for 64 pages. His chapter title is New Horizon ... for a Lost Horizon, and it's recognizably Hoagland but ever so slightly toned down. We get lots of "extraordinary," "astonishing" and "stunning." There are the unmotivated italics and the bizarre ellipses, but no all-caps overemphasis and no exclamation points. Deo gratias.

Well, here's a flavor of the sheer mendacity of this material, as Hoagland tries to substantiate his thesis that the solar system is replete with evidence of a now-dead advanced civilization:

"Our research has now revealed that this stunning, new solar system reality first became known to the U.S. Department of Defense under the Eisenhower administration in the 1950s—in part via a pioneering, top-secret JPL (U.S. Army) effort at a first unmanned circumlunar reconnaissance mission, "Project Red Socks." We believe the shocking results of this clandestine mission formed the real reason behind NASA's sudden public emergence after Sputnik, and the rapid congressional authorization, only one year later in 1958, of NASA as the loudly-proclaimed, lead "civilian space agency of the U.S.A."

"This was the perfect cover—in the 1950s world of perpetual Soviet pursuit of any and all technological supremacy over the West—for NASA's real, long-term covert mission:
To secretly ascertain ... from NASA's inception ... the full extent of (potential) military threats (or benefits) of these long-abandoned, ancient ET derelicts ... as well as those ancient surface installations still partially preserved on various planets and moons (Cydonia et al.); the surviving riches of an entire, astonishing Type II Civilization in our own backyard—whose extraordinary legacy and scientific potential was only fully accepted (even within NASA) when Apollo astronauts fulfilled their real Kennedy Mission and clandestinely returned, beginning in 1969, unquestionable intelligently-designed and manufactured ET artifacts to Earth—from the Moon."note2

He writes of "the shocking results" of Project Red Socks. The most shocking result was that the project never happened. It was way too ambitious for a group of people who would not even succeed in orbiting a tiny 14kg satellite for another three months. Red Socks was a panic reaction to the Soviet success with Sputnik 1, conceived as a series of nine lunar orbiters which would, at a minimum, return photographs of the far side. It was even suggested that they might deliver a nuclear weapon to the surface, then wait patiently for some of the debris to come flying back to Earth by sheer good luck (I almost added an exclamation point there, tsk tsk.) Some vestiges of Red Socks were folded into the Pioneer 4 mission in 1959, but basically, it was a non-starter.

As for that utterly daft allegation that Apollo returned the technical artifacts of a lunar civilization—he made the same claim in the introduction to Dark Mission. He did not then, and does not now, produce one scintilla of evidence for that assertion. On the contrary, the evidence is all against him. We know what was brought back from the Moon. It was meticulously catalogued in the Lunar Receiving Laboratory, where Hoagland's pal Ken Johnston worked. Surely Ken could set the Hoaxster straight on that. It's all very well him saying "Ah well, that's what they want you to think"—without some evidence, he just looks like a buffoon. In Dark Mission he further alleged that the lunar goodies were then subjected to reverse engineering. Well, where are the results, Richard?

Update 10th April:
Oy veh, Coast to Coast saw fit to give Hoagland yet another two hours last night to mention "my book" a dozen times. He talked at some length about private enterprise Moon landings, then added:


"Another reason to buy the book is that part of the proceeds will go toward funding this enterprise."

FACEPALM. There are 31 authors to pay. After publishing costs the book might generate as much as $50,000—probably less. How much use does Hoagland think the residuals would be to a manned lunar landing mission? 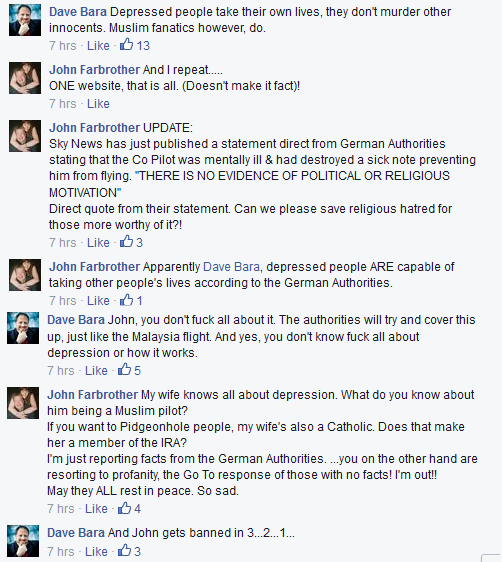 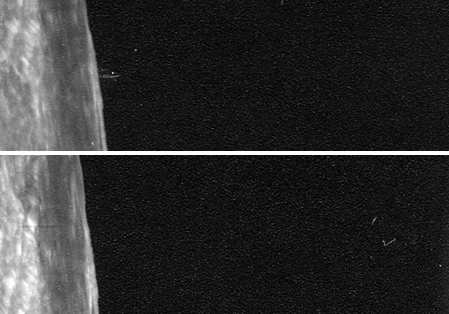 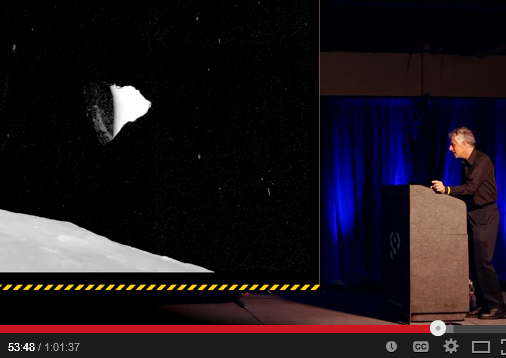 Update 2: I calculated, based on the known fact that the Hasselblad camera had an 80mm lens and a 70mm square frame, that the "space station" would have to have been 2,338 miles away to appear that size, assuming it is 166 miles high.
at 3:10 PM 10 comments:

Yesterday NASA put out a news release announcing that Mars once had more water than Earth’s Arctic Ocean. Mike Bara immediately blogged that of course he and Hoagland published this back in 2001. He wrote, in his usual ungrammatical style:


"I'm gratified that NASA has finally admitted that Hoagland and me were correct all those years ago."

Stuart Robbins points out that a search of the literature reveals prior work on this going back to 1988. Robbins covers this so well that he's saved me the effort of writing today.

The only thing I would add is the hilarious fact that the 2001 "paper" by Hoagland & Bara is the one that looks like this in Firefox and Chrome: 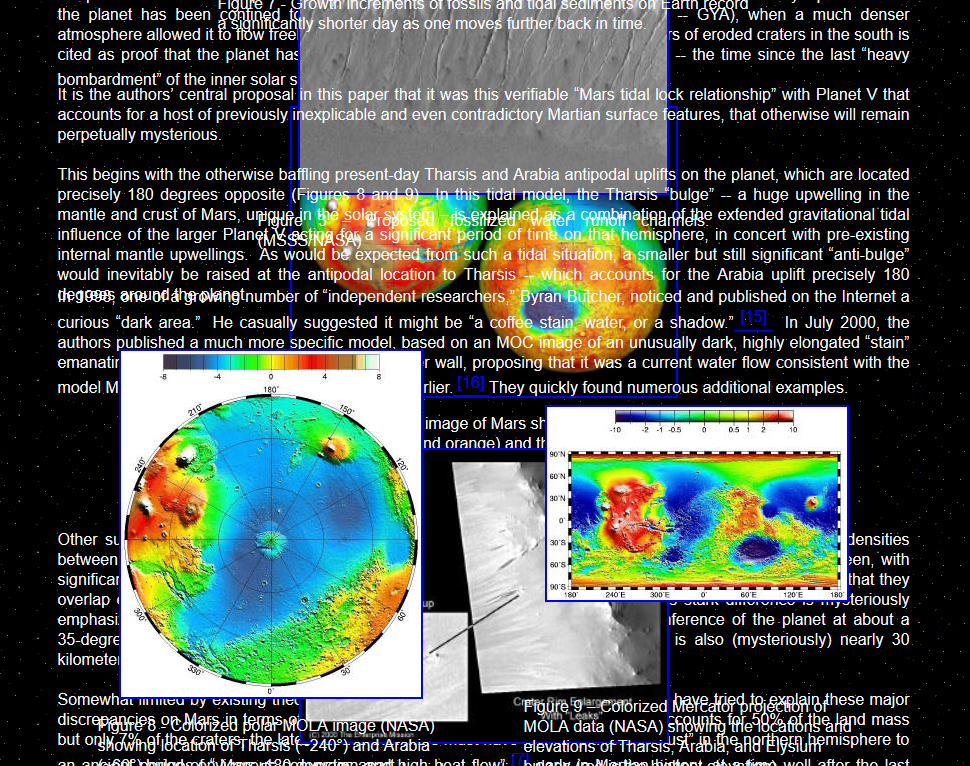 They've now made a pdf version, dressed up to look like a real science paper, identifying Bara as "Executive Director, Formal Action Committee on Extraterrestrial Studies."