Robert Morningstar does something disgusting

Robert Morningstar, a self-described "civilian intelligence analyst," has made many errors in reporting what he thinks are facts, as this blog has pointed out here, here, and here (I could go on.) Two days ago he excelled every previous outlier in both mis-reporting and bad taste.

Morningstar is a propagandist for the ultra-right in US politics, and also for the rising resistance against the spread of Islam. On 26 January he posted this on Facebook:


"Islam is certainly NOT a "religion of peace" as Obama professes and pontificates. Islam is a religion of pieces of human beings, left scattered, with many other victims maimed across the world in the Name of Allah, the merciless and despicable, a demonic deity who demands and condones subhuman barbarity and depravity such as this."

Immediately underneath this text was a picture which I am not going to reproduce, but I'll describe it. It shows a decapitated young woman in stark, horrific detail. She's dressed in a black bra and figure-hugging denim trousers. Her severed head lies about a foot from her body, and she is lying in a lake of blood. There also appears to be a stab wound in her chest.

Barbarity and depravity indeed. The problem with this as anti-Islamic propaganda is that it has nothing to do with Islam. The victim is Patricia Pereira da Silva, a Brazilian who was killed by her jealous boyfriend, Renato Guilherme Silva, after he caught her posting photos to another man on WhatsApp. It happened last Spring in the State of Pernambuco, in a village called Angelito Agreste.

What can be said about a man who would use such a revolting picture so dishonestly? His own words "despicable" and "depravity" are pretty good for a start. I suggest that this outrage has stripped everything he has ever said and written, plus everything he will ever say and write in future, of any credibility.
at 9:18 AM 6 comments: 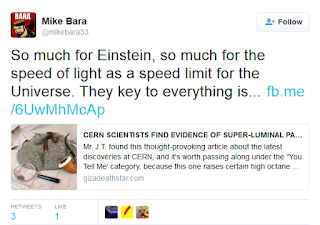 That was Mike Bara the world-famous theoretical physicist, tweeting yesterday complete with the usual keyboard error (the end of the sentence is "....rotation.") The brain error involved is not so easy to spot, but it's predictable to those of us who know Bara's habits. He's so keen to snipe at physics that he'll grab anything that looks like ammunition without considering it, checking it, or discussing it. In this case --as in the past-- he's made a total slobbering idiot of himself.

The link is to an edition of Giza Death Star, the webblog of Dr Joseph Farrell. Farrell is treated like a guru by the woo community because he has what they like to call "an open mind"note 1 and he also has academic credentials (unlike, say, Bara, Hoagland, Morton, Cassidy et al.) His doctorate, however, is in patristicsnote 2 which is more like religion than physics. Anyway, here's a screen capture of the start of Farrell's piece: 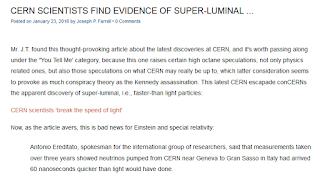 Why am I showing a screencap instead of linking to the article? Farrell has taken it down, that's why. And why has the professor of religious writings taken it down, I hear you ask. BECAUSE IT'S BOLLOCKS, that's why, and even Farrell came to realize that. The link is to this article in the London Daily Telegraph.note 3 See the date? 22nd September 2011. This is just the old story of the neutrinos that seemed to exceed the speed of light until the technicians checked the optical fiber connections and found one of them to be faulty.

Oh dear, there really is egg on some faces today, and I don't think Einstein's is one of them.

Update:
Somebody in Facebookistan pointed out that this was old news, and Bara dug himself further into the merde by revealing his ignorance in more depth:

Thanks to Chris Lawrence and Stuart Robbins for help with this post.

Anyone with a smidgen of interest in astronomy cannot have missed the recent announcement by Konstantin Batygin and Mike Brown of Caltech, of a purely theoretical Neptune-sized planet in a highly eccentric 15,000-year orbit stretching way beyond the Kuiper Belt. Here's the article by Eric Hand in Science, and here's the diagram sketching the six Kuiper-belt objects whose orbits cluster in a way that Batygin and Brown say needs explaining.

It's very important to understand that "planet nine" has not actually been observed, and may never be. Claims for a Planet X have a long and erratic history.note 1 However, I admit that it is possible that the WISE survey could have missed such an object -- theoretically, WISE could have detected a Jupiter-sized planet up to a light-year from the Sun or a Saturn-sized object out to 10,000 AU, but if P9 is at or near the outer reach of its orbit, it could just possibly have slipped by.

Mike Bara's blog today, predictably, is one long self-congratulatory TOLDYA. Here's the meat of it:


"In my second book The Choice from New Page Books, I made a series of predictions that I stated would validate or invalidate the basic thesis in the book. Foremost among them was the specific prediction that in the years after it's publication, one or possibly two gas-giant planets would be found far beyond the orbit of Pluto .... [Brown and Batygin] estimate the planet has an orbital period of between 10 and 20 thousand years. In The Choice I placed it at 13,000 years and 550 AU, or 50 billion miles."

That passage has only a modicum of truthiness. The basic thesis of the book is "Using conscious thought and physics of the mind to reshape the world." The possible existence of P9 has nothing to do with that somewhat sophomoric idea, I suggest.

It's true that Bara did discuss undiscovered outer planets, on pp. 176-183. However, it's not his theory. It's Richard Hoagland's theory, recycled from the book they wrote together, Dark Mission. Moreover, the object that he calls Nemesis and describes as 550 AU out in a 13,000-year orbit (p. 181) is not a planet at all, but a hypothetical brown dwarf forming a loose binary with the Sun. Bara makes this even more entertaining by suggesting that gravitational attraction is too weak to keep Nemesis and the Sun in partnership, but of course "there is no reason to think that the same unseen force (torsion) that holds everything together isn't also keeping this object linked to our Sun." Oh brilliant -- a former CAD-CAM technician with no training in physics sweeps aside the entire basis of planetary astronomy just like that.

The brown dwarf pseudo-object was originally dreamed up to account for the so-called "Pioneer anomaly" -- an (at the time) unexplained deviation from the nominal trajectory of the two Pioneer spacecraft as they departed the known solar system. Mike Bara doesn't pay enough attention to understand that the so-called anomaly has now been explained by anisotropic radiationnote 2, and the need for a brown dwarf has vanished.

Mike Bara, perhaps, should read his own text more diligently before doing the toldya dance.

This template seems pleasant and readable. My sub-head styles seem OK, too.
at 8:15 AM 13 comments: