Picard is a 23-km diameter crater in Mare Crisium (Sea of Crises) on the Moon. Writing Ancient Aliens on the Moon, college drop-out Mike Bara considered Mare Crisium so important that he devoted the whole of Chapter 5 to it.

Mare Crisium has been the site of numerous historical reports of TLP (transient lunar phenomena), and also the sensational (and utterly mistaken) 1953 report by journalist John O'Neill of an artificial bridge over part of the mare1,2. It's also the site of the so-called "spire," which may well be yet another scanner fault. It certainly isn't, as both Bara and Hoagland have written, part of a box several miles high. Even those satellite dishes, that I blogged about on October 12th, are right around here. 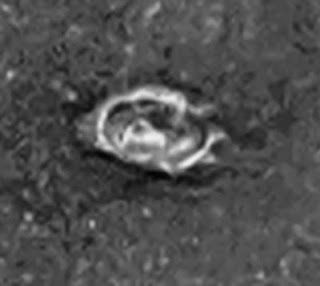 This unmistakable pie-slice shaped structure glows in the sunlight, illuminating what must be the last remaining piece of a solid, watch-crystal like dome over the  crater itself.Under intense enhancement, the wedge-shaped piece is even more obvious. (emphasis added)


That "what must be" is a strong contender for "most unscientific statement written this century." As with the satellite dishes, it's a profound mystery why Mike Bara chose this extremely poor image of Picard, when an image at approximately 0.8m resolution is so easily available from Lunar Reconnaissance Orbiter (14.6°N, 54.7°E). Here it is: 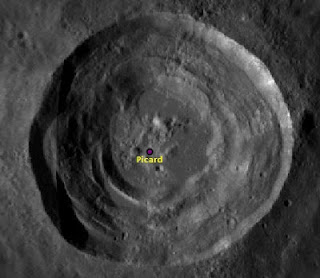 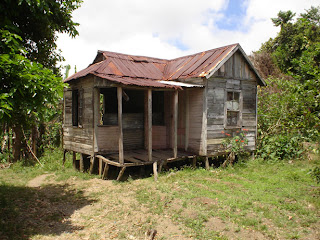 It might have been Adrienne Loska (Mike's manager), I wasn't sure about that. Fortunately I saw her coming and yelled "Go away you douchebag! There's no Expat here!!" I put on my famous Boston accent, too. Phew, a narrow escape...
at 9:34 AM 21 comments:

Drama in the courtroom 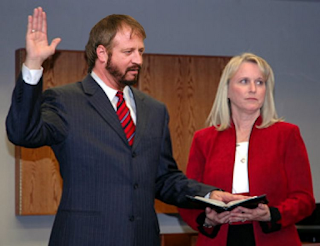 This photo came my way today, allegedly taken in a Seattle courtroom where Mike Bara was about to testify that he is indeed in fear for his physical safety and that of his children, because of the insistence of "expat" that he has been publishing factual errors.

I can't vouch for the picture's authenticity -- it may even be photoshopped. You know how these things get around the net these days. Something similar happened to a certain ziggurat on the far side of the Moon, I seem to recall.
at 10:47 AM 7 comments:

That's the headline Mike Bara would love to see appear here one day. On his latest internet radio show, X-Squared with Brooks Agnew, (Parts 2&3 only) he said that he's hired an investigator to track me down and he will soon file a restraining order against me.

Where's he going to find a judge to sign an order that's in flagrant conflict with the First Amendment to the Constitution, I wonder?

To a caller who asked why he accuses his critics of homosexuality, Bara replied "in your case it's probably true", then later said he wished the critics would stick to the facts and not get so personal.

Internet radio shows just don't know when to stop, it seems. Mike Bara was on yet another last night—listen to it if you must, and if you have 100 minutes to spare. I reviewed it and didn't hear anything new except that in the last three months the attacks on him and his "work" have been "intense, dirty, and underhanded." I'd say the dirt has been flying in the other direction.

The next interminable internet radio show is tonight (Sunday morning, technically) on Paracast, featuring me droning on about the errors in the writings of Hoagland & Bara for two solid hours minus commercial breaks.

Time is midnight PDT, 3am EDT, 8am BST. The good news is that you don't have to either lose sleep or spoil your Sunday breakfast. The podcast will be up on the Paracast site for the next week. The high points for me were my extended rebuttals of "Von Braun's Secret" and NASA's Egyptian God worship. But there's nothing that hasn't been on this blog before, so regular and attentive readers can skip it.
at 9:27 AM 39 comments: 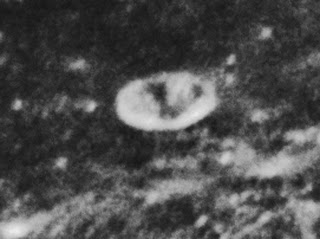 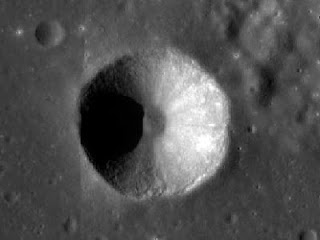 The "spar" on East Massif: Mike Bara makes a right Charlie of himself

Here's a long excerpt from pp. 160-165 of Ancient Aliens on the Moon. It's from Chapter 7, which is all about the Apollo 17 mission to Taurus-Littrow.

"At first, AS17-134-20391doesn't seem very interesting or controversial. A hand-held Hasselblad shot taken by astronaut Gene Cernan, it shows the view out of the moving Lunar Rover as the astronauts made their way to geology station 1. The mountains in the background are Bear Mountain and part of the East Massif. Again, this all appears fairly unremarkable until you zoom up close onto the base of the East Massif and see... condos. 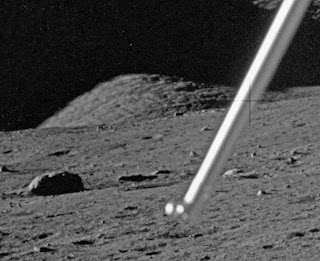 Further proof in support of this model (and the lunar dome model) came in the form of images scanned and downloaded from an Italian web site (since extinct) that displayed high resolution scans of photos taken on EVA-1 at around the same time and location. Apparently procured from European versions of early generation NASA negatives, these photos painted a completely different picture of the Taurus-Littrow valley than the one NASA has sought to advance for years.

Taken by Jack Schmitt a few minutes after Cernan's earlier photo of the East Massif and Mons Vitruvius, ... Schmitt's photo AS17-136-20767 also shows something else; a piece of semi-transparent spar-like glass structure which has sagged and collapsed over the mountain. 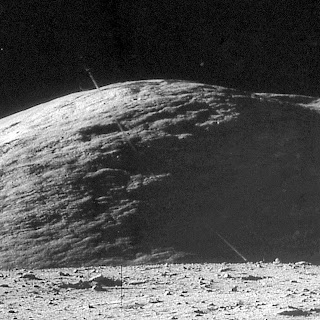 
I must make it very clear here, this obviously structural spar does not appear currently on any NASA versions of this frame. It appears only on the Italian version apparently procured from a European scientific archive. Because of this, some people have sought to downplay it as a scratch on the print or negative, but this can be discounted by several observations. First, if you notice the spar follows the geometry of the light on the Moon that day; brighter and more reflective in the areas where there is ample sunlight and nearly invisible in the darker shadowed areas of the photo. It also follows the contours of the East Massif itself and seems to be anchored to the ground by a thin connecting wire. "Scratches" simply do not follow the contours of terrain or the geometry of the lighting in a photograph. If it was a scratch and not actually on the surface of the Moon, it would be the same brightness along its entire length.

There is also the question of the photo itself, which is of much higher quality than many NASA scans available today. This is because most of the photos on official NASA sites are copies of copies of copies, many generations removed from the originals. These Italian images appear to be more akin to Ken Johnston's first generation prints in quality and detail. This makes the "scratch" explanation even more unlikely."

I'll leave you to figure out what exactly "the geometry of the light" means. It seems to me that there's more than adequate sunlight to illuminate the whole of a spar, if it existed. Anyway, I decided to investigate, and discovered that, although the Italian web site seems moribund, it is not actually extinct. If you google the string 'AS17-136-20767' and ask Mr. Google to show you only Italian hits, you get led here and here.

Mike Bara's contention that this image is of superior quality to the "official" NASA versions of the shot is immediately belied. IT IS NOT TRUE that the NASA imagery is "copies of copies of copies, many generations removed from the originals." The historians who compiled the Apollo image libraries had access to very early generation material. In fact,  The official Apollo 17 image library offers this image in two sizes: 248K and high-res 1217K. Check 'em out--if they are inferior to the Italian image I'll never eat penne all'arrabbiata again.

A little more digging produced the name of the Italian astronomer who made that long list of "anomalous" Apollo imagery. His name is Davide De Martin, and he's a good-looking guy who actually works professionally as an image processor for the European Hubble office. I contacted Signor De Martin. I wanted to know whether he also had on file the images "on either side" of AS17-136-20767--namely, AS17-136-20766 and AS17-136-20768. Since the set was part of a left-to-right panning sequence, the same part of East Massif was captured in those frames and so, obviously, the "spar" would appear in those too, if it was real. De Martin graciously replied as follows:

"That's not a spar, obviously, but just an artifact likely due to the scanning process or whatever. No trace of the artifact in 20766 and 20768 which show the same hill." 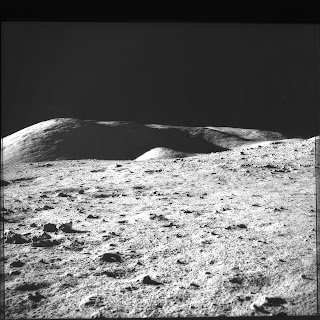 So once again Mike Bara has given his fans totally false information. The "obviously structural spar" is in fact an "obvious scanning error." Will he ever apologize? I really doubt it.

Update:
Chris, a regular reader of this blog, now claims to have incontrovertible photographic evidence that there really is a spar at Taurus-Littrow. 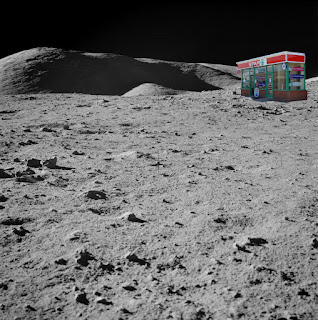