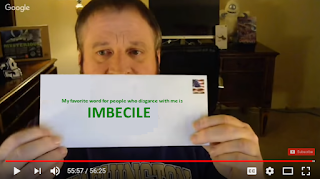 Of course he didn't really hold up that sign during his recent Tell The Truth Wednesday vlog—that's just an internet fake, I can't think where it came from. What he did hold up was an envelope containing two free tix to Alien Snowfest, a prize he was offering to one of his fans. The interesting part is that the lucky prizewinner got to see her name and full street address plastered across YouTube thanks to Bara. The address was entirely readable.
at 8:21 AM

For someone so into coverups he certainly missed that one!

How about this? Anyone got better info?

He's getting on in years, isn't he? LOL!

What Mike "Cartman" Bara actually means is
"Lick my chocolate salty balls" from the famous song by his handler "the Chef" :-) :-)

He never really gets it right does he :-)

Yeah. I bet he says the same about me.

I skimmed through last night's "Talk a load of bollocks Wednesday", which this week was on Monday because Mike's important and has places to be and people to see. There were a couple of absolute corkers.

On global warming: "... the temperature of the planet is exactly the same as it was, and even if it was slightly higher, that's a good thing, we have more carbon dioxide because it's plant food".

At the end someone asked him "What's your take on all that hubbub with the Solar Observatory shutting down?". Mike replied, "I didn't see anything about that. I might have to go look that up and talk about it next week. So... I didn't know that we shut down the Solar Observatory, are you talking about the one that observes the Sun?"

This blog has previously covered the shutdown (and Hoagland's bizarre response to it).

Mike also bumbled on about our solar system moving through a void in a cloud of charged electrons and this is causing the Sun to be less active with no sunspots, and our planet to cool down, with a possible ice age around the corner. Stuart Robbins - any idea what he's clumsily trying to say?

"any idea what he's clumsily trying to say?"

There is some indication in a shift in cosmic ray intensity, possibly due to reduced sunspot activity causing [or being caused by] a weaker solar magnetic field, which normally deflects some of the cosmic ray flux away from the inner planets. The postulated climate effect is that cosmic rays partially ionize the upper atmosphere, and the ions act as condensation nuclei for high altitude clouds, which slightly alters the Earth's albedo and hence the amount of solar heat reaching the surface -- the more cosmic rays, the higher Earth's albedo, affecting to some degree solar heat reaching the troposphere and surface. There's some reasonable science behind the postulated causal chain but the scale hasn't been measured AFAIK.

Thanks, JimO, and also for the comment on the Von Karman region of the Moon.

Thanks, I found more info too based on the image Bara had up. It's a 2013 article on NASA's site called Eleven Spacecraft Show Interstellar Wind Changed Direction Over 40 Years. The rubbish Bara was coming out with while he talked over that image bears no relation to it.