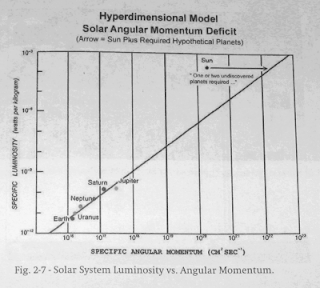 For what it's worth, many of us were very skeptical of the "Planet 9" stuff by the CalTech folks. For several (real science) reasons.

To some of us, it would be planet 10 if it existed. Pluto is still a planet and Han shot first! ;)

Not sure which him you refer to here:

" According to him, the solar system as a whole has less angular momentum than it should, "

but I don't know why the Solar System "should" have more angular momentum than it does. On what basis? Compared with what? I haven't read any of the relevant material, but I'm wondering if you can enlighten us, please?

Basically, what that means in my simple understanding is that it "should" all be spinning faster than it is, but that would change everything, surely? All planetary orbits would be larger, and Earth might then be outside the Habitable Zone so I don't see where they are coming from. Do you? Can you throw any light on the reasoning - or unreasoning, as the case may more likely be?

Or, are they trying to suggest that the sun is spinning too fast compared to the planets, or what the heck? How so, if so? Any fascinating pearls of wisdom for us?

Look at the diagraam. Since five planets (plus their moons) fall roughly on a straight line, he speculates that there is some underlying law of physics accounting for that. However, projecting upwards towards the specific angular momentum (and luminosity) of the solar system as a whole, it does not adhere to this imagined law. He is saying that if there are undiscovered outer planets, perhaps the SS would hit that line.

Yes, it's extremely dodgy reasoning and I really do not think Hoagland understands that these figures are per unit mass.

Hoagland doesn't need to fully understand a particular scientific concept as long as he understands it better than his audience. So he can conceivably no nothing at all about what he's talking about and still make the sale if his audience is even more ignorant. That's been his business plan since the 1980's anyway.

Thanks for that. Clearer now. I agree:

"Yes, it's extremely dodgy reasoning and I really do not think Hoagland understands that these figures are per unit mass. "

Who cares about the per unit mass issue? Not Hoagie, obviously. But that makes it all the more interesting.

Actually, it's damn interesting (ignoring the luminosity for now at least).

The most interesting point is the fact that the planets listed (not to mention the few that have been omitted, no doubt because they don't fall near the line at all) do actually appear to fall near that line, Oh... ignoring the Sun of course, which is by far the major player and should by rights be the first one through which the line passes. But that would be just 'inconvenient'.

It's ridiculous to suggest the line should not include the Sun, and the fact that the Sun is off that arbitrary line shows how idiotic the proposer is.

In addition, all the planets listed, except Earth, are giant, outer ('gas') planets, so really Earth is the odd man out, in every respect. I'd love to see where Mercury, Venus & Mars (and Pluto) would fall on that graph.

Simply, it appears the data has been cherry-picked to try to imply some "great discovery" where there truly isn't one. If the line was drawn correctly, Jupiter (and Saturn) would be off the line, and he should be raving about that instead.

In setting this pseudoscience up, did Hoaxland invoke his HyperDimensional Handwaving Numerology? Tell me he did, I'd be heartbroken if he hadn't invoked his pet "arctangent of pi over whatever" voodoo!

Hoagland should have considered that extrapolating from a small subset of planets does not always work. See Bode's Law.

Nonsense comment from Theadora disallowed. Yes, dear, I'm "censoring" you and I will every time you invoke astrology.

Why do Ice Ages only occur when Earth is at an apex of the elliptical path of Precession, if they occur and why is that the location and time when Earth is most frequently impacted by bollides?

I think the Milankovitch cycle(s) is/are (part of) the answer to part (a) of your question. Increased axial tilt causes reduced temperatures, I think due to increased reflection by the polar ice caps but I'm not certain.

I did a little research on this Angular Momentum fantabulation.

According to various sources, the Sun accounts for less than 4% of the total angular momentum of the Solar System (as Rotational A.M., naturally), so its S.A.M. must be relatively insignificant, making that graph completely up the creek. Jupiter has the bulk (60% of the O.A.M., I read), and the other giants, by virtue of their sizes and distance, must hold most of the the remainder.

from which Excel calculated the following Orbital S.A.M. values (also in cm2/s):

I haven't bothered with their Rotational S.A.M. values as they are orders of magnitude less in each case. (Not to mention problematic, with multi-phase planets.) Most notably, and not so unexpectedly, all the gas giants have increasing Orbital S.A.M. values with distance from the sun, contrary to what is depicted in 'that' graph. Perhaps more surprising, ALL the planets (inc. Pluto) fit the same pattern.

I also haven't bothered graphing these results, but someone else may like to.

Unless Hoagie is somehow calculating the entire SS's angular momentum as it orbits the centre of the galaxy, I dunno what he's talking about. But I guess, nor does he.

Thanks for the research, 2%, it's useful. I wasn't aware that orbital was so much greater than rotational.

There's a point you are missing, however. The graph constructed by The New Solar System calculates rotational AM inclusive of any satellites. In the case of the Sun, the satellites are the planets.

Figure 20. An early temperature record of the last major glaciations, after Dansgaard and
his colleagues, from a study of cores extracted from the Greenland ice cap. According to
the theory described here, this is essentially a record of stratospheric dusting due to
material from the progressively disintegrating Comet Encke progenitor. Note the rapid
flickering, the suddenness of onset of individual ‘flickers’, each a cosmic winter, and the
rapidity with which the ice age ended. These sudden changes are not consistent with
slow orbital and polar variations as the prime movers, but are expected on the giant
comet picture.

Aleck: This is wildly off topic. I've allowed it but no more of these, please.

Niberu be damned, a rock by any other name would hit just as hard. There's major shit on the way as usual this neck of the woods.

Many thanks for the link. 28 years old now, but pretty darn interesting all the same. More grist for the mill. Cheers.

Regarding the SS AM and Luminosity topic. Been pondering it overnight.

Thanks, expat, for pointing out what I had presumed was unintended. IF the "Sun's" AM DOES include the AM of all orbiting bodies, then isn't the whole thing even more meaningless?

Can't honestly see how Luminosity has any meaningful relationship to Angular Momentum anyway. Not to mention that the sun, unlike the rest of them, is undergoing nuclear fusion. (Reflective) Luminosity is most often dependent on purely superficial planetary features - the colour of the surface or most optically relevant layer, which may arise from any number of causes. Take Europa, for example.

Thus, I think it's pure Hoagwash.

Besides which, errors have been made. My calculations of SAM are 10^2 off. But they align with Hoagie's, so maybe he made the same error, and the whole thing is a crock! Oh, and of course, SAM is entirely dependent on the characteristics (size, period) of the orbit and nothing more, so Crock^2 to that!

Afterthought: Maybe Hoagie has heard of the H-R Diagram, and is hoping to become famous for 'his' "H-W" Diagram for planetary systems. Fat Chance!

Has someone cloned the OrbDrooler? Makes about as much sense.

« Can't honestly see how Luminosity has any meaningful relationship to Angular Momentum anyway. »

In other words, this whole thing is as much bollocks as the rest of Dark Mission.

There is a concerted effort to prohibit poignant bloggers from gaining notable reputation. I'm the most notorious troll on the Internet. I don't care about fame. Truth exists irrespective of futile efforts to erase it.

“Makes about as much sense.

Referring to what, I wonder... Nothing like a good bit of ambiguity.


And Anonymaas “I'm the most notorious troll on the Internet. I don't care about fame.”:

Please accept the annual ‘Goat of the Day’ Award!