On pp. 84-85 of Ancient Aliens on the Moon, the perennially error-prone Mike Bara displays one of the favorite images of all "lunar anomalists" — a 1965 image returned by the Soviet Moon-Mars probe Zond 3. 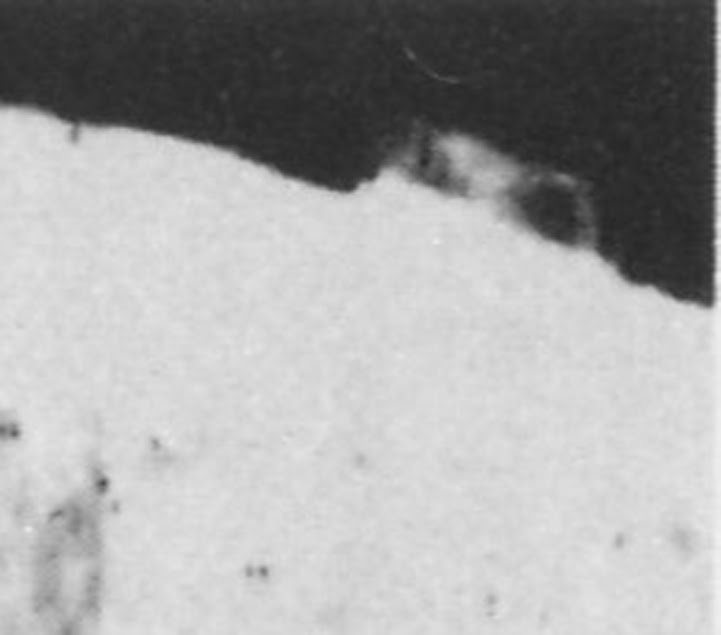 He writes this about it, as usual ignoring all reasonable explanations for the feature and emphasizing the one that supports his very shaky thesis:

"Located on the lunar horizon ... a large, eroded dome-like structure was plainly visible in the lower right corner ... [T]his "Zond 3 dome" extended several miles above the airless lunar horizon. ... I suspect that what Zond 3 captured was in fact the battered remains of a watch crystal type of dome just beneath the larger protecting scaffolding we've seen other places on the lunar surface."


Well, as I said, this one has done the rounds of the conspiracy nutcases for many years, and I got involved in a bit of argy-bargy this week with a poster to the Fuckery-Bookery page The Final Frontier. The guy slapped up the picture and captioned it "A dome on the moon." I challenged him to report the coordinates of the feature, so that I could examine the much better images in the LROC library to see if there was anything real at that point. He didn't know the coordinates. He didn't know the resolution of the image. He didn't know what image processing was used by Zond.

I had my own guess as to the coordinates, based on the relationship to Mare Orientale, which is clearly seen in the whole Zond image (and I thank Carol Behan for pointing that out.) I guessed it would have to be somewhere within this frame, centered on 24.5 S, 59 W. Here's a permalink. 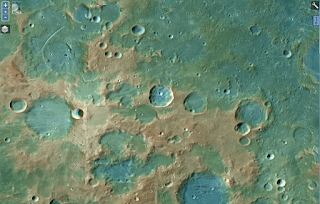 The original poster responded "Well obviously you will not find any evidence on anything that has been publicly released," which I thought probably signaled that we were at the end of any meaningful discussion.


Don Davis to the rescue

The renowned space artist Don Davis monitors that FB page, and his attempts to knock some sense into the flim-flam men and Branch Hoaglandians have been heroic and tireless.  Don's information about the Moon and Mars is highly reliable and very detailed. I reproduce his contribution here with Don's permission and with only very slight editing.

"Here is the story behind that Zond Moon photo, as a background to others interested in this subject.


The history of early Lunar exploration is chronicled in the NASA Special Publication 'Exploring Space With A Camera'. The far side of the Moon was first revealed by a pair of Soviet Lunar probes, beginning with Luna 3 in early October 1959 which sent back static degraded transmissions of its view of the Moon revealing a rarity of the dark 'maria' across much of the side we never see from Earth, but little else.On July 20, 1965 the next Soviet Lunar probe, Zond 3, obtained a view of the Eastern regions of the Lunar Far side, also including features visible from Earth for reference. It used an improved film camera which developed the film on board and scanned the negative, transmitting the image to Earth. The early Zond 3 photo releases were as prints, of which the frame shown in the NASA SP referenced above is an example. Soviet news release photos were not often known for their quality control, so making claims based on some minor detail in them is risky. There may also have been an effort to degrade the quality a little in the copying process to hide some of what they were capable of doing, as similar film readout methods were being used in spy satellites planned and flown by both nations. Such was the Cold War context of early space exploration.

I look at the bright blotch over the sky in the lower right corner and wonder what caused it, and where in the 1960s Soviet era duplication chain it appeared.There are two possibilities. Either a real visual display of large size was captured by the original camera optics along the Lunar horizon, or the light splotch was a photographic imperfection in the original or a fault in the duplication chain as a shiny original caught an uneven reflection of a ceiling light or something like that.
Fortunately the original Zond photography of the Moon has been recovered from the transmission data as the developed film was scanned on the spacecraft. Here is the image, Zond 3 picture 28.There is no sign of any bright projection from the Lunar limb (edge). Nor does it appear in any of the other Moon images made by Zond 3.This demonstrates that the original camera images show no extraordinary display corresponding to what appears in the initial very contrasty press release print.

But let us play 'What if?. What if the camera really saw something recorded as such a blotch projecting beyond the limb of the Moon? [T]his could resemble a volcanic plume such as [can be] seen erupting from Jupiters moon Io.So where on the Moon would such an erupting volcano (or ancient alien dome, if one wanted to commit oneself rather precariously) have to be located? 60 Degrees W, 30 Degrees South is about where that spot on the edge of the Moon should be just by comparing the photo with a front side Moon map. [NOTE: This point falls within the rectangular area I had guessed at]
If one was really careful about this a roughly rectangular area on the map could be defined as where something that large could be, if it is continuously there. it's 'base' would appear to be nearly as wide as the dark lava pool filled crater named Grimaldi, the prominent dark oval near the right limb. It would be about 60 miles across, just shy of 100 kilometers. This region of the Moon can be readily inspected through a telescope, and the lack of anything bright looming over that region of the Moon is the best evidence one can have that the most likely origin for that bright spot on the print was a mundane one somewhere in the photolabs of the Soviet news services.Of course, anyone wanting to make a claim of something extraordinary on the Moon is obliged to include as evidence the latest photos of the region taken by the Lunar Recon Orbiter. Orbiters from Japan, China and India have also mapped virtually the entire Moon independently, but the US satellite has the best quality data. Go explore the super detailed photo maps now becoming available, imagine being there one day on a rover or on foot!"

Very interesting. I never even ever heard of that book before now. I guess I'll have to go buy a copy so I know what you and Mr Bara are talking about.

If you mean Mike Bara's tragedy of errors AAotM, you should read this summary first.

James, how do you create a permalink to a feature on the LRO map?

ACT-REACT is in transition. In the old format there's a permalink link at extreme lower left. In the new format, look for a tiny tab labeled 'Share', top right under the tools icon.

Is there a review of "this summary" for me to consider before investing the time to actually read all that?

Hoag: The post was itself a review, so a review of it would have to be a meta-review. Alas no, I don't dare set down that path for fear I'd soon be writing meta-meta-meta-reviews.

It wouldn't be so damn long if Mike hadn't made so many errors y'know.

Yet another blatant demonstration of Mike Bara extreme schizophrenia. The hard core social determinist-ultra Libertarian who worships Ayn Rand & Margaret Thatcher,is having a mental & emotional breakdown over the loss of a pet dog.It`s OK to align yourself with Ayn Rand`s objectivist ethics, her rejection of altruism & her virtue of selfishness, but don't talk the talk if you can't walk the walk.Despite his tough rhetoric's, Mike Bara doesn't have what it takes to live in a society that rejects & denies the right to health care,employment, social security & civil rights.

In his blogpost of Dec 15th 2012, as he attached promo for his book to the Sandy Hook tragedy, Mike wrote "So out of tragedy we have at least one more proof that we are all connected, that there is a Force of love out there that binds us all together. Such proof can at least give us hope and comfort knowing that there is something beyond this crude, material existence we all inhabit."

Maybe that doesn't apply to his brother's dog.

Mike Bara`s interpretation of "Force of love" is intrinsically associated with the concept of "table dancing". Again I don`t understand how this 50 yr old hippie is capable of reconciling his "so called" political views, with his new age & spiritual quackery.

It's not a watch crystal dome. It's one of those Martian tripods from War of the Worlds. They're getting ready for the big invasion. The Russians were trying to warn us back then. The Americans covered it up like they always do. The Russians would never cover up anything.

Richard and Mikey were trying to warn us all the time but the Gubmint keep following them and silencing them.

IT'S A CONSPIRACY I TELLS YA! BUY TINFOIL NOW AND MAKE PROTECTIVE HEADGEAR!!!!

Hi folks: RE: The ZOND-3, frame 28 glitch. I copied and enhanced and enlarged the TWo frames: 1.) The ZOND-3 frame off the Russian Moon pictures web site. 2.) the frame as reproduced in the NASA SP 168 book, page 45. First of all, the NASA publication has over exposed the frame. Also this obscures somewhat the scan lines at bottom running horizontally to the right of the big round white spot. On the cleaner frame from the web site, the scan lines are very promonant. If you follow the line over to the right, you will see that where the glitch (glass dome?) is located, it happens to jut off into the darkness of space right at one of the scan lines. Whether the bulging glass dome (hick! burp!) derives from this or it is a splotch of throat gue from a russian cigarette smoker, caughed up while processing the photo is not yet decided. No matter, for sure the book frame is very over exposed compared to the fresh copy from the web site. See above link:

Before we have a full blown ancient astronaut vs dyed-in-the-wool skeptic bruhaha,lets first consider an optical question. If a picture is taken from the side and one is then shown a picture from above of the same area, and we throw in the supposition that the object in question is made of glass or another clear substance, then...how can you see that object from above? Unless there is a clear dome structure that has an marked edge around it, you couldn't locate it from above! This just like the Face On Mars controversy, plus you throw in different angles and lighting and the later picture was taken upside down with a more advanced camera, viola! Like comparing apples to oranges!

Thanks for your comment, it's nice to know people are browsing my archives occasionally.

In other writings Bara has claimed to have identified a "spar" that was part of the support structure of a glass dome.