Back in July 2008, Mike Bara the ersatz aeronautical engineer gave a long, long lecture at the CEF Research conference which was turned into an interminable 9-part Youtubathon containing all the classic Hoagland/Bara prevarications, half-truths and outright lies.

In Part 8, Mike says he works in the Space Park area of Redondo Beach, where all sorts of space-themed street names are common (Gemini Drive, Mercury Avenue, etc.) Then he adds a quasi-mystical piece of local info that turns out to be totally spurious. 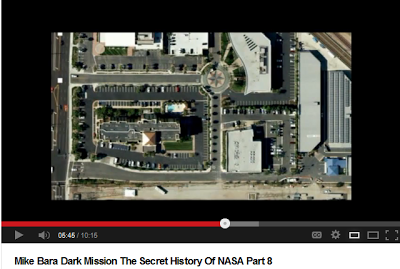 Well, for a start, that's 33rd St Manhattan Beach, not Redondo Beach, but that's a minor detail. The main point is that Isis Avenue and 33rd DO NOT INTERSECT. The Los Angeles County Metropolitan rail line slashes right across the landscape at that point. The 8-point star is somewhat to the East of the pin marker, in a service road. 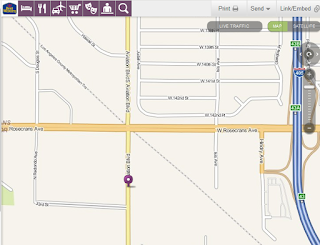 So what's the "cult symbol" all about? It's decoration in front of the Springhill Suites hotel. Here it is in Google Streetview: 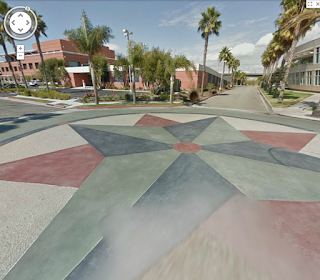 Mike lied, and I thank Youtube commenter jetmarkjetmark for giving me the idea to check this out.
at 9:29 AM

I almost feel sorry for the guy,he is incapable of producing anything remotely original.Engaged in a never ending process of scavenging & recycling other people`s garbage.This is beyond pathetic.

Such evidence of structures having origins or functions which the general public are not aware of is abundant - provided you are one of the very few who possess advanced powers of realisation and understanding of evolution and of the space-time continuum. As a member of that elite, I should perhaps reveal to you that the Shard, in London, is part of the British United Levitating Locomotion Spacefaring High Industry Team project designed with what appears to be an underground parking area but actually contains the largest first-stage launch engine in the world, intended for when Mankind (well, a few of us elite 'ones', naturally) has to travel far away to Uranus. We have found find it habitable there, contrary to 'common' thought.
Just thought I might mention that by way of illustration.

The first rule of Hoaglandism is never make a claim that can actually be checked out. You can claim an asteroid is a space ship or that there is an ancient city on Mars because no one will be visiting them anytime soon (soon being before you give that stunning presentation at some lame ass new age conference). You can even to have discovered a new branch of super secret physics, as long as you aren't stupid enough to make actual predictions based on that physics and keep things vague and incomprehensible.

What you can't do is make a clear statement about something that is both untrue and easily verifiable. Because is you do, some wise ass is likely to spend a little time to check your story. When the truth is discovered, you end up looking like the ass that you are.

Bara (may his tribe increase) won't care that his spurious and fanciful 'evidence' to all things great has been shot down with...oh, what's the word I'm looking for? Oh yes..facts. As clearly the non believers have all been accessed by the more unsavury residents of the Turkish prisons (and their incontence provisions)of which he's disturbingly familiar with. He with his buddy Hoaxland will sell another conference seat to yet another disciple who will go away 'thinking' they've been blessed with privileged astomishing and stunning information.

Clearly, the placement of cult symbols at the intersection of streets named by completely different bodies (manhattan beach and hawthorne) need not be any more accurate than the wide angular tolerance accepted by hyperdimensional physicists.

I wrote to Adrienne Loska (Mike Bara's manager) about this, and got this reply today:

"I just looked at Google maps, and the 2 streets certainly do intersect. Just draw lines on the map. I don't think you know what you are talking about, or what an intersection is."

Let's see a video of him driving there.

You can't expect the poor woman to rein in Bara's stupidity if she's no smarter than him, can you?