A baseline at last -- but it's self-defeating

We here at Emoluments HQ have been ragging on Hoagland for years now, about the pathetically inadequate protocols he reports from his Accutron measurements. One of our criticisms has been that he never presents baseline readings. In other words, when he shows us traces like the one below and calls them "stunning", we only have his word for it that the 40-year-old watch doesn't behave like that all the time. 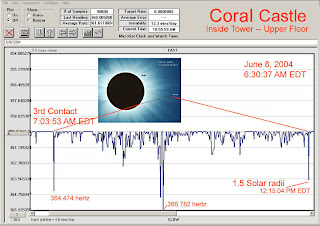 If it did, of course, that would render his "measurement" instantly meaningless, since it would just be the normal behavior of a malfunctioning wristwatch.

Well, it's beginning to seem that his baseline really is as wonky as his "stunning" experimental results. How about this, from the panel discussion at the Glendale Awake & Aware pseudo-conference:

[01:11:04]
Since I am measuring actual documented changes in the physics, particularly since the 2012 date... Where we live is miles away from the Sandias—which is this huge 12,000 ft mountain range that I conducted the solar eclipse measurements from, that you saw, that were so stunning... I now understand why native peoples think of mountains as sacred and spiritual, because the physics is higher there. It's simply a huge amplifier, solid state amplifier, of "The Force".

It used to be that I could do measurements in my office and I would get nothing but noise—straight line. You have to go to a pyramid, or to that mountain, to get really interesting stuff. Over the last several months, particularly the last several weeks, I have seen readings [...] that are as boggling as any at any pyramid anywhere in the world, just sitting there in the office. And it's replicable—it's happened more than once, in fact one set of readings was so bizarre it looked like it was some kind of artificial modulation of the torsion field, with square waves. You don't get square waves in nature—you don't get, y'know, when a supernova goes off, a pulsar rotates ... curves and all that. This was beautiful square waves. In one part the curve tracked from higher to lower frequency over a particular window of time like redundant messaging.

:: He reports this as though it's a new phenomenon. And yet, discussing the Inaccutron on Coast to Coast AM last June, he reported "The Accutron went nuts for 12 hours non-stop" in his office on the occasion of the summer solstice.

:: His expression "the physics is higher there" has no conceivable meaning.

:: He uses the word replicable. I point out that the behavior of a broken wristwatch is replicable, too, in that sense. But when real scientists use that word, they mean "When Procedure A is applied to a system, B is the reliable result." They do not mean "B happens quite often."

:: And then, we still have all our other objections to his protocol: No controls, no specific predictions, no actual stated measurements or even  a statement of what units the torsion field is measured in.

Truly junk science. In case any reader is totally new to this topic, there's a good summary here.
at 9:04 AM

Sorry, but no. You do not have evidence of a baseline being used here, all you have is Hoagland's word that he used one. That is not the same as actual data.

If you do take him at his word, he is admitting that the baseline has changed, dramatically. The standard scientific response to that kind of change is to look for factors inside the experiment that might have caused it and isolate those factors. Since Hoagie has no interest in real science (just the pretend kind he can wow George Noory with), expect no such analysis.

Hey, you can't knock a charaltan who quotes Star Wars, uses a broken watch, can come up with a wave form to demonstrate sod all and still expect everyone to be stunned. I couldn't bring myself to be so mendacious to make money from the easily led and troubled. I couldn't do it.

Well Chris, he didn't even actually say anything about baselines. Quite possibly he doesn't even know what one is, or why he needs one.

I'm just saying that an "experiment" that's already worthless now has to be counted as an almighty screw-up.

Strah: I assume he means that the frequency excursions detected by his Microset™ rig are square-top as opposed to the usual spikeys.

(And thx for that other message)

How come he doesn't use a Rolex?

He would say that's a stupid question -- because only the Bulova patent Accutron has a tuning fork whose frequency is affected by the torsion wave.

However, it may not be a stupid question at all. I don't know enough about the Rolex movement to be certain, but anything with a balance wheel should be vulnerable to having its inertia changed. Likewise, if Hoagland is correct many musical instruments should go out of tune in the proximity of pyramids and indeed any massive stone structure such as Coral Castle. There is no evidence of this, naturally.

Hoagland would say that my question is stupid? Well then screw that prick, Dick! The nerve of that old poop, to be calling my question stupid!

Not too long ago, I was a judge at an elementary school science fair. It seems to me that the experimental protocols Hoagland uses, as far as we know, is roughly the same quality as the students I encountered there. He gets extra points for creativity in what he is attempting to test, but demerits for not having a testable hypothesis before he begins testing ("going crazy" is not a good prediction), not having a control, having a super-small "sample size", and there may be other stuff I'm missing because I am not a scientist. I think it might also make sense to "blind" the procedure for analyzing the control/experimental groups.

Among the "other stuff" would be:

- Failing to state the orientation of the watch in relation to the spin axis of the body supposedly generating the torsion wave.

- Stating an incorrect time for the Venus transit 3rd contact.

- Failing to record the moment of dawn at Teotihuacan.

"I now understand why native peoples think of mountains as sacred and spiritual, because the physics is higher there."

Seems pretty clear to me: This higher you climb, the higher the physics. I'll bet the inverse is also true. If Hoagie were to take his watch down into a coal mine, hundreds of feet below the surface, he'd probably learn that the physics is lower down there.

The old Accutron watch is above all a nice metaphor for the state of RCH's mind. It seems then that he indeed was able to work more "straight" in his office once upon a time but latelely there seems way more contact bounce happening, producing all these wonderful square "artifical" patterns, like his scratched viewing surfaces always were showing from the day he saw first Cydonia. Perhaps in the past only in certain less stable atmospheres the data behaved a bit more wildly but the maddness has now become the new normal!

It's time to retire the watch, Richard. Please let others worry about disclosure for a while. Unless it's your own you still desire...

He should be thrown out for running outside the baseline.

"Not Robert Ghost Wolf said...
He should be thrown out for running outside the baseline."

Ahhh, you beat me to it. What a pickle.

I wonder if Richard feels slighted not being invited to appear at the "Citizen Hearing on Disclosure" to present his evidence? I'm thinking the participants could use a "Stunning Confirmation" or two.

Hoagie's tripe is so far down the rabbit hole these days that disclosure is down right tame by comparison. Every true blue Hoaglandian knows that disclosure is just the elite's way of distracting us while they do their evil deeds. When you have space Nazis living on the Moon, Mars, and the rings of Saturn, the truth about UFO's is just so yesterday.

Another goldie from Mikey's Facialbook:

Mike Bara
Saturday via Twitter
And more on the idicoy that is "Dark Energy": What is Dark Energy? http://t.co/rAaOw9NcOa via @SPACEdotcom

So space.com are talking out of their asses when they talk about "Dark Energy". Thanks for informing us Mike that scientists don't know nothing.
Maybe they should listen to you and Dick about Torsion Physics. I mean, there's so many equations in physics with unknown terms somebody snuck in, eh Mike.

Hoagie was on C2C last night (it was a quickie news update thing) talking about the research with his laptop/watch thing that he's doing in Hawaii. Again he claimed stunning results that confirm a kind of physics that will soon free us all. This time though, he claimed HAARP was trying to interfere with his data collection. Yeah, he's that damn important!.

Yes, I thought that was somewhat nauseating. "Unmistakable HAARP pulses" -- how the hell would he know what to expect from ionospheric HF?

He also said "I'll publish the results on Enterprise, on Facebook, anywhere where people are following my work." May I suggest THIS BLOG?

Didn't Hoagland blame Hurricane Katrina on HAARP? Given its destructive power, I'd say he's lucky they didn't do a lot more to him while they had him in their cross hairs.

Another "update" from Hoagland last night -- another promise that the Mauna Kea readings will soon be up on enterprisemishmash and foolbook.

We are six days away from the first anniversary of when he last posted to FB. That tell you anything?