Mike Bara, world-renowned aerospace engineer, gets it wrong on the Columbia disaster

Mike Bara has made it abundantly clear, recently, that he's strongly in favor of US citizens being armed with whatever firearms they can afford, including rapid-fire automatic assault rifles with 100-round magazines if that's what they think appropriate for shooting rabbits. He thinks Alex Jones was dead right and Piers Morgan is a moron douchebag. I'm not going to comment about that -- not my subject.

Mike has also made it very clear that he despises homosexuals — or should that be "fears homosexuals"? I'm not going to comment on that, either.

Today, however, Mike strayed into territory that I do feel competent to comment on. Namely, the problem of foam insulation shedding from the Space Shuttle external tank during launch, which led to the loss of Columbia and her crew nearly nine years ago now. Mike Facebooked:

It's simply not true

So apparently, scorn for environmental conservation goes along with militarism and homophobia. I can't really explain that — but anyway, there's no doubt that foam-shedding was the cause of the Columbia tragedy. A large piece of the left bipod ramp broke off and smashed a huge hole in the leading edge of the left wing. The bipod ramp is made entirely of foam — this is not a case of simple foam cladding on the outer wall of the tank. 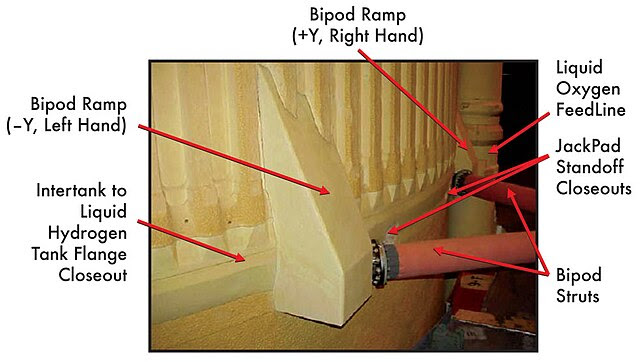 There was indeed a change in the composition of the foam during the history of the Shuttle. The original formula, BX250, included Freon, a gas which has been implicated in ozone depletion. The new formula was Freon-free, and that's presumably what the world-renowned aerospace engineer means by "green". But he evidently hasn't reviewed the history of foam-shedding events to verify that the change was responsible for the disaster. And, in fact, it clearly was not.

It flies in the face of all logic to conclude that a change made in 1997 was responsible for at least eight foam-shedding events, five of which were from the bipod ramp, during the years 1983-1995. And as if that were not enough of a rebuttal, consider this: The bipod ramps were exempt from the environmental regulations, and were made of the original BX250 foam.

Contemplating this and other similar embarrassing errors, I'm driven to the idea that Mr. Mike Bara really doesn't treat information the way most of us do. If he gets an idea—such as that "green" foam caused the death of the STS-107 crew—he'll publish it without really checking whether it's true or not. If it's material for a book, maybe he thinks "Oh, an editor will check that out, I don't need to bother." Surely by now he ought to know that the kind of Mickey-Mouse publishing houses he works with don't care about accuracy and don't have editors in the sense that professionals attach to that word.

Mike has once again shown just how careful a researcher he is, and how much contempt for his audience he has.

By the way, he also wrote "The 787 Dreamliner is the "greenest" jet in world [sic]. Of course, that means it's a technical disaster and doesn't work."
A bit of a premature judgement, I'd say.

The Shuttles were too complicated. The Dreamliner uses a lot of Carbon fiber. It's too early to say how that turns out.

BU,
In any case, Bara is in no position to judge such things. He was a CADCAM operator, not an engineer.

Ehhh, Bara's every statement is pretty much tailored to his target demographic. It's not like anybody who doesn't already agree with him is going to read what he writes, nod sagely, and agree that his logic and evidence are irrefutable and change a previously-held opinion. He's actually quite a bit like Alex Jones, and maybe he's taken some cues from him. I doubt whether Bara or Jones have ever convinced anyone whose viewpoints aren't already leaning in the government-is-trying-to-kill-you direction. Despite what they both want to believe, there isn't a landslide of public opinion coalescing around them, they aren't about to become leaders of the revolution, and there's a damn good reason they're going to remain marginalized: most rational people start edging toward the exits as soon as they open their mouths.

I would like to see the foam damage to the Shuttle. I remember that they were always worried about those Tiles.

Of course, the actual damaged wing leading edge of Columbia is not available for inspection. But the wikipedia page includes images of the simulation, in which a representative block of foam was fired at an RCC panel like the one on Columbia, creating a 41 x 42.5 cm hole.

Wow, what a FUCKING ASSHOLE Mike Bara is. To try and exploit the Columbia tragedy in order to promote an anti-environmentalist agenda?

That is just unspeakably sick.

"Mike Bara has made it abundantly clear, recently, that he's strongly in favor of US citizens being armed with whatever firearms they can afford"

I have not been able to find anything online verifying the Bara is an engineer. He apparently worked for engineers as a CAD operator. If he has a degree I'd like to see at what college and what year he graduated so I can look it up.

Bara dropped out of Seattle Pacific UNiversity without graducating. He granduated from Chief Sealth High School in 78 so he probably dropped out in 1980-ish.

Thanks for the question.