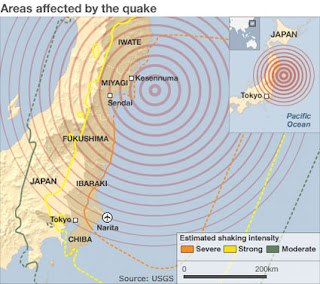 It must make Richard Hoagland & Mike Bara eat their hearts out that the colossal earthquake at Sendai didn't happen anywhere near 19.5° latitude (the epicenter was 38.321°N.) Neither did the recent Christchurch quake (43.58°S) or, in fact, any of the top ten:


As we know, Richard Hoagland thinks nothing of announcing that a major earthquake is at 19.5° even when it quite obviously is not. However, even he would not stretch a point that far and so Sendai is another FAIL for the theory that rotating planets create energy upwelling at 19.5° N and S.

Both Hoagland and Bara, in their respective publications, have listed energetic features in the solar system as confirming the theory when in fact they do not. They have even stated in writing that sunspots originate at 19.5° which must make solar system astronomers stretch their eyes somewhat. The one that makes me giggle is Io, the innermost moon of Jupiter. 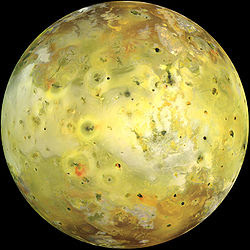 Tidal heating from Jupiter makes Io the most geologically active object in the entire solar system, with at least 400 active volcanoes. Hoagland & Bara refer hand-wavingly to "the volcanoes of Io" as 19.5° features. I've tried asking Mike Bara which of the 400 are at 19.5° but, sadly, no answer has been forthcoming.


Update 1: Somebody who knows the Solar System better than me writes that Pillan Patera, Io's most active volcano, is at 12° 20' S.

So, let's see—the planetary energy theory is blown, the ritual alignment "model" is blown, the undiscovered giant planet idea is blown. Not a good time for pseudoscience.

Update 2: Well, blow me down with a feather. Hoagland actually did try and force the Sendai event (now preferentially known as the Tohoku event) to fit his daft pattern, on Coast to Coast AM last Thursday/Friday 24/25 March. He pointed out that its latitude, 38° 19', was pretty close to double 19.5°, and its longitude, 142° 22', was pretty close to 120° east of the Great Pyramid.

Well, it's certainly news to me that his theory predicts anything special at double-19.5, and as for the longitude, the "pyramid-plus-120" line passes 8° 46' -- or 765 km -- further East, out in the Pacific. So once again Hoagland is trying the ex post facto prediction trick.

Later on his FB page he attempted to excuse himself:

Remember, we are NOT talking about precise longitude and latitude "lines" ... but "bands of activity" -- as with any physical process ....


Pretty pathetic, since he didn't quantify the width of these "bands of activity," and the positions of tectonic plate junctions all over the world are of course known with far greater precision than 8°.

By the way, he also predicted that Gabrielle Giffords will be Obama's running mate for the 2012 election.

I'm beginning to think that Hoagland has decided putting anything in writing (that non-worshipers can get access to) is a very bad idea. He's been back from his excellent adventure for a few days and nothing new has shown up on either the EM website or his public FB page. He seems to have gone into hiding. Very strange.

Maybe he's retired. Coming up on the 66th birthday, y'know.

You may be right. His big "return to Face Book" a few weeks ago was a total bust (not even George Noory bought the Temple 1 as a space ship thing) and he's been striking out ever since. He can't really come into the public FB page without being fact checked, and the same goes for any papers he might put up on the EM website.
Everywhere he turns, he faces the possibility of losing what little credibility he has left.

Another factor here might be that his revenue stream these days has to be a bit limited. He has no new book coming out soon (if he did, he'd be promoting the thing to death by now), and his DVD stuff is available on Youtube. Add it all up and you have a good reason to just sit back and let Robin do the earning.

Expat, I believe he is claiming that the double 19.5 thing is a ritual number and that the earthquake was caused by someone (using the super science of HD physics of course) who was adhering to that ritual. Yeah, it sounded pretty dumb when I was typing it too.