Last night, in a spectacular display of superhuman ignorance, Richard Hoagland managed to ask the wrongest possible question about arsenic substitution in biochemistry, and then capped it by coming up with the most ridiculous possible answer. He wondered aloud to his radio audience of millions why none of the journalists at the afternoon's NASA press conference had asked whether the extremophile bacterium GFAJ-1 came from an extraterrestrial source, and declared that to him the answer was obvious — yes, of course it did. "There is an alien in our midst," he said theatrically.

To recap, for those who did not follow the day's events, the NASA astrobiology program called the conference to announce a very unusual finding. Geomicrobiologist (and, it turns out, accomplished oboist) Felisa Wolfe-Simon, a rather fetching tousle-haired nerd's dream-girl, took the credit for the discovery that, in conditions of restricted environmental phosphorous, GFAJ-1 can use arsenic instead, in building the DNA backbone upon which it depends to function. Wolfe-Simon had theorized that this might be possible, and had gone to Mono Lake in a successful search for proof.

It was a pretty brilliant piece of work by Dr Wolfe-Simon, and it took an intellect as puny as that of Richard C. Hoagland to misunderstand it quite that thoroughly. 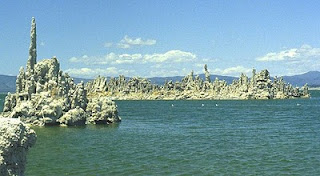 Mono Lake, a couple of hundred miles East of San Francisco, is a natural chemistry experiment gone awry. Indifferent water management over the centuries has made it highly saline and unusually alkaline, and mine tailings from the California gold rush have bequeathed it near-toxic levels of arsenic. Yet gamma-proteobacteria like GFAJ-1 have found a way to make a living there.

It's one of the best-established principles of evolution that organisms adapt to their environment. If the environment places stress on a population — say by getting hotter, drier, or more acidic — the population is selected for those individuals that tolerate the stress best. Over time, the population either fails to adapt and dies out, or develops a new strain that finds the environment congenial. Well, lo and behold, as Lake Mono became deficient in phosphorous and oversupplied with arsenic, the plucky little bacterium found a way of making do. High arsenic = arsenic-tolerant bacteria. Simple, really. So for Richard Hoagland, with no knowledge of biochemistry whatsoever, to ask which distant galaxy might have seeded the lake with GFAJ-1 is like him finding an apple on the ground under an apple tree and saying "Hmmm, wonder where that came from?"


Sagan misquoted
We did not have to wait long, either, before Hoagland's attempts to justify his error led him deeper into the jungle of misunderstanding. He quoted Carl Sagan to the effect that a different form of DNA would be the hallmark of an extraterrestrial organism. What Sagan actually said was that a different DNA code would be the hallmark. That's a crucially different proposition, because phosphorous (or in the present case, arsenic) takes no part in the genetic code that is DNA's primary business.

The DNA molecule has been likened to two intertwined spiral staircases — and the metaphor works well up to a point. The four-letter code of A,T,C,G is contained on the stair steps. Where one step is an A, its matching step on the other spiral must be a T. Where one is a C, the other must be a G. However, an actual double stairway would have a central pillar to support the whole structure — and there the metaphor fails because there's no molecular equivalent. Instead the supporting "backbone" of DNA is on the outside — looking more like the handrails of the stairs. And it's here that phosphorous, alternating with what are essentially sugars, plays its essential role. In short, the substitution of arsenic for phosphorous is just a cleverly improvised feat of molecular carpentry and would not signify extraterrestrial origin to anyone with any knowledge of biochemistry.


Testing for life on Mars
Later in the first hour, Hoagland remarked "This marks the first time NASA has grappled with the concept 'What is Life?'" That idea would certainly bring a smile to the face of any of the hundreds of NASA-contracted bioscientists who confronted that very question as the biology instruments for the Viking Mars landers were being designed in the early 1970s. The question defies any easy answer — in fact, the Viking biology group never really made up its collective mind, instead sending three separate instruments each with its own assumption about the sine qua non of Life. It's also worth noting that some people — including Hoagland himself, as it happens — think that, even with 2 belts and one pair of braces, Viking's trousers still fell down.


The numerology of the space shuttle
In the second hour Hoagland took off into the unintentionally comic territory of numerology. I found it hard to follow — it appeared to incorporate a strange form of mathematics in which the numbers 33 and 133 are identical. It came as no surprise, though, that he wanted to make something ritualistic of the fact that the atomic number of arsenic is 33. That's right, Richard — the sinister Masonic conspiracy within NASA reached back across 100 years of history to dump arsenic in Mono Lake for just that reason. Yeah, man.

I did sort-of follow his next proposition — namely, that the still-upcoming STS-133 space shuttle mission is the first "post-Newtonian" mission. This means, according to Hoaglandian logic, that the energy needed to get the shuttle to orbit will come, not from old-fashioned rocket fuel, but from "hyperdimensional space, torsion physics, and etc. etc. etc." I'm sure this comes as a surprise to everybody involved in the mission.

A classic Hoaglandian performance, ending with — guess what? — an 800 number that will put cash in the Hoagland pocket.

Update 1:
Two criticisms of the experiment from biochemists have now surfaced in the blogosphere. Both seem quite harsh.

Although it might be entertaining to watch the biochemists slug it out in blogs, you can bet that isn't going to happen. It's just not dignified for the lead author of a paper in a peer-reviewed journal to respond to informal critiques.

Update 2:
Well, surprise—there is now a response from Dr Wolfe-Simon, although not in a blog or a tweet.

To be honest, I was hoping for an extraterrestrial origin too, until I found out the nucleotides were the same. I also knew that he'd be using the conference as another form of "stunning proof" of the "drip drip drip disclosure" meme. While he got some of the science right (on his FB page anyway), he missed completely the real significance of it all. His pathological need denigrate NASA as some ritual based organization has (once again) prevented him from seeing the real story.

BTW, how did Zimmerman do? I love his Beyond the Black website, so I'm a fan.

Chris: Yes, your comment is spot on. I regret that I unintentionally snoozed through Bob Zimmerman -- not once, but twice, since my local talk radio station runs an insta-repeat of C2C. I'm quite sure that Bob got it right, and I thought I detected a hint of Zimmerman/Hoagland animosity. It wouldn't be too surprising, and it would explain why they were kept strictly apart last night.

Bob Zimmerman's 40 mins
is now up. I'm not sure he was wise to lead so strongly with the "irresponsible journalism" angle, but his exobiology was impeccable, other than the slight slip where he said oxygen instead of carbon.

Zimmerman is every bit as entertaining as Hoagland, with the added advantage of accuracy.

Expat, I can see why you don't think he should have led with that, C2C is definitely the wrong audience to preach the idea of fact over speculation. You had to feel sorry for him trying to keep Noory grounded in reality. He came off as a bit of a kill joy a few times.

The "miraculous" spiral staircase at Loretto Chapel in Santa Fe, built entirely of wood with no nails by a truly expert carpenter in the late 1800's, does two complete turns with no centerpost. Originally it didn't even have handrails, making it look even more like the DNA spiral.

The "miraculous" spiral staircase isn't being used because it's unstable and deemed unsafe.