The Mars seismic and heat flow lander known as InSight (for Interior Exploration using Seismic Investigations, Geodesy and Heat Transport) has definitely had its share of problems since its successful landing in Elysium Planitia on 26th November 2018. The seismometer and heat flow experiments were successfully deployed onto the surface and useful data returned. But the heat flow experiment included a digging mole which, it was hoped, would burrow as much as 5m into the Martian soil in a two-month process.

However, the dig has not yet happened to any appreciable extent. The mole just doesn't seem able to make the kind of progress that was expected. Attempts to help it along by pushing down on it with the scoop have been partly successful, but are self-limited to the extent that, once the mole is properly buried, that technique will no longer be an option. JPL scientists now think that Martian soil simply doesn't have enough friction, but they have not given up.

Hidden Mission
The Hidden Mission Forum, created in 2011 by Keith Laney, is a collection of bad-tempered redneck NASA-haters who collectively have a strong belief that Mars and The Moon were once the home of advanced civilizations. They spend their days moaning to each other about NASA's cover-up of these "facts", and they are extremely intolerant of contrary evidence. Any dissenter who joins the forum is extremely unwelcome. Some have been subjected to juvenile sexual taunting; some have been summarily kicked out.

One of HMF's stalwarts using the nickname Vianova (and a John Wayne avatar) recently posted this, commenting on InSight's unexpected difficulty:

Give up the fucking ghost, please. Just mercifully throw in the towel. Maybe God will be good and send a meteor to fly splat that piece of shit Mole and fake news space mission."

"El Cheapo NASA space missions with tinker toy contraptions to do science, are bound to have recurrent problems. ... NASA doesn't know how to think big, they only think small investment, with inevitable small return, and then when they get some data, they call it a science bonanza. Even if they obviously fail, and play out a propaganda stunt in the news media, after giving themselves reward ceremonies for failing, by calling it a success."

FACT: Cost of InSight was $425 million, kept low by re-using the landing system developed for Phoenix. That compares with about $2.5 billion for Mars Science Laboratory, the brilliantly successful mission that soft-landed the Curiosity rover in Gale crater eight years ago.
Ignorance
In July 2015, after the Dawn and New Horizons missions both suffered computer glitches that were rapidly resolved, Keith Laney wrote that JPL mission managers would rather sabotage their own missions than "come clean" about what they really see in the Solar System. That's a measure of how much The Hidden Mission understands about mission management.
Update 17th October
JPL announced today that Insight's mole is at last completely buried. No word from HMF. 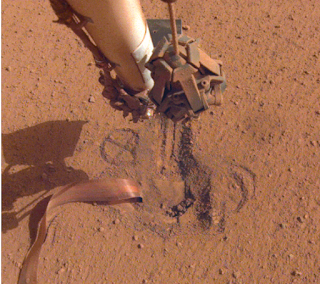