George Haas is off his rocker

George Haas is a sculptor in Purcellville, a historic township in rural Virginia. He got interested in the so-called "Face" on Mars after reading a book about it by Randolfo Rafael Pozos in 1991. He researched other "anomalies" on the Moon and Mars, and established, with William Saunders, what he called The Cydonia Institute as an imitation of a research institute. The institute's website currrently lists five members in addition to Haas and Saunders, one of whom I suspect is Haas's wife, also a sculptor.

If you think Richard Hoagland and Mike Bara, proponents of the "Face" on Mars, are bamboozled by pareidolia, you ain't, as they say, seen nuthin' yet. George Haas's'examinations of NASA's Mars imagery (his slogan: "Through NASA's own photographs the truth will be revealed") have shown him what he says are:

I will respect Haas's wish that the content of his web site not be reproduced without written permission, but here's his Nefertiti, taken from the pinterest site: 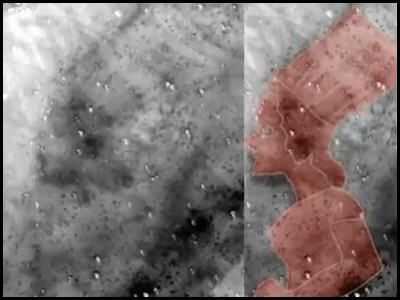 It is what it is — a totally fanciful coloration imposed on the Martian surface by a human artist. Something in the terrain reminded Haas of the famous Thutmose bust of Nefertiti, but any idea that some Martian civilization laid out this miles-long feature as a deliberate copy of the Thutmose bust is utterly lunatic. How would a Martian have knowledge of Nefertiti? Haas does not explain. 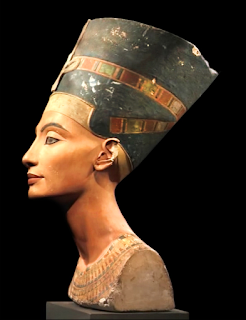 Haas reports on these bizarre imaginitive findings in a series of web-published articles written in the style of science papers or memoranda, complete with elaborate footnoting. He calls these essays "Field Journals," though quite obviously he has not been "in the field" in any normal sense of the expression.

Latest of these lash-ups is Vol. 23 No. 1 — The Raptor Zone Complex. It concerns a series of terrain features in Elysium Planitia, a region covering approximately 0°N to 20.0°N and from 140°E to 170°E. "Anomalies" in this region were first noticed by a South African video-gamer, Jean Ward, in a strip from the Context camera of Mars Reconnaissance Orbiter centered at 7.73° E, 148.56° N. Just like Haas himself, Ward regularly reports on his blog what he thinks he sees in NASA imagery. He writes about The Chewbacca Outpost, The Baltic Sea Anomaly/Millennium Falcon analog and The Star Ship Enterprise analog on Mars. Unlike Haas, however, Ward is quite diffident about his "findings". He writes:

« My intention is only to share anomalies I’ve discovered on Mars and not to convince anyone that there is or was a civilization on Mars. As Will Farrar from WhatsUpInTheSky says: “I see what I see, you see what you see.” »

In his re-reporting, however, George Haas was far from diffident. Where Ward thought he saw a pistol, Haas sees the head of an eagle, and he writes that a Martian civilization might have placed the structure as a marker or beacon alerting orbital travelers above that a settlement was located below. As I'm respecting Haas's copyright I won't reproduce his diagram here, but it's Fig.5 in his Journal — check it out. To my mind, there's no justification whatsoever for asserting that this is a contrived representation of a bird. It's a butte just like thousands of others on Mars.

Haas has been a guest on Coast to Coast AM many times over the years, most recently last Thursday night when he described this and other fantasies. You can also eyeball the eagle head in the set of images posted on the C2C site. Naturally, he was not challenged by George Noory, not even when he said "There are signs that Venus was once inhabited." Coast to Coast welcomes loonies as guests and does not embarrass them by asking awkward questions.

good day expat. I've been reading your blog (and comments) pretty much everyday, and can't tell you how much I enjoy it. I am a skeptic who "wants" to believe in crazy ideas, but so far, I haven't seen anything close to proof. Reason I'm finally writing is because I want to thank you for the links to the "web sites" so we can see just how ridiculous these people are And just how funny they can be and not even know it. Thank you!!

Haas was a prolific poster on Graham Hancock's forum for many years, using the handle 'Zip Monster', and often promoting his 'conferences', pareidolia and papers there, referring to himself in the third person.

He used the handle "Zip Monster" on Keith Laney's Hidden Mission Forum too, until Keith banned him.

At that point he joined an élite club. I was banned from HMF as well.