« [T]he compelling question has to be asked – has there been a head start program in space and have we been conducting space war operations since Apollo? Has this program been ongoing or was it abandoned after 1979 and then rebooted during the S.D.I proposals of Ronald Regan – the program that was eventually called the Star wars Program. »

The answers are no, no, no and no. The questions were posed by Clyde Lewis of the "Ground Zero" website/internet radio show, in a long article titled STRATOSFEAR, THE SECRET SPACE WAR published yesterday. The article summarizes a discussion in a TV studio between Lewis, Space Shuttle astronaut Leland Melvin, and Mike Bara. That's Mike Bara the self-worshipper who, according to the Rational Wikipedia, is homophobic as well as mysogynistic. He constantly claims to be a NYT best-selling author even though IT'S NOT TRUE.

Moonbase
Well, the "secret space war" turns out to be the not-very-secret Project Horizon, a proposal drafted in 1959 to establish a military Moon base staffed by 12 U.S.Army officers, costing $7 billion. Lewis writes:


« As cameras were rolling, we discussed the lunar objectives that were pre NASA including the military’s plan to build a space station on the moon before 1969. Back in 2016, I presented a program where I uncovered documents about Project Horizon a secret space station that was supposed to be built on the moon. »

"Uncovered", eh Clyde? The existence of Horizon was reported by Astronautix in 2005 and was probably public knowledge well before that. Wikipedia's first page on Horizon was dated 2 July 2005, and today it's a quite detailed exposition, last edited nearly a year ago.

One key point to understand about Horizon is that it never happened. As the wiki reports (citing John Logsden in 2010),note 1 Eisenhower nixed it as NASA was created as a civilian agency in 1959. In two of his published books,note 2 Mike Bara has suggested that Horizon may not have been cancelled but may have been secretly built, manned, and declared operational. Clyde Lewis seems to agree:


« We were told that the military was not part of the moon shot in 1969. We are told that it was NASA that sent the astronauts there. So the question is, was the military already on the moon, sent on a secret away mission and was the astronaut’ giant leap merely a show for the public to cheer on.»

Don'cha love those rhetorical questions? They allow speculators to hint that they know more than they're allowed to say, without requiring anything resembling evidence. Again, the answers are no and no.

Noise
Well, I headed this article "Ignorant speculator" so perhaps I'd better justify the adjective. The report that Lewis cites estimates that construction of the base would require 61 Saturn I and 88 Saturn II launches through November 1966, with another 64 launches during the first year of operation. Anyone who thinks that program could have been conducted in secret cannot have been anywhere near a Saturn rocket launch. Those things were NOISY.

Another key point is the actual structure envisaged for Horizon. Here are two illustrations from the report that Clyde Lewis himself cited (which, by the way, is included in the 2005 Astronautix report): 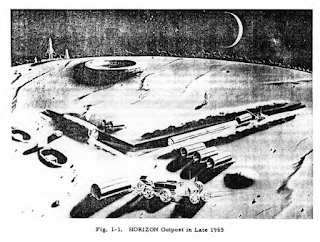 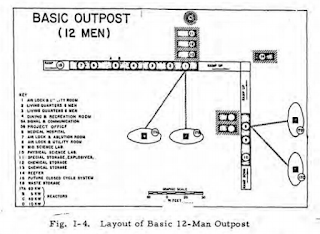 This thing is not buried out of sight— it's right there on the surface. Before it was even half built, every amateur astronomer in the world would be saying "Er... excuse me... WTF IS THAT?"

Lewis provides documentation of three other historical moonbase projects—one of which involved Carl Sagan—but these, like Horizon, never got beyond the planning stages.

As part of his just-published article, Clyde Lewis seeks to link his speculations to Wikileaks and Julian Assange, who has been in the news lately. He cites REPORT THAT UR DESTROYED SECRET US BASE ON MOON.  This Wikileaks link references a report that seems to have been written in January 1979 and declassified in December 2012, but since there's no content here it's impossible to assess whether the original is credible. "UR" is supposedly code for The Soviet Union. As I've written many times before, we now have such excellent high-defintion photographic coverage of the Moon that any speculations about alien activities, military operations, or vast glass domes look a bit pathetic.

I hope I've written enough to convince any doubters that Clyde Lewis's piece is worthless speculation from two arrivistes who know a great deal less than they think they do.

Does it make you feel better to believe that we don't have it? Why do our enemies always get to know more than citizens and tax payers?

Feel better? I don't have feelings, Thea, I'm a cold analytical machine. And who is the "our" of which you write? If you mean the USA, I remind you that this is the Internet, not Americky.

THE... does it make you feel better to think that we do?

Feelings don't come in to this, it's either there or it's not.

With the complete lack of evidence for it, as well as the sheer ridiculousness of such a thing being designed, manufactured, launched, built and operated in secret, the answer would be "not".

US has it, you bad home boys. Once again, America feeds the World. All throughout the Cold War, the United States sent food to Russia. Until Tuesday, Russia wouldn't let Venezuelans have any from US. If we (US) neglects to enforce the Monroe Doctrine, it's because we've got Star Wars.

There were a lot of those kinds of programs back during the Cold War. Pie in the sky plans that literally never went anywhere. Even the less ambitious ones like Blue Gemini never got much beyond the planning stage.

As to feelings, most of us would be very happy to find out we actually have a military base on the Moon with brave men and women (Major Matt Mason lives!!!) guarding us from threats from interstellar space. We'd be happy, but wishing doesn't make it so. Too bad really, but reality is what it is.

It never fails to amaze or amuse me, how these proponents of a 'lunar base' aren't all over the LRO atlas, trying to find it. It's as if the LRO data just doesn't exist, despite its highest resolution being 0.5 metres per pixel in most places. Why do they ignore it?

Trekker: Of course they excuse their lack of interest in the LRO library by saying they don't trust it because NASA might have "sanitized" it. But then, they don't look at the Japanese data either.

I've heard the 'sanitized' excuse - but when asked to produce evidence of it, they never can!

Their favorite is to show imagery from the US Navy "Clementine" mission, with blurring over stitching uncertainties. Several examples here.

Ah, yes, the towers near Hayn crater! I'm familiar with that. It only took a few seconds of examining the LRO images of the area, of course, to show that nothing of the sort existed there. Same with the later version of the Clementine browser. Nothing there.

I debunked one of those claims here

If you point them at Japanese, Indian or Chinese data they just claim they are all in it together. You point out that you can download raw unedited images (and write detailed instructions on how to process them), or even show them original pre-digital images from the 1960s and it's like they can't see the words you write.

How did the Horizon delivery manage to avoid the huge glass structures on the Moon? A conundrum indeed, at least for Mike.

Chris, the obvious and absolutely irrefutable "true" answer must be that the "glistening, glass ruins" became ruined only because of all the "secret" and not-so-secret Earth "vehicles" trying to "land" there in the first place. Sorry, I felt the inexplicable urge to use quotation marks today....

In the book titled, "We Discovered Alien Bases On The Moon" a photograph of a lunar cloud is shown. What is the explanation for that photo? Curious to what it really is. Having some experience with photography, I have some ideas. Not sure if they are valid or not. If this photo were taken on Earth, someone would claim it was a ghost.

The book was published in 1981. The author was Fred Steckling, who as far as I know wrote nothing else professionally. Google tells me that he appeared in one of Jose Escamilla's frighteningly bad video productions.

Was the photo a NASA release? Does it have a catalog number? Or what? I can't comment on an image I've never seen, sorry.

From an Amazon reader review of Steckling's book:

« How was the Moon's gravity calculated? Turns out it is 64% of the earths, not less than 20%. It has a light atmosphere. It has plenty of water. It has a mild magnetic field. »

Oh, I see. This book is just misinformation. Ignore it, Anthony.

I have an e-copy of Steckling's book, and it is absolute garbage all the way through. He makes several claims of clouds in photographs - they all seem to be Lunar Orbiter images that he has overexposed to death (now where have we seen that trick before?) or they are the emulsion errors that appeared during development in lunar orbit.

I appreciate your permanent closing a pop-up of nagging curiosity. Some of my college professors were enamored with this book. Space was not their area of expertise.

Fred Steckling has an interesting history. An associate of George Adamski, he became head of the Adamski Foundation. His son now heads the Foundation and has issued an updated version of the moon base book.

Adamski stated that he met Venusians, was taken aboard saucers and saw a temperate region on the moon, and that all planets are inhabited. I suppose if you accept that, then speculation about moon bases and gravity would come easy,

Fred also wrote "Why They Are Here: Spaceships from Other Words."

I am sorry does it say in your bio Expat that you are an Onanist? You know when you attack people because of some caustic rational Wiki -- I question your credibility. When someone asks questions and speculates to spark thought-- there is always some irrelevant crone that wants attention so bad that he makes snide comments that amount to about as much as toenails in a pile of dog poop. You are that person. I am sorry that you are so sad and irrelevant that you sound as cranky as those who question -- LOL maybe you would do better blogging on a bathroom wall -- but then again the internet tends to work.

Verily, Internet discussions seem to bring out the worst in some people.