"I am preparing a fact check update for Earthfiles and my December 27-28, 2018, Coast to Coast AM radio broadcast with the finding that the original November 29, 2018, three-part tale by 71-year-old Jon Lavine ... appears to be mostly dishonest for reasons unknown. In the face of contradictory facts, Lavine keeps insisting his secret astronaut story is real, even though many of his assertions don't hold up credibly under research scrutiny that will be laid out in my upcoming fact check updates."

That climb-down appeared before Christmas on LMH's earthfiles website. Always heart-warming to see a pseudo-scientist admit error—it doesn't happen nearly often enough, in my NSHO. My earlier bloggery pouring scorn on Linda's three-part cock-and-bull story about secret extended Apollo missions and aliens on the Moon was very popular, having 650 page views so far. I thought maybe my own efforts were partly responsible for the back-pedalling over at earthfiles, but in the same announcement LMH credits five specific information sources, and this blog isn't one of them.

I also e-mailed LMH pouring a little more scorn in her direction. She wrote "My goal is always the pressure of fact" (LOL) and she cited this disclaimer:


"Real X-Files do not always have hard proof, but the firsthand testimonies are presented as valuable to consider in the challenge of determining facts and truth in subjects that American and other governments have hidden behind policies of lies and denials in the interest of national security."

I interpret that as "CAUTION: This website contains unverified, un-investigated bullshit".

Linda calls herself an "investigative reporter". It seems to me that she cannot possibly have done even the minimum investigation of Jon Lavine's story before swallowing it and promoting it both on earthfiles and on Coast-to-Coast AM. She would have saved herself this professional embarrassment if she'd merely asked the following questions:


Returning to Coast-to-Coast AM for her monthly stint on 27 December, LMH trotted out a whole bunch of hearsay about how the CIA and MK-Ultra have perfected the techniques of mind control, memory-wiping and memory substitution. In an almost-apology for the earlier story, her strong suggestion was that Jon Lavine had been the victim of false memory implantation. I think that's supposed to be excusing Lavine, along the lines of "He wasn't bullshitting me, he really believes he flew that mission". All I have to offer on that is more scorn.

Update 31 December:
Linda's been busy. She has now published a long web page titled Trying to Separate Facts from Fiction in Strange Jon Lavine Tale. Later: ooops, she deleted it! Later still: oops, she put it back.  The piece is very disjointed, and takes off into irrelevant backwaters such as Project Horizon (which was cancelled before ever flying). To me, it looks like a first draft of something that will be rewritten and drastically trimmed at some later time.

Linda admits that the curriculum vitae Lavine gave her was fraudulent. She admits that a photograph he gave her, purporting to be him preparing for the Apollo 20 launch in 1976, was in fact of NASA astronaut Katherine Sullivan. She admits that a Saturn V could not have launched from Vandenburg.  However, none of that seems to be enough for this "investigative reporter" to declare Lavine a liar, apologize for her gullibility, and put the story to bed. She rambles on about MKULTRA memory-substitution experiments, clearly continuing to suggest that Lavine may be a victim instead of a fraud. Is anybody going to believe this poppycock?

Here's the photo Linda embedded in her later essay, writing that it was Lavine's evidence that he really did meet an alien on the Moon: 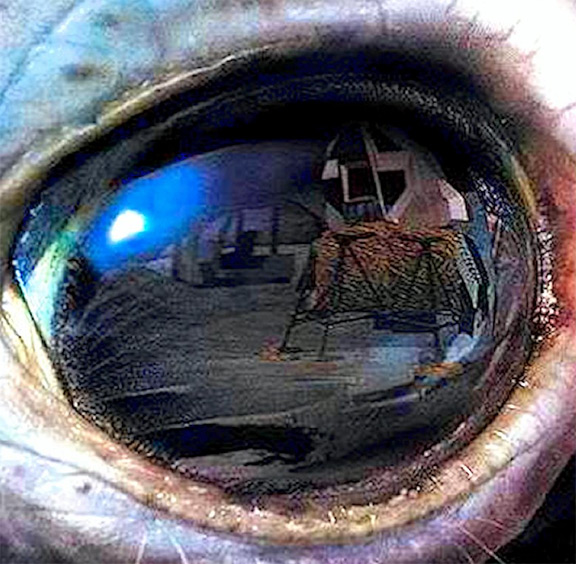 I haven't seen that pic. It must be in the online version I'm not willing to pay for.

Yes, it's disappointing but far from the first time this lady has fallen for utter bullshit about the US space program.

Anonymous - can you post the image, so that we can all see it?

I found it interesting the way in which, Jacques Vallée, in one of his fine books, only subtly criticized, Linda Moulton Howe, for her conclusions with regard to the Rendlesham Forest incident, as if to give her the benefit of a doubt for her being in error.

Linda Moulton Howe, is a high level Air Force, brat, who lives down the road from Richard C. Hoagland, near Los Alomos. She and Dick are most likely, paid by the same handlers, to be agents of disinformation. My guess would be the US Department of Energy.

I highly doubt that, but of course we're never going to get reliable info either way.

Then you do see the utility?