The question of the authentic color of the Martian sky raised its ugly head once more as soon as the first image from the InSight lander was available two days ago. I argued a bit with a blog commenter just yesterday on that very question. Adrian asserted that "They [nasa] actually for years used filters in order to create the illusion that on Mars everything looks a bit red/orange," and I denied it, citing the page made by space artist Don Davis on the question. Don makes the point that the color of a scene is highly dependent on the color of the light that is illuminating it. He shows this photo-pair from a Viking lander: 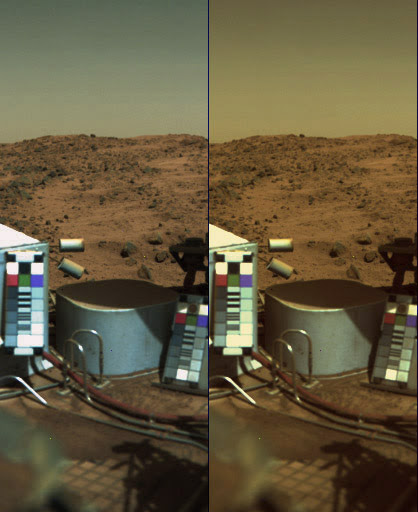 On the right is the best rendering of the scene actually on Mars. On the left is the scene as it would look if lit by a sunlit sky on Earth. Don is making the point that the sunlight on Mars is filtered by the rust-colored dust that's always in the atmosphere of Mars.

The accusation that NASA/JPL deliberately reddens Martian skies derives, I believe, from the very first image from Viking Lander 1 that included the sky. What that image did NOT include was the color reference chart, so the color graders at JPL had to guess. The first-released version had a creamy sky, as I recall. Later, when the color chart was included in some frames, they went back and regraded that first image, and issued a corrected version that was noticeably redder.

In his book "Postcards from Mars," Jim Bell explains all this, explains that the color of Martian skies varies according to how much dust is up there, and settles on "butterscotch" as the color of a "normal" Martian sky when just an average amount of dust is in the atmosphere.

See--NASA is lying!!!!
NASA haters love to show this image, from a press conference at JPL on 10 January 2004. That day, the brand new rover was Spirit, and a frame from Spirit's pancam (designed by Jim Bell, by the way) was back-projected behind the speaker panel. 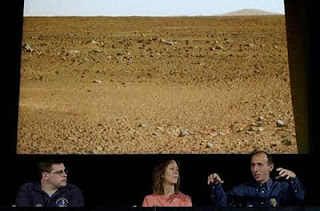 The haters say this absolutely proves the point. But, you see, it doesn't. The fact that there are human faces in front of this frame makes any discussion of color balance on the original useless. The scene was lit by artificial light—most likely fluorescent, that casts a greenish spectrum on everything—and the whole composite picture was color-balanced to make the flesh tones look natural. Basically, this photo may be the only example of a red herring that is actually blue.

Now to the interesting part. Mike Bara, in his latest "Tell the Truth Wednesday" vlog, makes exactly the same mistake. He shows this version of the first frame from InSight: 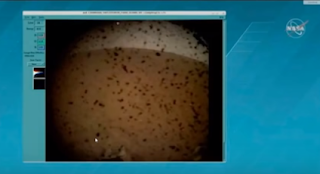 Then he shows us this: 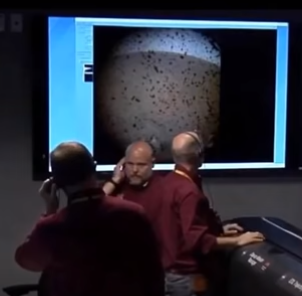 .....but once again, there is human flesh in the foreground, just as there was at the Spirit press conference. This cannot be the truest representation of the Martian sky, for that reason.

Forcing the whites
Bara went on to even more dishonesty and misunderstanding. He shows us this InSight frame, as an example of what he says is NASA flim-flammery. 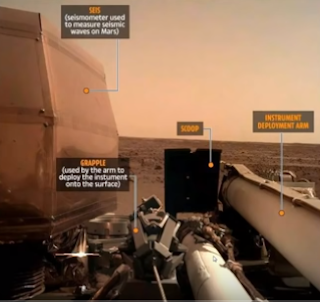 Bara then gets out his favorite image editing software—Microsoft Office Paint, for Gods's sake—and proceeds to show us how he goes about "correcting" JPL's deceptions. He says that Instrument Deployment Arm, over on the right, should be white. The fact that it doesn't appear to be white is proof, to him, that this image is all wrong. So he uses the white balance feature of MS Paint to click on the arm and damn well force it to go white. Behold, the sky goes white too!! 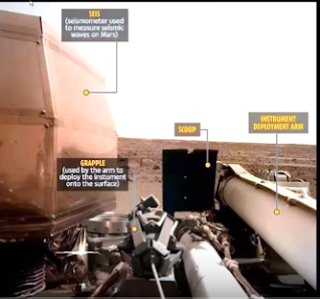 Well, yes, of course it does. But it's this result that's deceptive, not the one Bara showed before he corrupted it with his little MS Paint click-me thingy. He simply doesn't understand the point that Don Davis explained so well—the subjective color of objects is highly influenced by the color of the light that is illuminating them.

It seems obvious to me that the objective of planetary color graders should be to show us, as close as possible, what the scene would look like if we were actually standing there looking at it. And that inevitably means taking into account the color of the ambient light. Mike Bara's white sky is just a ridiculous joke.

Quite apart from all this photographic logic, would somebody please tell me what possible motive NASA/JPL would have for pushing the Martian sky red-wards more than is justified?

Update 20 December: Chris Lawrence reports:
Bara returned to this topic in his "Tell the Truth Wednesday" vlog yesterday. At 15:50, after spending a few minutes calling NASA liars, he popped up an image of Mars. He says:


15:50 "By the way this is the only Hubble image of Mars ever taken, and as you can see from the limb around the planet the sky quite clearly... this is the airglow limb... is blue and not red, in fact the red is grossly exagerrated in this image, and although Mars is kinda red it's not really really super red, so I think we can kinda pretty much settle on that."

The image in question is this one taken by Hubble when Mars was near Opposition in May 2016. Far from being the only image ever taken it's one of many images of Mars taken by Hubble going back to 1991, a year after Hubble launched.

If you click "Fast Facts" on the Mars image you can see details about its construction. It's a colour-composite:

This image is a composite of separate exposures acquired by the WFC3/UVIS instrument. Several filters were used to sample various wavelengths. The color results from assigning different hues (colors) to each monochromatic (grayscale) image associated with an individual filter. In this case, the assigned colors are:

This page explains what you're seeing in these images. Mars' atmosphere does scatter blue light and this gives the blue limb in the composite. Stuart Robbins covered this exact topic in his Exposing Pseudo Astronomy Podcast #113 in June 2014.

Perhaps Bara can move his vlog to the weekend and rebrand it "Making Shit Up Saturday".
at 3:42 PM

Does InSight have a colour reference chart in view of its cameras?

Needless to say, it dun' work, the one in the other thread does.

Anyway, those images from a Viking Lander!!? Of what? What, apart from the colour ref charts and the landscape in the background, are those objects? Did the Viking land behind a Martian neighbourhood refuelling station, or what?

I can see the shadow in the foreground, of what I presume is the lander, but what is casting the shadow over the fuel(?) tank? It appears to be circular, so I guess there mustn't be any ground-based TV signal available in that outback area of Mars, and that's the shadow of an old-school jumbo satellite dish. Maybe it's picking up Earth TV...? What's the scale of those pipes / hoses / cables running across the photo in front of the tank, and what do they carry???

As for your closing question:
"would somebody please tell me what possible motive NASA/JPL would have for pushing the Martian sky red-wards?"

Uhh... Because the Martian sky is red-tinted a lot of the time? I mean, even with the naked eye, from Earth it appears quite red. How long has it been called the Red Planet? What else do we really need to know? Even on Earth, at night, everything looks black or grey. Isn't this exactly the same weird phenomenon?

What I'd like to know is why the big support by the space / science community for the ridiculous notion that Mars could be inhabitable by humans anytime with the next 10 million years? The planet is devastated, effectively, dead, destroyed. It has no magnetosphere, which is probably the number one reason we couldn't live there. It has effectively no atmosphere, nothing to create one (no volcanoes, no photosynthetic plants) and nothing to keep one - i.e. no magnetosphere, and low gravity. It has no discernible vegetation, and about as much water. The idea we could terraform it is just ludicrous. Why don't we start by terraforming the Sahara Desert, or outback Australia, then consider whether it's worth the effort on Mars?

Apologies for that link. I fixed it, and also added 4 words to the end of the piece.

Trekker: I'm sure it does but I can't find pictorial evidence right now.

Hi, thanks for the citations.

An important factor in trying to use a rephotographed view of an image on a screen or projection as an example of color is the 'color temperature' of the projection medium and how when re photographed that becomes exaggerated unless specifically attuned to. As it is the lighting on the news conference presenters is what is being balanced for, letting the background wander as it may in color temperature. Thus a projected color picture of Mars seen that way can have a sky that appears blue even though when there seeing the presentation it was clear to the eye the image was the same as that released. Modern digital projection and monitors generally have a 'blue' color balance compared to daylight settings, In earlier times a projected image would be done with incandescent bulbs and would look very orange if similarly rephotographed.

I decided to do another page on Mars colors summarizing general findings from landers and rovers, and citing relevant papers for all to look up for themselves quantifying the sky and surface color measurements from the surface from three surface missions.

Thanks Don, the new page is excellent.

If anyone wants to play around with making a composite from Hubble data, this site has a tutorial, although unfortunately for Bara it doesn't cover MS Paint.