The short, short life of the EM drive

The EM drive, a.k.a. the Resonant Cavity Thruster, made its début in 2001 as a theoretical design by Roger Shawyer. The device is a closed hollow metal frustrum within which resonant microwaves are generated by a magnetron. The difference between the areas of the two ends of the frustrum, according to the theory, gives rise to a net thrust toward the smaller end, without anything being ejected. So it is potentially a low-thrust rocket engine requiring no fuel. 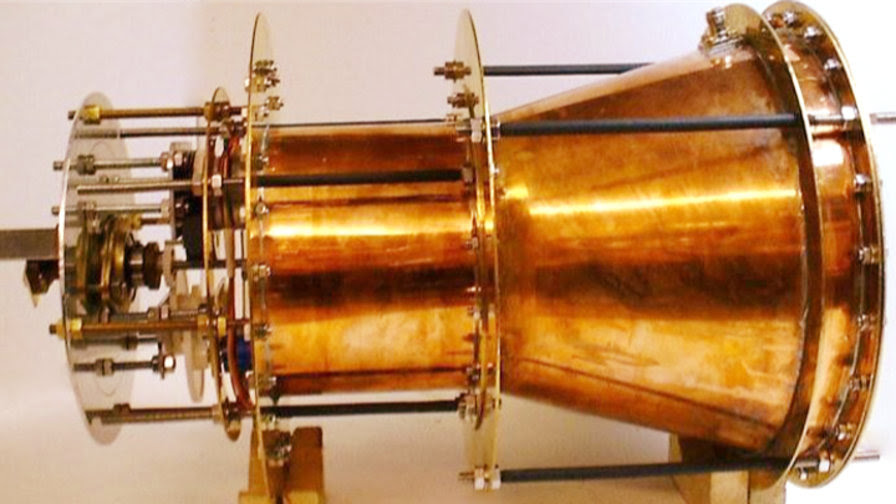 Positive test results from the Northwestern Polytechnical University in Xi'an, China, reported in 2008, were retracted in 2016 as experimental error. Nevertheless some people, including some at NASA's Advanced Propulsion Physics Laboratory, continued to report thrust in the 50 µN range.

At the Technical University of Dresden, Martin Tajmar and G. Fiedler built a version of the EM drive inside a vacuum chamber evacuated to ~10-7 millibars. The device was rigidly attached to a torsion balance whose deflection was measured by a laser interferometer with sufficient sensitivity that a deflection produced by a thrust as low as 1 µN could be measured. Tajmar & Fiedler reported preliminary results at the 51st AIAA/SAE/ASEE Joint Propulsion Conference, AIAA Propulsion and Energy Forum, in 2015. The paper was titled Direct Thrust Measurements of an EMDrive and Evaluation of Possible Side-Effects. From the Abstract:


"[W]e observed thrusts of +/- 20 µN however also in directions that should produce no thrust. ...Our test campaign can not confirm or refute the claims of the EMDrive but intends to independently assess possible side-effects in the measurement methods used so far."

I, and many other commenters, knew there was something very dodgy about the device when we read that the control experiment—a run when the device was rotated so that thrust along its axis could not possibly deflect the torsion balance—produced better "thrust" than when the device was oriented optimally. Well, we knew that already because this thing cannot possibly work as claimed. It violates Newton's third law of motion. As I wrote at that time, if this works then sitting in your car and pushing on the dashboard will work, too.

The kibosh
Now, the Dresden lab has put the almost-final kibosh on the EM thingy. On 16th May, at a Space Propulsion conference in Seville, Spain, they presented The SpaceDrive Project – First Results on EMDrive and Mach-Effect Thrusters by Martin Tajmar, Matthias Kößling, Marcel Weikert and Maxime Monette. Stripped down to telegram length, Tajmar et al. reported that they think they've found the source of the experimental error. They remembered from Electrical Engineering 101 that an electrical conductor carrying current in the presence of a magnetic field experiences a force orthogonal to both the electrical current and the magnetic field. This is the principle that makes my coffee grinder, and your vacuum cleaner, and every other electric motor in the whole world, go round and round.

Is there an electric conductor carrying current in this experiment? Yes, the cable supplying the magnetron, which runs along the torsion arm. Is there a magnetic field present? Yes, the good old field from Mother Earth that makes compasses work. Back-of-an-envelope calculation confirms that forces in the same range as those observed could well be the result of that current (2 amps) and that magnetic field (~48 µTesla at an angle of 70°). Assuming the length of the cable is 15 cm.,

I hope Sarah Knapton enjoyed her breakfast of words a few days ago. She's the Science Editor of the London Daily Telegraph who wrote, on 28th July 2015, 'Impossible' rocket drive works and could get to Moon in four hours.

Physics 1, Mike Bara 0
Knapton isn't the only one eating words. Mike Bara, the world-famous denier of evolution, climate change, and the entirety of physics, loves the EM. So much so that he wrote a section about it in his book about "The Secret Space Program." Strange, because there's nothing secret about the device and its connection to space is limited to extravagant claims. Bara wrote of the original Xi'an announcement "the results were astounding," not realizing that the results had already been retracted. He also wrote that the device falsifies Einsteinian physics, not understanding that it's Newton, not Einstein, whose ideas would have to be wrong if this device works as claimed.

In September 2010, in a promo interview for his appalling book The Choice, Bara said "I’m completely confident that I can prove there’s no such thing as the laws of physics." In the book itself, he wrote (page 67) "most mainstream physicists are blithering idiots." After the 2015 announcement by Tajmar & Fiedler, Bara tweeted  "Aaaaannnddd just like that the "laws" of physics go out the window.."

Look around, Mike. I think you'll find that the laws of physics just flew right back in.

Scott Manley reports on Youtube, with many of the key illustrations and diagrams from the new Dresden paper.

It seems to me that in light of the uncertainty, the baffling variation in experimental results is similar to the unexpected phenomenon which occurs in the Quantum realm. They might actually be on to something.

I'm OK with 20 and 13.52 µN being called "in the same range"—that's no problem. But I don't think we're there yet, for the following reason:

Theadora the whole point is that the results are no longer baffling.

You haven't proven anything, Patrick. NASA is still working on the challenging enigma. Do you really think that know more than NASA? Are you honestly in denial as to the differences between Mechanical Physics and Quantum Physics? Now, granted, you might have the makings of a reasonable hypothesis. What you need to do in order to be relevant, is to design an theoretical experiment which can test your idea, to see if the results will match your prediction.

I'm not going to answer any of those questions.

It's an interesting subject and considerate of you to share it with us, Patrick. You can fairly question the value of the research, but when you jump to unsubstantiated conclusions, and refuse to account for yourself, it might seem as if you beg for readers to illustrate how a sluggardly you can be.

Hey Expat.
Thanks again for a breakdown of complicated (to me) science.

I don't mean to be dumb, just naturally gifted that way, but even if it worked I can't figure out why the EM Drive is such a big deal to everyone...

Supposing the drive actually worked, at 50 micronewtons of thrust wouldn't we need 1000 drives just to lift a teaspoon of sugar?
Obviously we could build bigger drives, but Am I missing something?

Which current are you referring to? The heater / filament current for the magnetron? As I understand it, that's AC, so isn't going to explain this, methinks.

There's also the high voltage supply... The article abstract says it's a standard, commercial 700W magnetron, but doesn't give more info. What I know is that the HV supply is DC, so that is relevant. However, the typical HV supply for a magnetron is around 5kV. Even if we assume only 70% efficiency (seems low - it's gonna get very hot very fast), at 5kV, 1kW will require 0.2 Amps DC. That's an order of magnitude lower than your figure.

But, as I said, it's going to be generating quite a bit of heat. Not sure how that's going to affect things (in a near vacuum) as I don't know the point of suspension, but maybe it's radiant heat effecting the torsion arm...?

I presume the "big end" of the microwave cavity is also closed by a copper sheet? Dunno how that's gonna work. ALL the electrical power being supplied has to end up as heat, if none of the microwaves can escape. (Unless, of course, some of it is being consumed turning the interior to gold plate, right Orbs?)

In reality, there's ~1kW of power being delivered to that contraption. How hot is it gonna be before it reaches thermal equilibrium, and what effects will that have? (BTW, commercial microwave ovens have a fairly powerful fan to cool the magnetron, but this thing can't cool that way, so early failure seems pretty certain.)

Whatever, it's certainly not a "free energy" drive, even it it (impossibly) could push far less than a gnat can lift. You're gonna need a nuclear power plant to get enough drive to go anywhere. Might as well use that to heat the Solar Wind, a la a Crookes Radiometer Drive...

2%-- Now that this comment has been rescued from blogpost comment hell, I can affirm that the 2 amps figure is a direct quote from the Tajmar paper.

I agree about the heat problem.