Aaaaannnddd just like that, Mike Bara's daft ideas go out the window

"I’m completely confident that I can prove there’s no such thing as the laws of physics."

Thus Mike Bara in September 2010, in a promo interview for his appalling book The Choice. Mike never got around to proving that or anything like it. Instead, he reminded us all about such frippery as Kirlian photography, Plant emotions, and the Princeton EGGs, as though they were brand new challenges to mainstream physics. Which they ARE NOT. Neither brand new nor challenges, other than as a sort of parlor game "Spot the logical flaw."

Ever since, Mike has apparently been on the lookout for fresh challenges to physics—without, of course, having the slightest understanding of the subject. Today he latches on to the EM Drive, the "miracle" rocket propulsion system that the Daily Telegraph assures usnote 1 could get to the Moon in four hours. 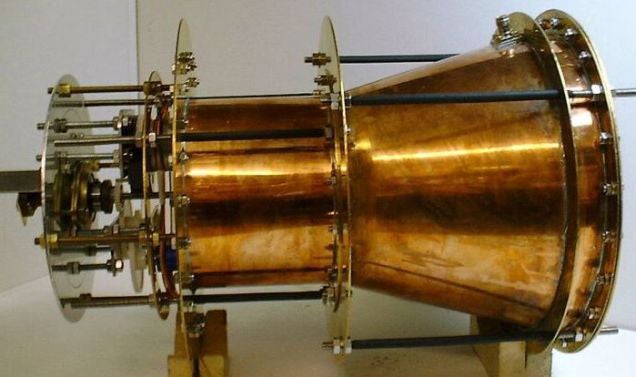 Unfortunately, The Daily Torygraph is not only counting chicks before they hatch but before the eggs have been laid, and possibly before the mother hen herself has cracked out. If this works, then pretty soon sitting in your car and pushing on the dashboard will work, too. As Bob Zimmerman correctly pointed out last night on Coast to Coast AM, the Abstract of the new paper by Tajmar & Fiedler (AIAA/SAE/ASEE Joint Propulsion Conference)note 2 includes these golden words:


"Our test campaign can not confirm or refute the claims of the EMDrive but intends to independently assess possible side-effects in the measurement methods used so far."

The EM Drive "works" by bouncing microwaves around inside a closed chamber. A thrust of around 20 micro-newtons has been observed.note 3 Your computer mouse probably exerts a thrust of around 1 Newton on the desk—it sure ain't going to take you to the Moon any time soon.

Mike Bara's tweetery on the subject was "Aaaaannnddd just like that the "laws" of physics go out the window.." LOL, as they say.

[3] As Exposing Pseudoastronomy points out today, the largest measured thrust was from the control experiment.
No, scientists haven’t invented a space engine that breaks the laws of physics RawStory
at 9:45 AM

Double LOL since the main interest has been via NASA! But when did mike ever read an article to the end? He saw the headline, wet himself and tweeted. He probably thinks that image above the story is this thing in action, humming away with hyperdimensional blue energy.