02:14:00 Gary Leggiere: "One more question. A person named James Concannon wanted to know—I guess expat asked the same question—why did..."
Mike Bara: "I think it's the same person."
Gary Leggiere: "OK. 'Why did he, meaning you Mike, take an LRO image of landslips down the wall of a crater on the Moon, turn it upside down, and claim that it shows jagged crystalline spires. Hidden Agenda, NASA and the Secret Space Program page 117. Isn't that totally dishonest?' I don't know the image, Mike, so that's why I asked you that question."
Mike Bara: "I do know the image in question and the answer to that is that I did not do that."
Gary Leggiere: "Oh, OK. All right. Again I haven't seen it so..."
02:14:58 Mike Bara: "That claim is completely false. I did not do that."

The above exchange occurred on The Martian Revelation, an internet radio show narrowcast live last Saturday night and now archived at Neely Productions.

Now rewind to June last year, to Bara's lecture at Contact in the Desert. Nearly 40 minutes in, Bara showed the image in question. It is part of an oblique strip of crater Marius, processed and released by Arizona State University. 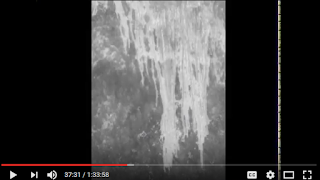 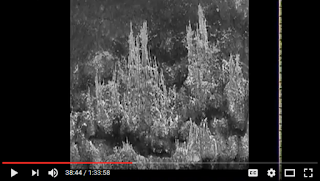 It appeared in Hidden Agenda p. 117, without any indication that it had been flipped, with this caption: 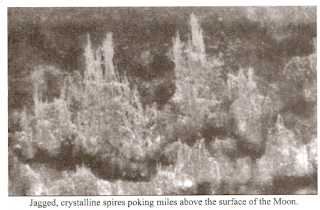 The accompanying text is as follows:

"I believe the Moon, especially the front side, is mostly covered by towering crystalline, glass-like structures which acted as a makeshift meteor shield for the various alien basses [sic] operating on the surface below."

James Concannon adds:
I had a text exchange with Gary "The Mad Martian" Leggiere after I had reviewed his show yesterday. I will not quote from that exchange since it was private, but I think I convinced Gary that  the wool was over his eyes.  Both passages are linked above, so anyone who cannot believe Bara would be so flagrantly dishonest can check for themselves.

I can just imagine the string of "logic" coming up with that.

1. Maybe that NASA image is actually upside down, I mean it's space and who knows which way is up. Crazy place space.
2. Ooo.. ooo.. that means the debris that they say is falling must be something else, something that goes up. You know what goes up, spires.
3. Hmmm... what could spires be used for, erm... I know they're a protective shield of some kind. I don't know how that works, but I'm sure I'll come up with something, maybe it's just a makeshift thing, so not so important how it works.
4. Well, if those spires are a protective shield, they've gotta be protecting something, I mean that's just common sense. So what could those mean old asteroids from hitting.

Congratulations Mr Bara, go to the top of the class.


H: Today we have Mike Bara on the the show, good morning Mike...
MB: Is that a fact, this being a good morning, or are you just parroting the official line here...?
H: Well...I don't know Mike, why don't you tell us..
MB: What I love to do just after I woke up, you know... being brought into a state of awareness or alertness, is to flip my brain upside down. Just because they say that I just woke up does not really mean that I am really shifted into a state of awareness or alertness....What happens when you flip your brain upside down? When you flip your brain upside down it gives you a real view of the world.
H: Really...?
MB: Yes....
H: Fascinating....
MB: I know I am
H: Are you in any way familiar with a condition called narcissism Mike..?
MB: Yes...it is a form of smear tactic invented by the establishment in order to prevent investigators like me to be taken seriously....and...you know...after my morning routine in which I flip my brain upside down...you know...I look fantastic with a crystal clear view of the world.

Isn't Gary supposed to be an expert in forensic imagery? Anyway, in the Southern Hemisphere, they don't see the Man in the Moon, they see the Rabbit in the Moon, because from their angle, it looks upside down from the way it's seen in the North.

Here's the Marius image in context, from the LRO:

Ah, Theo are you insinuating that as two proteges of Richard C. Hoagland that Mike Bara got the picture of stalactites upside down and that Gary Leggiere couldn't tell the difference? Or do you mean that the picture was taken when the Moon was upside down?

Thanks Trekker. Based on that, perhaps the NAC strip that Bara misused isn't oblique but straight down. I makes no dif.

No, all I;m saying, Nimrod, is that maybe when they leaned over the edge to take the snap, that the camera would have had to have been upside down.

There may be no direction in space, but on a world with gravity a hole is a hole, and the walls of a crater still lead you down into it. Turning the photo upside down doesn't stop the crater walls going downhill and doesn't turn the deposits on them into crystal spires pointing upwards.

You do have the propensity to exaggerate, Patrick. Bara did in fact say that he flipped the image upside down from how it was officially released. Not only was he not completely dishonest, he wasn't dishonest, in that regard, at all.

It's not apparent to me which end is up in either case. How can we determine context from the image itself?

When one is to say that the Face on Mars at Cydonia, is merely the result of a natural tendency for the human brain to subconsciously attempt to recognize familiar patterns in order to maintain organizational stability, how can looking at a picture, supposedly of the Moon, be any different?

On the other hand, if you're so sure that it really is a picture of a crater on the Moon, than why can't we be just as certain that the Face at Cydonia isn't an ET artifact?

« Not only was he not completely dishonest, he wasn't dishonest, in that regard, at all. »

«It's not apparent to me which end is up in either case. How can we determine context from the image itself? »

From the geometry of the crater. Look at the entire NAC strip, not just the headline cropped image.