Conspiracy theorists are fond of explaining to us all that nothing the US Government promulgates is true. The advantage of that belief is that it enables the believer to insist that secret things exist for which there is no evidence whatever. Michael Salla, for instance, claims that a select group of high US officials has regular diplomatic contact with extraterrestrials. We don't hear about it because it's classified—in which case, I have to wonder how Salla knows about it.

As a self-described "born again conspiracy theorist," Mike Bara is, of course, no exception.The sub-title of his 2016 book Hidden Agenda was "NASA and the Secret Space Program." And just like other authors on the same topic, Bara has a prima facie credibility problem. Everybody knows that spaceflight makes a lot of noise and involves thousands of engineers and managers—so how could a whole segment of it be kept out of sight? Bara attempts to demonstrate that the SSP must exist by a piece of pseudo-logic that reveals how his tricky mind works. On page 147 of the book he displays this diagram: 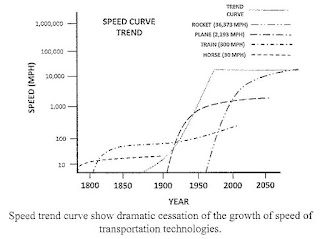 The accompanying text reads, in part:


"For almost 2000 years, the fastest things on the planet were carts hauled by beasts of burden. Then in very rapid succession you go from the horse and buggy to the steam train, the automobile, the propellor airplane, the jet engine, and then by 1960, you have the chemical rocket.
But then suddenly, it cuts off and flatlines.If you believe what the military guys are telling us, there hasn't been a single breakthrough in propulsion in almost 60 years.... That's basically impossible.... There should have been another major propulsion breakthrough that took us to the next level—the flying saucer level—decades ago.
So if you look at this graph, the odds are that there had to be a breakthrough of some kind in the last 50 years. But if that's true, where is it? The answer is that it's been hidden."

I have several problems with that thesis. First, the "trend curve" he has drawn, starting from zero around the year 1875 and abruptly flattening in the 1950s, is not a fair representation of the trend at all. In reality, the trend is stepwise: trains exceed horses in 1810, planes exceed trains in 1920, rockets exceed planes around 2000. There's nothing there that says we ought to have a whole new technology of transport by today.

Secondly, there's absolutely no reason to assume that transportation speed should keep on increasing for ever. Plenty of phenomena have natural asymptotic limits, and fundamental limitations apply to transport just as to other areas of human endeavor. One is the marginal cost of increasing power beyond a certain limit, and another is the tolerance of the human body for g-forces.

Orbital velocity
The vast majority of space missions go no further than Earth orbit. For those missions, an excess of speed is just as bad as a deficit. The velocity in a circular orbit is given by the formula v = √GM/r, where G is the gravitational constant, M is the mass of the Earth, and r is the radius of the orbit. A more complex formula is needed to describe the more general elliptical orbit, but it remains true that average orbital velocity is inversely proportional to the square root of the semi-major axis, and independent of the mass of the spacecraft. That's why a visiting Soyuz capsule has no problem keeping station with, and eventually docking with, the far larger mass of the ISS.

To strip that down to its essentials, if you want to send a spacecraft into an orbit of a given radius, you are obliged to have it arrive there at a certain velocity. 7 km/sec gets you low Earth orbit: The ISS orbits at roughly 5 km/sec at an altitude of 400km, and at geosynchronous altitude 3 km/sec is all you need (but you have to get there first.) So to expect rocket speeds to keep growing over time is to expect something that's irrelevant for the vast majority of missions.

So has rocket technology got stuck in the state it was in 50-60 years ago, as Bara implies? Not at all—but the improvement has been in thrust, not speed as such. This is hardly surprising, since the primary demand is to lift more and more mass into orbit, and nobody cares how long it takes to get there. The blogspot editor is not too good at tabulation, but here's the best I can do for the progression from 1958 to the present day:

Interplanetary flight
For trips to Mars and beyond, more speed obviously means shorter journey times, so there is indeed an impetus to develop faster rocketry. But it's a complicated calculation, since every increase of a km/sec at the start of a flight is a km/sec you're going to have to lose once you get there. The New Horizons explorer, launched on an Atlas V, went all the way to Pluto but was going so fast that dropping it into orbit was impossible.

For a manned mission to Mars, round-trip time  is a vitally important consideration, since radiation dosage is directly proportional to exposure time. With current rocket technology, 500 days is about the best we could do, but that needs to improve. NASA's Innovative Advanced Concepts program (NAIC) is now working on a reference mission that lasts a total of 210 days — 83 days for the flight out, 30 days on the Red Planet's surface and a 97-day journey back to Earth.

The technology needed to achieve that isn't here yet, but when experimental nuclear rocketry comes of age, perhaps around 2030, Mike Bara may find he has to redraw his speed diagram.

We've all see UFOs, changing course at high rates of speed. That doesn't necessarily mean that they are ET or alien technologies, or Space NAZIs either, but if the US Government doesn't know precisely what they are, then we are all in deep, green cheese. I sure as shit hope that they are ours.

A similar analogy would be the speed of an ocean liner, which hasn't increased much in 100 years. I don't think a modern cruise liner can go much faster than the Titanic at full speed. There are natural barriers to speed on the water - in this case water resistance is the limiting factor. I wonder if Mike thought of ships when putting his chart together. Somehow I don't think so.

His curve for the rocket is ridiculously badly drawn. It shows orbital speed reached in about 2050, while it was actually reached by Yuri Gagarin in 1961

David: Yes, there are a number of anachronisms in that diagram. I wasn't even going to get into that. Thanks for your comment.

Grouping horses in with rockets under the banner of "transportation technologies" might be interesting, but then trying to extrapolate a growth trend from them is arbitrary nonsense. Bara lacks the discipline to understand that.

Not content with showing his stupidity to all, he compounds it by claiming that a lack of a transportation breakthrough means that there has been one and it's been hidden. Genius. That takes a special level of stupid. Perhaps this is how he convinces himself he has scores of women admirers - look at them all, hidden!