The volcanoes of Io: No joy for Richard Hoagland there either

Io [pron: EYE-o] is a moon of Jupiter, just a little bigger than our own Moon (mean radius 1822 km, cf.1737 km.) Io's orbit is somewhat eccentric (.0041), and this is enough to cause continual flexing in the colossal gravitational field of Jupiter. The heat this generates has created over 400 active volcanoes, making little old Io the most volcanically active object in the solar system.

On Monday, Space.com reported on some exquisite work by Katherine de Kleer and Imke de Pater of UC Berkeley, tracking volcanic hotspots on Io over more than two years, from 2013 to 2015. The astronomers used two of the world's largest telescopes, the 10-meter Keck II and 8-meter Gemini North, both located on Mauna Kea. The work produced this stunning image: 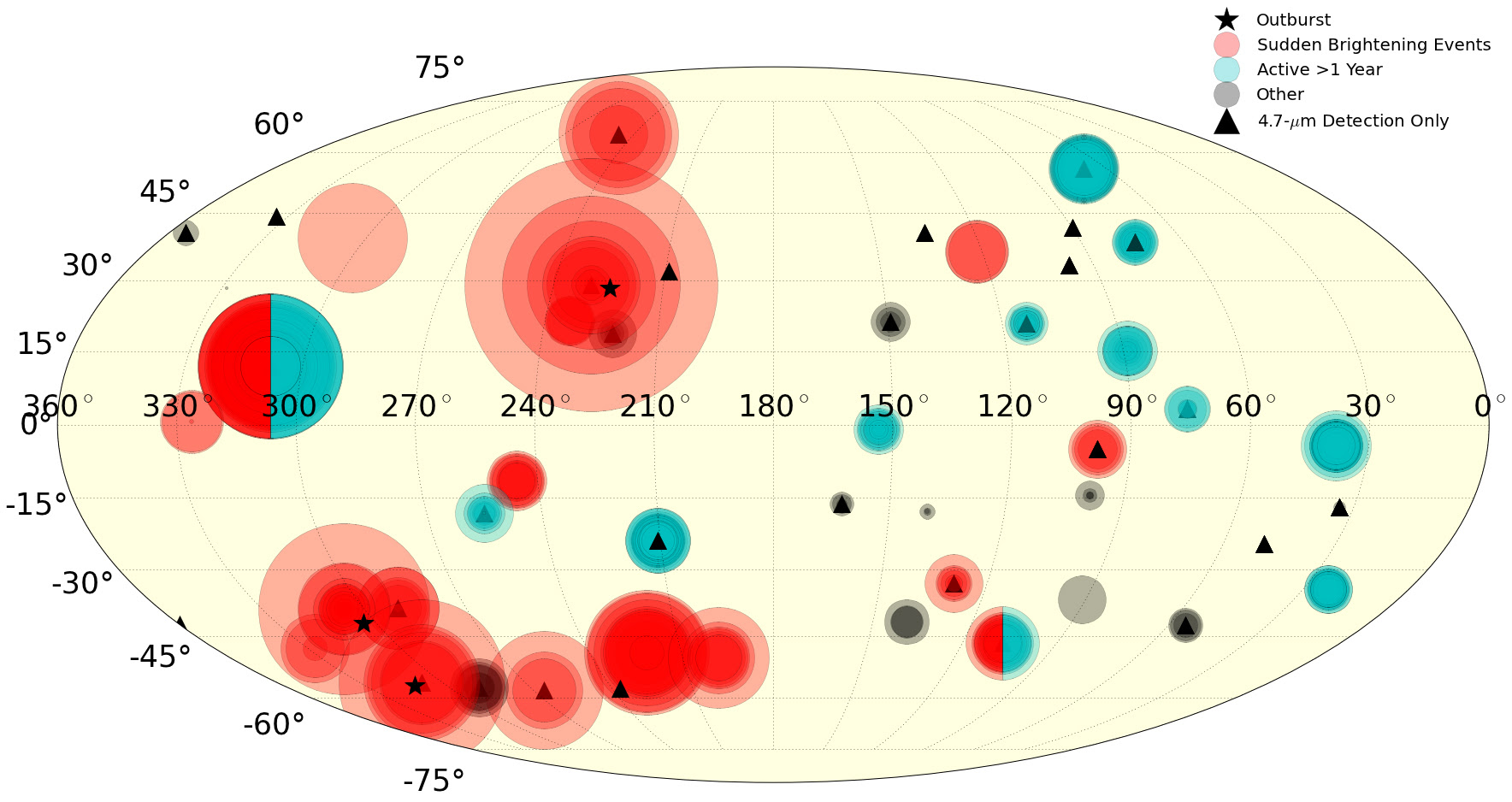 The hotties aren't identified by name, but I bet that biggie is Amirani, at 24.46°N.   A 2001 JPL/Caltech report wrote that Amirani "is responsible for the largest active lava flow in the entire Solar System, with recent flows dwarfing those of even other volcanos on Io."

Too bad for Richard Hoagland,note 1 who regularly includes Io in his erroneous list of solar system objects that support his claim that excess "hyperdimensional" energy is available at 19.5° latitudes on a spinning spheroid. The list is Table 1 of Hoagland's web page The Message of Cydonia, including the Io volcanoes Loki, Maui, Pele and Volund. He says that Loki, Maui and Pele are all at 19°, while Volund is at 22°. In fact the latitudes are 18.22°N, 19.53°N, 18.71°S and 28.62°N respectively.note 2 So he gets one right, but this recent work from UC Berkeley puts paid to any idea that the 19.5° latitudes are volcanically special. The Keck observatory happens to be quite close to latitude 19.5°N, but that's no help. Note, too, the biggest volcanic events in Earth's known history:note 3


None of the top ten earthquakes in Earth's known history has been at 19.5° either. So much for hyperdimensional energy upwellings.

Behind the Black
I would never have noticed this brilliant report if I wasn't a regular reader of Bob Zimmerman's blog Behind the Black. Zimmermannote 4 always keeps it concise and accurate. He's solid on spaceflight history (author of Genesis:The Story of Apollo 8) and he knows more about the commercial space industry than anyone I know. Bob was nominated Science Adviser of Coast to Coast AM after Richard Hoagland drastically overplayed his hand in July 2015.

There are nearly three and a half million submarine volcanoes, with about eighty percent of them currently erupting. They can't all be at 19.5.

The ones at 19.5 are they only ones that count. The rest were created by the spillage of all that HD energy. After all,l "there is no such thing as an exact science."*

*yes, Hoagland actually said that once.

Hello Other Side Of Midnight Community! Sorry it's been so long since our last update. We are still working on... http://fb.me/uwv4y3k3
0 replies 0 retweets 0 likes

@OtherSideOfMid Told you so. Why did you delete this preDICKedtion from the Enterprise facebutt page?
12:19 PM - 13 Nov 2016