From the book and the chirp yesterday:


"There is no 'collapse' going on in Iraq. All of this stuff you are reading about took place over a week ago. It is all being staged to keep certain corrupt people in their positions. The news is being manufactured."

I believe the ISIL fighters are less than 100 km from Baghdad as we speak.

Scientists 3, Laid-off CAD technicians 0
Meanwhile, back at science, Bara's blog is insisting that he and Hoagland have been right all along about the "glass tubes" on Mars. His gigantic arrogance blinds him to the fact that several people with infinitely more expertise than him have shot this one down.

Dave Pieri, for one, who is as qualified as anyone in the world, commented 13 years ago, arguing that the tunnels were actually gullies, the terrain reversal being a well-known illusion. Lori Fenton, who Mike refers to as "some kind of low-level research scientist somewhere," also blogged about this recently. Lori is a senior research scientist at the SETI Institute. Her recent publications include:

What has Mike Bara contributed to our knowledge of these phenomena? NOTHING. I don't count his testy, ego-driven bloggery.

Finally, Bara hates Dr Phil Plait (who he calls "Dr. Phil" Plait) so much that he totally missed this excellent image from Plait's original refutation of Hoagland. See all those "glass tubes"? They're dune trains. Unmistakably. (more details here.) 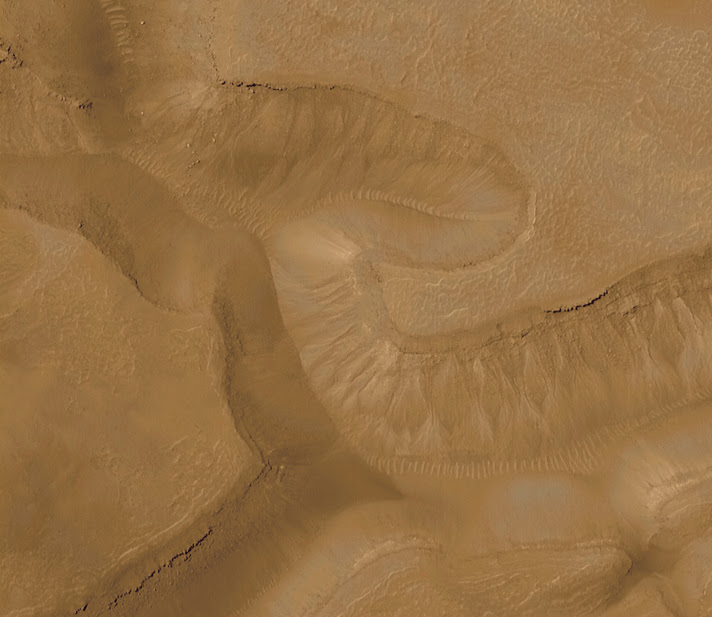 The glass tube thing has been so completely refuted, that the argument is almost boring by now. As you pointed out, Plait had this one covered years ago, and no new evidence points in any other direction. It's just Bara's (by way of Hoagland) insistence on sticking with the narrative that keeps the issue in play. Nothing that a so-called low level research scientist (as opposed to a low level cad/cam operator) could say will convince him that he is wrong.

P.S. Plait's old Bad Astronomy website was what set me on the path of skepticism when it came to Hoagland. While his Hoagland stuff doesn't have quite the scope of some places (including this blog), it's a nice primer for those just getting into the subject.

I suppose it's a matter of perspective, but I always have difficulty with the concave/convex thing. Is there any foolproof way of seeing these things the right way round(convex or concave?

See the dome/crater example at Phil Plait. The trick is to arrange it so that the light is coming from the top.

The dome/crater is fine - I can see that, but the 'worm' right way up, and the worm inverted look the same to me. I'll keep trying!

The insidious thing about it is that once the idea is planted in your mind, it's very hard not to see it as a tube. The mind loves to create its own reality.

To me the interesting thing from Bara's blog is how he doesn't appear to realize how he's now discrediting his own line of reasoning by (tactilely) admitting the features on Fenton's example image are actually looking pretty much like sand dunes, whatever would be "underneath" it.

Lets go back to his earlier writing at TEM in May(?) 2000: A Sampling of Curious Features From the Mars Data Dump - page 5: "nothing less than a series of interlocking, reinforced and still intact translucent, glass-like tubes!". Note that no claim of any underlying hidden tubes is being made here, otherwise, why use the word [i]glass[/i]?

Any "sand dune" theory is here discredited by Bara/TEM because sand dunes appear to be "irregularly spaced, vary in length" and "are not paralell [sic] to each other".

But Lori's example shows now very clearly how sand dunes on Mars can indeed be quite strongly regularly spaced and sized, and also can be placed quite parallel to each other.

Scientific and all reasonable thinking would suggest that if you find one "white crow", it would mean that white crows might be a regular occurrence after all. And there's no need to suggest any artificially colored births or drones. And this is why Lori does not have to have HiRES imagery of that one particular location which shows similar features. But because it's not there, the theory might just not die an easy death, it cannot be let go!

And even if such data would appear, we can always fall back on data manipulation theories or other goalpost-moving theories of course.

Yes, on that web page he shows an example of unevenly-spaced dunes on Mars and clearly assumes that all dunes must be unevenly-spaced. For the evenly-spaced ones, he writes "To try and explain away such unique and obviously non-geologic objects as the products of mere wind erosion is laughable."

It's even worse, expat. The real discovery here would be the increasingly obvious presence of all these concave, winding, depressions in the surface indicating ancients flows (of water?). This perspective would also blow any criticism of "magical winds" like Ron Nicks attempted at TEM out of the, uh-mm, water! And those "magical" winds would just follow the gullies, creating those neat dune trains. And yes, Plait wrote already the same thing years ago, of course.

So by going with "convex" and "glass like", the really amazing properties are being obscured and instead we are stuck with the vague idea of some structural artifact with no good working theory on what it is, was or is supposed to be doing there. And it becomes a "show stopper", a theory to prevent further scientific inquiry simply because there's no real theory to connect these "glass tunnels" with suggest a next experiment. And while it's fine to entertain wild ideas to inspire further research, it's really sad when people refuse to let them go again when more damning evidence becomes available. There's no shame in that, I'm sure we all had to let go of one conviction or another at some point.

Bara: "I'd also love to see the explanation for "sand dunes" that connect with support struts at 90 degree angles to the "dunes".

By the way, I'd love to see those struts and (I suppose repeated) 90 degrees connections and their relation to any supposed plane. But there are not happening in my imagination yet. Anyone has any clue what this is about?

It must be about Mike's imagination. There are no 90° angles there.