I deliberately did not clean my scanner glass before scanning this image. I even made sure a stray human hair was around: 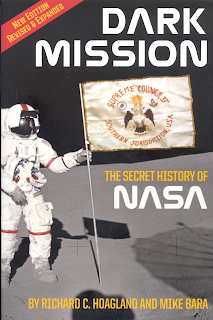 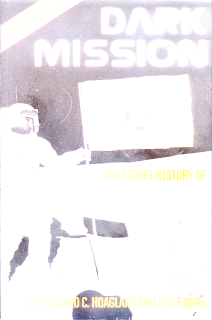 My scanner glass is a lot cleaner than Hoagland's (we haven't had any office parties lately,) but the effect is nevertheless clear. Smears and sparkles are picked up wherever the image is black. The resemblance to this, which Hoagland & Bara swear shows Al Bean under a glass dome, is fairly striking. 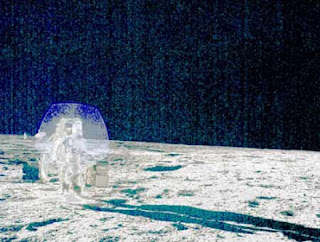 Again, scanner sparkle in the blacks, including Al Bean's shadow. This is another of Hoagland's scans from the Ken Johnston collection, and he's never explained why there's "glass dome" material down there on the surface.


Retouching
Here's what I think accounts for the accusations we hear about NASA "airbrushing" Hasselblad frames for release. I think it's well-nigh impossible to eliminate the sparkle altogether, on something as absolute black as the lunar sky. So I think some sparkle quite likely was removed. If working on a print, the tool was more probably a black felt pen rather than an airbrush, but the purpose was the same—to give a truer rendering than the printing process provided. And, once again, this could not have been done on a negative, as Mike Bara has alleged. That would mean eliminating black spots instead of white ones, and turning them transparent. Impossible, basically.
at 2:48 PM

This page includes some discussion of the problem, and provides very clear examples of film-winding tracks.

I always thought the fact that the "buttresses" could also be found in the shadows in those pictures was a major (and obvious) flaw in that particular line of evidence. Unfortunately, neither Bars nor Hoagland is ever likely to address the issue, as it is unlikely to come up on either C2C or the brain dead conferences they get invited to.

Great job. It's a bit like shooting fish in a barrel for you I know, but nevertheless I appreciate your efforts to document the sorted business. With apologies to PKD, I think the post might be better titled, "A Scanner Dorkly". You have to give Hoagland some sort of credit for being able to get so much mileage from scanner artifacts. Imagine what he could come up with if he worked at Kinkos? It rivals David Serada extrapolating a entirely new physics from watching the Shuttle "tether" footage. Just thinking about Serada's "cosmic clock" explanation brings a smile to my face.

Oh, Hoagland's connected his own physics to the tethered satellite on STS-75, don't worry. It's in keeping with his "and the kitchen sink" philosophy for staying relevant. On May 15, 2004 Hoagland said on Coast to Coast that the anomaly on that mission where the satellite was lost was the result of a power surge between the two spacecraft caused by HD physics. Drama queen that he is, he played it up a good deal. "The truth is, George, they almost lost it" (the shuttle).

I have no barely time to comment, but I'm closely, as always. magnificent posts, Expat. By the way, yesterday was the 81st birthday of a great sci - fiction musician, from of truth,from good, which is assumed to be "false", in order to be more present and real between us than reality itself. Happy Birthday, John Williams.https://www.youtube.com/watch?feature=player_embedded&v=lk5_OSsawz4

Update: I re-scanned the book cover, this time with a human hair (mine) artfully placed in the black area. Rather similar to what Mike Bara says is an artificial tower, don't you think?

As very many years in the darkroom have proved to me, it is indeed well-nigh impossible to remove 'speckles' (i.e. black-spots on a negative) without leaving other non-transparent or refractive artifacts. Even localised bleaching still leaves a shade behind.
- F.C. Trevor Gale.

I know it's probably been suggested and answered before, but has the publisher of Bara-land's fiction been asked to submit both (or Bara and Hoagland directly)'experts' to a radio debate (or even TV-but that would be a stretch I think) on their collective 'scientific findings' with a couple of real physicists/scientists? Done properly with an impartial chairman, and dispassionate, on- air experimentations to reproduce with real world scanners/photoshop etc the things that RCH and Bara say are evidence of real buildings and structures. I wonder if either men would agree to it...probably more chance of Wilcock admitting that Nibiru doesn't exist.

AFAIK publishers have not been approached, and they probably aren't the appropriate sponsors anyway. Adrienne Loska, as MB's manager, has however been asked to arrange such a debate by Derek Eunson (comments here as binaryspellbook). No response.

Stuart Robbins has shown interest in guesting on C2C, and although he hasn't specifically suggested a debate format I think he'd go for it if the ground rules were reasonable. He usually reads these comments so he'll pipe up if I'm wrong.

I'd love to see it happen. OH YES.

Anybody got any ideas about how to reproduce the "glass skyscrapers" more faithfully? It looks as though something tacky was stuck to the glass in two oblique streaks, then completely smeared as a book or document was slid off the scanner.

Any possibility that the gunk is on the prints themselves, rather than Hoagland's scanner? Maybe a couple of fingerprints on Johnston's prints that got smeared over multiple times sliding them in and out of the albums? If he had them for as long as he claims, a lot of crap can build up over a couple of decades.

Against that is Hoagland's specific text, saying that the scanner could see what the human eye could not.

The semi-transparent columns always looked like scotch tape marks to me. Either it was on the scanner bed (from holding a previous photo in place), or it was on the photo itself (from previous handling, as jourget suggests).

An intriguing idea. Now, do I risk ruining my scanner glass by trying it?

That's the thing. Once those marks get on there, it's almost impossible to get them off without scratching the glass. Maybe you can find a cheap used (as in old) scanner to try it out on.

Re: risking your scanner glass..MOST tape adhesive can be removed with alcohol/meths...avoid white spirit, it's too greasy..At a push you can use lighter fluid. Any stubborn bits can be scraped off with a credit card edge. I clean my scanner glass with spray glass cleaner that contains vinegar.. But even that can sometimes leave smears..As said before, normal (if clumsy) hndling of prints/negs and scanner glass can fetch up a load of smears, smudges and greasy marks from fingers.
YP

Has Hoagland's "Shard" been found? youTube user 1967sander seems to have tracked it down in the LROC browser. Thoughts?
http://www.youtube.com/watch?v=BvGa1w3kylo

Good fun, 1967sander. My only problem is the shadow angle. The shard shadow suggests sun at 11 o'clock, but if you look at other craters within the frame it's more like 9 o'clock.

"His "sharpening" process is useless, I'm afraid. We're just seeing pixels." He claims his special software and years of experience give him an ability to extract extraordinary amounts of information from these photographs, but his examples always leave me thinking he has overextended his reach by a scooch.