When, last week, I was looking for the quote I used in Glass, steel, water, and the art of the misquote, I re-read chapter 4 of Dark Mission.

It's fairly obvious that Hoagland was the principal author, and this is the chapter in which he lays out his thesis that artificial structures are common on the Moon, and they can be seen in certain images in the Apollo (and other lunar mission) archives "after digital enhancement." 66 pages (plus 45 figures) recycled by Mike Bara five years later to make a large part of his own book Ancient Aliens on the Moon.

On page 214 et seq. Hoagland tells how Ken Johnston approached him after a lecture in Seattle, 2nd May 1995. As this blog has related more than once, Johnston, as a Brown-Root employee, was at one time responsible for an archive of Apollo 10x8 photo-prints kept in the Lunar Receiving Laboratory, separate from the main photo-archive that was in a different building, under different curatorship. It was scans of some of those prints, done by Hoagland himself, that underpin the entire Hoagland/Bara lunar structure thesis, if such a shaky set of fantasies may be called such. On page 226, I found this passage:


"In scanning Ken's priceless Apollo 14 C-prints, [I'd] discovered that the computer could "see" what the human eye could not—incredible geometric detail in the pitch black areas, like the lunar sky. The sensitivity of modern CCD imaging technology, in even commercially-available image scanners, coupled with the amazing enhancement capabilities of state-of-the-art commercial software—like Adobe's Photoshop—allowed the invisible detail buried in these supposedly black layers, of these thirty-year-old emulsions, to ultimately be revealed—a "democratization" of technology that no censor at NASA could have possibly foreseen over more than thirty years."


I giggled a bit when I transcribed those words "incredible geometric detail," because incredible is precisely what the detail is. Of course an image scanner can't see what isn't there—that's ridiculous. Unbelievably, those bozos Hoagland & Bara fail to realize that THEY ADDED SOMETHING in order to make the so-called "detail" appear. What did they add? Whatever crud was on their scanner glass, that's what. Hoagland's scanner looks like there may have been hijinks during an office party. 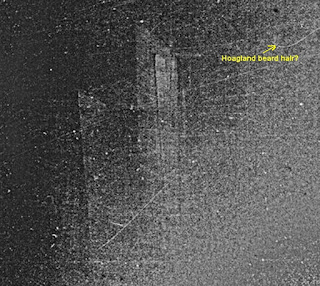 
I challenge
Here's the challenge. Richard Hoagland, Mike Bara — I challenge you to get that print of AS10-32-4820.jpg back from Ken Johnston and scan it again. I guarantee your "glass skyscrapers" won't be there.

Anybody reading this who has the ear of Hoagland or Bara, please pass this on. I don't think they read my e-mails these days.
at 3:25 PM

Do you see the same anomalies?

Do you see the same things that Richard Hoagland sees?

KJ: The more and more I've been exposed to looking at the data, and realizing - actually without the aid of any kind of instrumentation, you can actually see some of the anomalies on just the raw film and pictures itself.

One of the most striking things I have found, and one of the comments that one of the analysts was making is - if you really want to see what somebody doesn't want you to see on the Moon, look in the visor of the person being photographed.

And it was a rather unique experience. We started looking at that, with magnifying glasses and looking at the reflections on the curvature of the face masks of the astronauts on the lunar surface.

And there's some rather striking pictures that show what appears to be constructed structures, ladders, portals; some very, very interesting things in the visor in a number of pictures.

So, the answer is yes, there are definitely things you can see with the naked eye. And then when you start getting some of the enhancement and techniques that Alex Cook had done - just a young man on his own, in a darkroom working by himself...

The real question is: 'how in the hell were the photographic cameras and film able to function in the sub zero temperatures on the Moon? Or: 'does the Moon have an atmosphere with an above freezing climate?' Answer that before discussing the veracity of otherwise dubious images.

...and from the second half-hour:

RH Anyway, so, we put these photos under the optical scanner, and used the computer algorithms that we've been working with now for several years.

And the most amazing geometric patterns come out of this haze.

Because, what the computer is able to do - because it's sensing grey levels and light levels, below the human ability to detect.

RH: It is - the technology is better than the natural human eye. That's what technology does. It amplifies human senses. So, what we're doing, is simply amplifying information that's already there - and making it blatant.

>>'how in the hell were the photographic cameras and film able to function in the sub zero temperatures on the Moon?<<

I already gave you a page on that. Review the archive, please.

I love the "and used the computer algorithms we've been working with now for several years" part. It makes it sound like he's designed his own image algorithms, instead of just clicking on Photoshop. Hoagie just can't resist trying to sound more knowledgeable than he is.

Absolutely right. There's not a show that goes by that he doesn't use a "science-y" word incorrectly in some context or another. It's one of my favorite things to look for. He's pretty damn slick a lot of the time in squirming away from answering questions he doesn't know, but you can tell that a lot of the time he's skating on (or past) the edge of his own ignorance, knowing George won't challenge him.

The bone jarring reality that fans of ancient alien garbage on the Moon refuse to face is simply this. The Moon is the most highly observed and documented planetary body in existence. Study of the Moon has been intense and ongoing by both professionals and amateurs since the 1600's and arguably before then. IF any of these ridiculous claims or structures on the Moon had any validity whatsoever they would have vindicated and used to sell papers and adverstising. Bizarre claims about structures on the Moon is nothing new. As optics have improved the claims of "pipes", "lattice work", "ladders", "X-drones", and other structures have proven to be misinterpretations, artifacts, and optical illusions. At least that is the case for every single one of these things I have looked into personally. You can only remain a "true believer" by sheer force of willful ignorance. People who are interested in Moon
"anomalies" would be well served research the history of these things outside of sensationalist pseudo-scientific conspiracy publications. When you do, it becomes pretty apparent are the opportunistic confidence men exploiting public ignorance and who isn't. Hint, it is not NASA.

Misti, a vacuum is a good insulator, e.g. the Thermos bottle. Why would a camera suddenly become cold on the moon?

Here's a great example of lunar pareidolia. See the Tardis in the picture? If that was real, every amateur astronomer in the world would be able to see it and it would be headlines in every tabloid the next day. Hell, NASA would be forced into launching a probe to investigate.
http://www.youtube.com/watch?v=iwT5A2cPlsQ
Since none of that has happened, we can conclude that it's a shadow of a large crater and go back to sleep.

@Misti
I believe this is the link Expat is referring to about heat and cameras.
http://www.clavius.org/envheat.html
You can rest assured that the nice folks at Hasselblad knew about the physics of the lunar surface and designed their cameras accordingly.