Kerry Cassidy definitely seems to have a soft spot for the convicted murderer Mark Richards. She has undertaken the 300-mile round trip from her home near Malibu to Vacaville eleven times to interview Richards at length. Richards is 66, Cassidy is 60-ish, and they're both reasonably well preserved, so it's perhaps not surprising that there's some mutual attraction—however, rumour-mongers who hint that Kerry's visits may be "conjugal" are undoubtedly fantasizing. A California State prison visiting room is no place for hanky-panky.

Last Sunday Kerry gave Richards a platform for a complaint he has about attacks on him and his family by "a group of internet thugs," in the form of An Open Letter to the Modern Judas. Throughout this 4-page anti-panegyric, names of those he accuses of betraying him are redacted.


"Horrid, weak, evil people like [REDACTED]—who are incapable of doing anything good or creative so they feed off ruining anyone who isn't as limited as they are—move through the history of our world like a poison. People like [REDACTED] who claimed to be 'friends' at one time ... have time and time again been talked into cutting the throat of someone who showed them nothing but kindness. ... They either let an agent of evil, like [REDACTED] convince them that betrayal is justified, or they tell themselves that there is a legitimate reason for them to turn on their friend."

The problem with this editing (done, he writes, so as not to give any publicity to the attackers) is that as a reader I can't make any assessment of Richards' complaints. He neither identifies those he calls thugs, nor gives us any information about the content of their attacks, still less provides any documentary proof that the attacks are false. In default, I bear in mind that:

A Murder in Camelot
It's hard to guess exactly what all of the redacted names in Richards' open letter might be. One might be Richard Dolan, perhaps, who, as I noted a year ago, called Richards "a deeply, deeply, dangerous, disturbed and sick man." That was in a preview of a documentary video by Kevin Moore. Moore has had his problems, but he now says that his video will be out this coming December. A trailer is available. 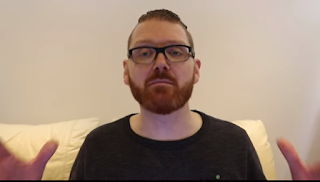 It's perhaps tempting to think Kevin Moore himself might be one of the redacteds. However, it's fairly plain that Richards is complaining of people who were on his side at one time. That does not describe Kevin Moore—far from it. Perhaps, however, he's the "agent of evil" who convinces the Judases that betrayal is justified.

My opinion? I think Kerry Cassidy ought to have better things to do than hero-worship a murderer, a boastful self-promoter and a liar.

Maybe Mark was part of the 20 and back program. He could defend earth and still make it back in time to commit the murder. Those devious illuminati blue avians.

If I'm not mistaken, that's pretty much her mission statement.

Seriously. With that attitude, I can see why a certain someone has never been invited to fly on a "starship enterprise type vessel" by NASA.

Also, if we have "starship enterprise type vessels", then why is my cable bill so can high.