Yes, Mike Bara, you are crazy

The latest evidence of Bara's craziness, ignorance and insensitivity is the utterly nauseating theory that the crew of Space Shuttle Challenger all survived on 28 January 1986, but for unexplained reasons their survival was covered up and they now have new lives. Ugh. I'm not even going to re-post the pictures that are alleged to show them as they are today, this is such a trashy idea.

Bara bases this theory—not his own idea, by the waynote 1—on the fact that on CBS video a parachute was seen floating toward the ocean very soon after the spacecraft broke up. 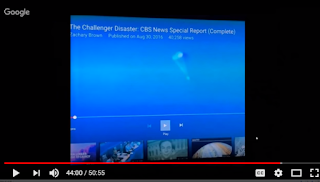 He says he believes Challenger had an undeclared back-up escape system, and that the parachute was in fact carrying the entire crew cabin safely Earthwards.

Well, he was dead wrong about the cause of the Columbia diasaster, and he's dead wrong about this as well. Set aside, if you like, the ridiculous ideas that NASA would a) Not come clean about the crew escape systems that had been the subject of so much debate in the technical press, and b) Fail to report that the crew were alive. Set aside, if you like, the public funerals of the crew. The fact is, we know what that parachute was carrying and why, and it was definitely not the cabin.

Nose cap
The two solid rocket boosters (SRBs), designed for reuse and to prevent major damage after they have flamed out and separated, were equipped with a parachute system to slow the rate of descent. At an altitude of about 15,400 feet, a barometric pressure sensor fired three small thrusters that ejected the nose cap of the booster. The nose cap itself floated back to Earth on a small drogue parachute, and what was seen on the CBS video was the nose cap of the right-hand SRB.note 2 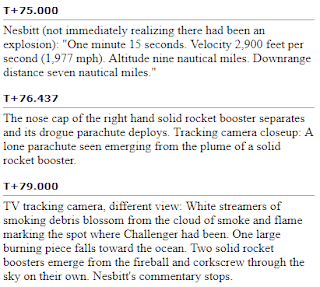 There's another technical consideration, too. It's unthinkable that something as massive as the fully-occupied Shuttle crew cabin could be controlled by a single small parachute. I doubt if anyone ever calculated the mass of that assembly, since it was never designed to be a separate object, but it must surely be many times the mass of the Apollo Command Module, which required three very large 'chutes to bring it home.note 3 Bara claims expertise in aeronautics and he should know these things.

These days Bara is describing himself as "a space expert." When I was active in the spaceflight specialist press, space experts actually knew their facts.

....and by the way, Mister Space Expert, the mission was not designated STS-25 as you said in your ridiculous vlog. It was STS-51-L.

Thanks again to Chris Lawrence for monitoring

Thankyou for covering this, even for a dunce like Bara it's quite contemptible.

Snopes debunked this a few years ago, in a very detailed article. https://www.snopes.com/fact-check/false-crew-members-of-1986-space-shuttle-challenger-are-still-alive/

Thanks trekker. I wasn't willing to get into that aspect of it, so it's a good thing snopes did it for me.

A friend of mine who was an air gun aficionado, was watching the televised launch from the counter of of a greasy spoon. He noticed the gas leak, and said out loud, "It's going to blow!"

I am just going to say that it is known that people declared dead on 9/11 were found alive and well in afghanistan so anything is possible. Just because this can't happen in "your world" keep in mind that there is a lot of stuff happening behind the scenes and not known in the public domain.

Sheer nonsense, unknown, sheer nonsense. IT IS NOT TRUE THAT ANYTHING IS POSSBLE. Those brave astronauts DIED.

Please cite a reliable source for your claim. You're just like Mike Bara, Robert Morningstar amd Kerry Cassidy--you want people to admire you because you know things that are "not known in the public domain." None of you fool me for a second. You're all bullshitters.