The dreams of George Noory

Two nights ago, Coast to Coast AM gave two hours over to the hysterical government hater Alex Jones, thus running the grave risk that George Noory wouldn't get a word in edgeways. However, Jones was gracious enough to allow the radio host to say a few words on the topic of the Illuminati -- that quite possibly ficticious secret society that is alleged to control everything worth controlling in this world. This spoof by "Gawker" gives a briefing if you need one.

25:09 Jones: "What is George Noory's definition of the Illuminati?"

Noory: "I want to go back to the movie Eyes Wide Shut, by the late Stanley Kubrick. And... for people who have never seen that movie, you have to rent it, and you have to look at it two or three times before it makes sense to you. But if you understand the Illuminati it makes sense to you even quicker. Now, there were people in the movie who had bizarre habits, and they dressed up in costumes, and they went to billionaire parties at mansions. And during the day they were successful business-people. They made a lot of money. They were multi-millionaires, billionaires in many cases. And they conducted business, they controlled things, they ran major corporations, but at night they became different creatures. Controlling, manipulative, power brokers, over-sexed, hiding under the shroud of costumes and masks. That's what I think the Illuminati is. It includes some of the most powerful people we know on the planet during the daytime, but at night they become crazy."


Now, it happens that I know Eyes Wide Shut pretty well. I know all of Kubrick's work pretty well, he's a genius in my book. To me George's interpretation is pure fantasy. Here's the scene that George describes as a "billionaire party." I've nothing at all against naked women, but it isn't my favorite scene in that enigmatic film. It's shot in palatial surroundings, to be sure (actually the Long Island mansion "Somerton") so whoever the host is, he's not short of a dollar or three, and note that there was apparently no door fee. 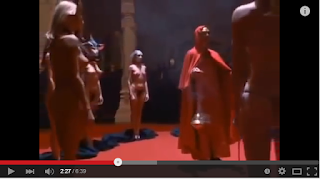 The ritual is clearly religious -- the costume and the censer attest to that. We see impassive onlookers -- in fact, at 04:20 in the Youtube clip there's someone who's a dead ringer for Richard Hoagland -- but we know nothing at all about them or what they get up to during the day. 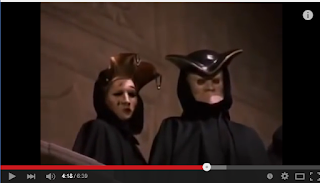 In Arthur Schnitzler's 1926 novella Traumnovelle (Dream Story), from which the script was partly adapted, the orgiastic gathering takes place during Carnival, during which masking, costuming and random fucking are the norm in many, dare I say most, countries that value the traditions. You don't have to be a tycoon of industry to participate. I was once in Cayenne during Carnival, and believe me I know whereof I write.

So I say George Noory's account of the scene comes from his imagination, and Alex Jones' enthusiastic endorsement of it likewise from his. Do they really think this is what George Soros and Ben Bernanke get up to in the evenings?
at 3:03 PM

Holy crap, if Noory is hanging out with Alex Jones, he must be even more desperate than Hoagland.

Expat, a slight disagreement perhaps. I do think the film clearly implies the overall status and importance of the attendants of the ceremony. From the script:

"It's not a matter of money. These people aren't interested in money. It's a completely closed affair."

"Put it this way - if I knew their names it would be worth more than my life to say them out loud".


I do agree with Noory that as far as the common view on the Illuminati goes, Kubrick's movie comes quite close: a clique of very influential or powerful people who engage in the ritualistic or Dionysian outside their normal jobs.

While you're right to say that the movie not explicitly describes the social position of the members of that secretive society, it's not that of a stretch either considering the visuals.

Sometimes I wish this world would have secret rulers lurking in the shadows. It's more scary to think there would be no one at all in control and everything looking at times going to pieces with nobody able to even grab the wheel!

Good research Dee (as usual), thanks. I think the likes of Noory and Jones are just projecting their own perversions onto people they think of as influential. It's like "If I had all that money and influence this is what I'd do for fun."

Added an image from Eyes Wide...

does not have to be midnight by "rule"....I'm sure you are familiar with the so called Lolita express :-) and similar providers :-)
So yes ... in a lot of cases these people have the money, the opportunity and the appetite for parties like these and I think
they do not give a flying fuck what we think of it because they get away with it.

If they were indeed supposed to represent the people he suggests, sounds to me like they're exactly the same!

Very good point. I noticed that too, although I didn't specifically comment on it.