Ken Johnston short-listed for the suicide mission to Mars

View Ken's video-application. Ralph is his real given name.

Naturally, this was a good enough story to devote an hour of Coast-to-Coast AM time to, last night. George Noory wondered what Ken's wife thought about it. "She signed me up for it," quipped Ken. Then came the obvious question -- aren't you a bit old for this? (Ken is now 71).

"Oh no," said Ken. "I'll still be in my seventies, and John Glenn went into orbit at 77." Unfortunately, he was working with the wrong launch year. Actually, even if he's chosen as one of the first crew he'd be 81. More likely, he'd be well into the eighties.

Hoagland confuses the issue
Enter Richard Hoagland, Ken Johnston's biggest booster, to make encouraging noises and trot out falsehoods, as usual. The first thing he got crashingly wrong was to say "No way will this be a one-way mission." He explained that, once the occupation of Mars begins, "the political log-jam will be broken" and many nations will immediately start work on round-trip man-rated rocketry to bring those guys back. Oh, and also -- since Hoagland will be Hoagland -- bring back the technology of the ancient Martian civilization. You know -- the one that left a Nike sneaker and a model plane lying around in Gale crater.

This is to massively underestimate the difficulty of a round-trip Mars mission. The key problem is getting a four-person crew (and the payload of abandoned sneakers) out of Martian gravity and on the way home. To get the Apollo crews off the Moon, one pissy little hypergolic rocket engine was all it took. But launching from Mars, with a full third of Earth-style gravity trying to hold you back, would require a powerful multi-stage rocket and all the associated launch facilities -- a mini Cape Canaveral.

Wernher Von Braun did the math back in 1956, and figured it could be done with 400 launches, assembling two super-giant rockets in orbit. General Dynamics did a study in 1962, assuming eight Saturn V (or equivalent) launches. Robert Zubrin's Mars Direct project hypothetically reduces the requirements to two Ares launches, based on a massively enhanced Space Shuttle stack and a very long turnaround time while fuel is manufactured from Mars water. Even if the Mars Direct plan is really workable -- by no means a sure thing -- does Richard Hoagland seriously believe that it could be put into effect in time to rescue Ken Johnston? Would the math still work if the mass of four additional bodies (plus all the sneakers) was added for the return launch?

Gravity Gradient
The second thing Hoagland got wrong was the assumed need for artificial gravity during the transit, lasting at least 200 days. Ken said the Mars-1 people were working on a tether system. Conceptually, this would assume two tethered spacecraft rotating about their common center of gravity at an angular rate calculated to create a decent fraction of 1g radially. Hoagland dismissed that as a problem, stating "They already did that on Gemini in the 1960s."

Well, they did and they didn't. The Gemini 11 "passive stabilization" experiment was, indeed, a trial of that exact idea -- but it didn't really work. The tether didn't stay taut and the most that was achieved was a measly 0.00015 g. 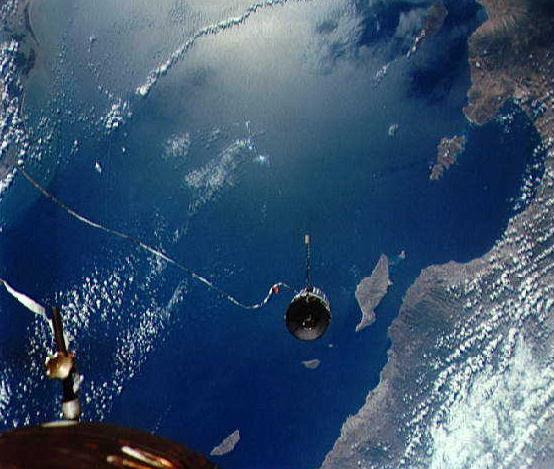 
This blog officially wishes Ken Johnston bon voyage. But it also wishes Richard Hoagland would STFU. He just can't get anything right.

So Hoagie was pretending to be a space expert again. One wonders why he didn't just say that all this rocket ranger stuff was nonsense since we actually have (secret) anti-gravity technology. I guess he's getting so old now that he forgets his own BS now and then.

As to the actual trip, I'm more than a tad skeptical it will ever happen. Von Braun's plan assumed a significant space based technological infrastructure to avoid the problems of working at the bottom of the Earth's gravity well. If you are going to try to take everything with you in one or two flights, you are either going to need really big (and unlikely to be developed) rockets, or you are going to have to leave some important stuff (like a way to get back) behind. This sounds like a paper mission and nothing more.

I was going to come on here and say that Ken's tape looks like a reality show application.

Then I realized I didn't know much about the actual Mars One mission.

I then I realized it is planned to have a reality show component: http://www.nltimes.nl/2014/01/06/mars-one-reality-show-coming/

I feel like the Universe is trolling me. Excuse me, I have to lie down.

And what's wrong with one way trips anyway? A life long commitment...

What comes to mind thought is Douglas Adams' story about the 'B' Ark which was sent ahead to prepare the way.

Those who know the reference would also understand who would be perfect for the passenger list.

I had a very brief exchange with Ken on FB yesterday. He made the point that readjusting to Earth gravity after a long time on Mars is not something he'd care to undertake. Good point.