Richard Hoagland the pseudo-scientist devoted much of the first hour of his marathon radio appearance with Art bell to this image, taken on the Moon in 1967 by the unmanned lander Surveyor 6.

He announced that the glow in the lunar sky was clear evidence of a glass dome, and the linearity was further evidence that it was artificial. He talked about a "stairway."

I wrote  pointing out that the original orientation of the image was thus:

The linearity is parallel to the original vertical. The image was produced by vertical scan of a vidicon and transmitted at low bandwidth. It stands to reason that we are seeing scan lines.

Hoagland wrote back: "Then  I guess these guys presengted[sic] it "wrong" too ....                :)" And he provided a link to a paper in J. Aerospace Engg. by Colwell et al. He means Fig. 1, showing the lunar horizon horizontal, but also clearly showing parts of the original margins. 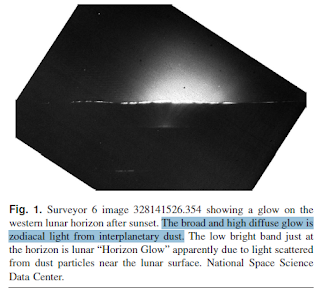 The truly hilarious part is that he evidently didn't notice the caption -- the highlighted sentence in particular.

Was it too childish of me to write back that he was pwned, adding "ALL YOUR GLASS DOME ARE BELONG TO US"?

It might also be interesting to contemplate the vidicon (basically a TV camera) transmitted 200 or 600 lines per frame back and was then displayed on a slow scan monitor coated with a long persistence phosphor before the image we're looking at now was filmed from that medium unto on 70 mm. We don't even need flat bed scanners defects to understand we're not justified in using this material for determining any linear background patterns.

Still photography from later surface missions should show more of it and not less. But I forget the added claim that corrections were done on those stills to hide these domes: meaning we need mechanisms in place to wipe the images AND the minds of astronauts, both involving extreme conjecture. At such point the theory shatter much like the supposed dome.

Hoagie never was one for that whole reading comprehension thing. I'm sure though, that sending expat the link made him giddy for a few moments. Ah well, reality can be such a buzz kill.

Hoagland's images are intended to be found phony, in order to discredit the photographs of the Domes on the Moon from the first Ranger mission.

How do you know that, Misti?

Here's the Ranger photo library. Could you point out the domes, please?

By the way, Misti, that wouldn't be the first Ranger mission. Ranger 1 never left the Earth.

What is happening on the moon?Aime' Michel has written to me that some of the unpublished photographs from the Ranger missions showed well-defined formations which looked like large artificial domes. His information was based on the fat that Dolfus, the current president of the Planetary Commission of the International Astronomical Union, has been urgently called into conference by Kuiper, the astronomer in charge of lunar photo analysis for NASA. The purpose of the meeting was to discuss, as he put it, "whether or not it is appropriate to release the photographs." The press has been kept in the dark. and so have the Soviet members of the commission. What does it all mean?

Now comes a letter from Gu'erin. He writes that Boyer, a Pic-du-Midi astronomer, was at Meudon observatory when Dolfus received Kuper's letter. He was literally "decomposed" when he read it. Before Gue'rin could learn anything more Boyer had gone back to his eagle's nest in the Pyrenees and Dolfus was on his way to the United States. In Boston we find Dolfus suddenly being very friendly towards Hynek, who wonders about this abrupt change of attitude. From Boston Dolfus flies to Tucson, Arizona, for reasons unknown.

Armed with this latest information from Gue'rin, Hynek acted quickly. He called Dick Lewis, a reporter friend of his at the Sun-Times: "Find out why the press is being kept away from the most recent Ranger findings," he told him. "The photographs may be censored." Leewis got existed, picked up his telephone and called Shoemaker, head of the Ranger project. "I don't have time to speak with you," Shoemaker said, "because I'm flying to Arizona to meet with Professor Kuiper."

This confirmed everything we suspected, so Dick presse on with his questions. Shoemaker eventually confessed that about twenty photos showed "peculiar formations" similar to those Bill Powers had noticed. They could be just large round rocks, They could also be artificial domes, or even landed spacecraft. In a later conversation with dick Lewis, Professor Urey stated that he did not have a natural explanation for them.

That was 1964, this is now. The full photo-set is available. Please indicate the domes.

The Ranger 7 images were indeed stirring up great excitement at the time. They were the first close-ups ,a 100 even 1000x times better than ever done before!

The biggest question back then was really: could a spaceship land and people walk on the surface. In other words not sink away in dust. The space race was pretty intense.

The image specialists saw so many new spectacular and indeed "peculiar" formations while the press was all over them begging for release and various interpretations, that Vallee's story doesn't sound that odd.

Apart from the lack of direct quote about any "artificial domes and "landed spacecraft" in Vallee's book, one could also imagine the idea was not that outrageous in the middle of a space race. The idea that the Soviets might have something landed already was pretty much alive and chilling. Also the reference might have been to lava domes (shield volcano), part of another huge debate in the 60's, which might explain better the reported excitement of seeing some.

Apollo 15 images are NOT the still unpublished Ranger 7 images of Domes on the Moon.

I suspect that there are NO images of Domes on the Moon, from Ranger 7 or any other mission, but that the story about them was leaked by NASA which has yet to reveal any supposed images.

Expat: He talked about a "stairway."

This part has not been explained yet as the step feature left above the horizon doesn't follow the suggested scanline orientation.

It does seem to run parallel to the glowing horizon and as the picture was displayed originally on a phosphor coated monitor with extreme slow decay times, I wonder if these are just echoes of the glowing line itself, assuming the camera was not fixed at that time but we'd need to see the sequence of images in the catalog to get some idea about that.

According to this source the frames were scanned each 3.6 sec and then displayed in real time on a monitor having a long persistency phosphor. What we're looking at now is the 70mm capture on film of that and not the restored original magnetic signal, which would definately remove monitor phospor glows if any.

Here are the datasets but I guess a project like this one would be needed to get new Surveyor images. Or perhaps this is already what we're looking at?.

Thanks much for the links, Dee. Highly useful. I feel confident that this is what generated Hoagland's image #2.

Misti: Who's talking about Apollo 15 images? We're still waiting for you to show us domes on the Ranger photo-set.

The Ranger 7 images were indeed stirring up great excitement at the time. ]

Jaque Vallee stated as posted above, that the first Ranger images of Domes on the Moon were UN-fucking-PUBLISHED!

He quoted a respected Space beat journalist who quoted NASA scientists that claimed to have seen the supposed images of the Domes on the Moon.

I've never seen those images and they are not posted on that webpage you link to.

It's the same sort of tactic that NASA resorts to as the arsenic eating bug you debunked. NASA gets everybody else to come up with outrageous claims. Sometimes NASA pretends to buy into them, as in the case of the phony bacteria, and sometimes they deny controversial evidence, like the Cydonia site on Mars.

It makes little difference whether NASA should either deny or confirm any such farcical facts, because the aim is simply to alter public perception of reality, so as to garner support for NASA, without NASA taking the blame for making up bullshit.

Moreover, this leaves it impossible for anyone to ascertain the truth, either one way or another. That way, nobody really is in any position to know anything for certain, except for NASA and America's enemies who have top notch intelligence agents.

It would seem that the public is being manipulated into believing that there is life in Outer Space, while UFOs are never properly investigated scientifically, as far as anyone can tell.

Well then Misti, I advise you to comb the LROC image library (at 300x the resolution of the Ranger images) until you find your domes. Let us know how you get on.

Misti: "the first Ranger images of Domes on the Moon were UN-fucking-PUBLISHED!"

Can you identify which ones are still missing in the collection or might have been altered?

Ranger Photographs of the Moon

Check also out those PDF's. In the first one: "The high quality of the data
obtained from the Ranger VII mission made it feasible to publish this atlas at this early date. It was decided to do so in order to place the photographs in the hands of the scientific community as soon as possible, and for
use in the preparation of subsequent lunar missions".

Or find the missing material in A History of Project Ranger. Read the whole thing can get some senses what the stakes were.

Hearing something through the grape vine is different from actually establishing that something has gone missing. One has to choose between the memories written down in the diary of an engineer outside the program or dismiss the publications of the actual mission team and all related specialists going over the images one by one as being false or incomplete without any piece of tangible evidence!

As I wrote before, the excitement over these images was very big. Scientists really were puzzled about many of the features and Vallee was part of some of that buzz. But he doesn't make clear who exactly said what about definite artificial domes at the time. He didn't even see any picture himself! But we know lunar domes were discovered as my earlier link tried to hint at. I see possibility for a confused Jacques!

I've disallowed a couple of comments from Misti. I'm just bored with the topic of Ranger photos, sorry.

Who pays you to write the loon drool you pist, Misti?

Hoagland says that NASA created Tetrahedron in image of ISON so this means that ISON is of some significance to NASA which means that we need to keep an eye out for interesting developments.

Hoagland is, as usual, mistaken. The pattern made by the multiple image is not tetrahedral.

Misti, who pays you to post the dingbattery you throw around so liberally?