Review of Ken Johnston on Coast to Coast AM, Christmas night

Ken Johnston (see this blog passim) turned up like an unwanted Christmas present on the night of December 25th, to trot out his well-rehearsed schtick accusing NASA of covering up the artifacts of a lunar civilization, and of summarily dismissing him from the all-volunteer Solar System Ambassador program. This time he added a counter-attack on James Oberg (joint founder of this blog) and a confirmation that yes, he did indeed get a bona fide Ph.D. from the Reform Baptist Theological Seminary. James Oberg has identified this place as a diploma mill, pointing out that the link to Ken's certificate online, http://bp1.blogger.com/_eaaXUONwoEA/R0RdX-3kHiI/AAAAAAAAAFs/IkbgSXOsH7g/s1600-h/Ken%27s_Doctor_of_Metaphysics_Deploma.jpg, rather ostentatiously mis-spells the word "diploma."

Last night, the audio quality of Ken's contributions was so atrocious that I can only assume Tommy Danheiser and Lisa Lyon were comatose beside empty bottles of egg nog and the remains of several turkeys. No sane and conscious radio producer would have allowed that rubbish to continue for more than 10 seconds. However, it was possible to grasp the gist of his accusation, with the help of two images posted on the C2C web site. The first was from the Russian lander Lunik 13.

Evidence of a lunar civilization, or part of the spacecraft? Step forward, please, Friar William of Occam, and bring your razor with you. Ken Johnston, as former Data Control Officer in the Lunar Receiving Lab in Houston, has no special expertise that would allow him to get away with claiming this is alien technology.


Now you see it, now you don't

The second "incriminating" image was one this blog has commented on before. It's frame AS14-66-9301 from Apollo 14 lunar surface photography, shot by Commander Al Shepard, showing Lunar Module Pilot Ed Mitchell standing on the surface. Up in the sky, a blue flare is plainly seen and Ken Johnston either thinks it's a UFO (a "Blue Ship") or it's something suspended above the lunar surface (he appeared to hedge his bets by espousing both theories.)

Well now. The Apollo 14 image library makes it plain, to those willing to accept the documented facts, that this was one frame from the third of three 360° panoramas shot by Al Shepard.

Moreover, I can prove that the "Blue Ship" in 9301 isn't real. Because of overlap, the same portion of the sky appears in the previous frame, 9300. Here's 9301 with the blue flare marked (click to embiggen): 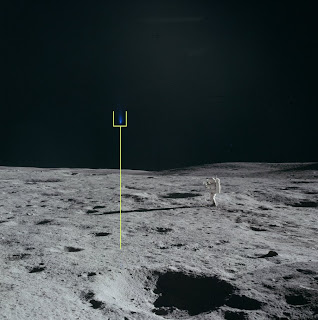 Here's 9300 with the marker in the identical position relative to the ground. 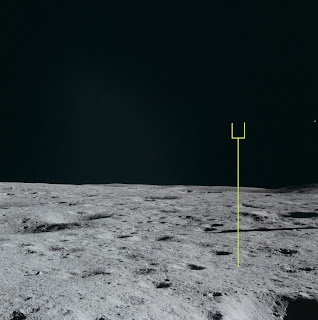 Presto-change-o! Blue flare gone in the second it took Shepard to swivel and click. You can perform the same trick with 9302, actually, but once is enough. So here are the questions that George Knapp ought to have asked (but didn't):


1) Ken, how can you possibly accuse NASA of "covering this evidence up," when the so-called evidence is right there on the NASA History web site?

2) If, as you say, this object is "suspended" then it represents a major hazard in the immediate vicinity of the landing site. Are you telling us that the astronauts knew nothing of it?

3) Why is the object not in frames 9300 and 9302? Why are similar flares in three other frames, showing different parts of the sky?

4) If your credentials as stated to Solar System Ambassadors were correct, why were details of your military service edited when Dark Mission was republished as a second edition? The first edition identified you as a jet fighter pilot with the US Marines, but the second edition merely stated that you "trained in" US Navy planes. (ref. James Oberg's comment to this post.)

Update:
I found another flare. This one's in the very first panorama frame, AS14-66-9236, and it's superimposed on the lunar surface, right by the shadow of the high-gain antenna. Explain that away, Ken!!!
at 11:11 AM

According to Hoagland, Johnston's "revelations" are what started him on the path of solar system artifact hunting. In which case, it's a wonder he didn't call in last night. Perhaps he knows that Johnston and his claims are so old hat that they aren't something he needs to promote.

On a side note, I didn't know Oberg had a connection to this site. I definitely wouldn't want to be a pseudo-science hack with you two around. No wonder Hoagland doesn't post "papers" any more.

I hate how Hoagie says he (or "WE" - whomever the "team" is?!?) will be "publishing a paper" as if that very phrase oozes authority and is going to be in some institutionally-recognized national journal that every scholar and academic will be pouring over up and down the land... when really it's just his thoughts uploaded to a 1998-looking website that probably gets about 20 (well, 19.5 rounded up) visitors a month.

But the REAL reason Dick wont be writing any papers about Elenin or ancient lunar ruins anytime soon, is because he is waaaaaay too busy preparing the next paper on Mrs Barry also being a re-incarnated Egyptian goddess AND!! that the 'Curiosity Mission' is going to discover the ancient Martian libraries which we've all been waiting for (and I'm sure good king barry will tell the general public all about it so we can live happily ever after)...

Chris: Yes, James and I cooked this up together, being equal victims of Mike Bara's "aggressive" editing as moderator of the Dark Mission blog.

Anon: Yes, I hate that royal "we" too. There was a time when Hoagland had associates -- not just Mikey Bara but Ron Nicks, Keith Laney, David Myers, David Percy and even perhaps Gary Leggiere -- but AFAIK nobody works with him on a day-to-day basis any more.

Mike wrote a great deal of the drivel on enterprisemishmash, sometimes attributed, sometimes not. I bet he never got paid for his efforts -- it was probably a case of "stick with me, kid, and we'll both be rich one day." Quite likely Mike viewed it as his apprenticeship in writing this particular style. Actually, judged purely on style, Mike is better at it than his erstwhile mentor.

tell you the truth, instead of giving stable evidence of why his beliefs are false, alls you do is talk trash about his credentials, and also on his personal opinion of some photos. i find it personally intresting that you add none of your own personal thoughts besides how much you hate ken, for appearntly talking agianst your co-bloger. what i really wanna know is, off just going to your site, why trying to find kens pictures, why should i believe you, wheres your credentials that proves your opinion is better then his, im listening to it right at this moment, and goerge napp is very careful to mention, in your opinion whats in this picture, he from my knowledge never said in your expertise what is this. so to end this rant, sorry, but you just seem a scorned blogger. get something other then opinion and a some maybe fake credentials, maybe some info that proves you right, and then ill rethink my position, you may be right, who knows, but he had a hole show of info and you "disproved" 3 things of him. not enough in my opinion.

Anonymous: Thanks for reading the blog. I can respond as follows:

>>instead of giving stable evidence of why his beliefs are false, alls you do is talk trash about his credentials<<

Not true. The majority of my post concerned interpretation of the two photos that were posted on the C2C-AM web site. I sought to refute his theories logically, not with trash talk.

Well, I didn't start this blog for the purpose of airing my personal thoughts. The point is to assess the published opinions of Hoagland, Bara and Johnston. I don't hate Ken Johnston at all. I have no basis for hate, having never met him.

>>why should i believe you, wheres your credentials that proves your opinion is better then his<<

You don't have to believe me. I have provided generous links to the Apollo photo library, so you can examine the images for yourself. I have revealed my credentials in the past but I'm reluctant to keep on doing so because I don't think they're really relevant. Take it from me that my credentials are more than sufficient for me to examine on-line Apollo photography and determine that a blue flare cannot possibly be a spaceship.

I refer you again to the links to the Apollo photo library.

Thanks again for reading.

Johnston's credentials are only an issue in the sense that they are part of his mythology. The reason Bara and Hoagland (and other Johnston supporters) mention them at all is because they believe it adds to Johnston's credibility. If those credentials prove to be exaggerated, that would call into question Johnston's story.

According to Johnston, he was a high level NASA type in charge of an Apollo image archive of "original" images. He further states that he was ordered to destroy those images in (as he sees it) an attempt by NASA to cover up artifacts found on the Moon.

The truth (according to James Oberg and others) is that Johnston was little more than a shipping clerk who's job involved (among other things) making sure the lunar rock samples being sent out included images of where the sample came from. To that end, he was provided a rather large collection of copies of Apollo images. This truth turns the whole "NASA cover up" part of Johnston's story into little more than fantasy.

Yes, it's self-evidently ridiculous to claim a NASA cover-up on the basis of images that are openly available on the NASA History web site.

Here's something else that impacts KJ's credibility. He stated that his photo collection was "first generation" prints direct from the original negs, and that's what makes them special. However, anyone can order first-generation prints from the JSC archive, even today.