The History Channel continues to beat the truth until it cries UNCLE, with Aliens and the Secret Code, Season 3 Ep 13 of Ancient Aliens. This episode (available on Youtube) involved drawing a lot of lines on a lot of maps and globes in an attempt to show that prehistoric man knew stuff he didn't oughta have. Archaeology is a field of study I've had the merest whisper of contact with, but some of the line-making seemed a little expedient to me, and I decided to research one of their straight lines.

Scattered across what is now Denmark and South Sweden, archaeologists have found a series of Wikingerburgen, or Viking ring fortresses. The Ancient Aliens script-writers, Kaylan Eggert and Rich Monahan, wrote this about  them:

1] They have identical construction, being a fortified ring enclosing a number of long-houses arranged in a characteristic pattern.

3] The four main sites Trelleborg, Eskeholm, Fyrkat (which they mis-spell as Frykat) and Aggersborg are in a dead straight line stretching for 218 km across Sjælland, Jutland, and the Kattegat. Here's the line they drew:

Here's the result of my research with Wikimapia:Trelleborg is the most classic design, showing the main features very well, however the internal walls are not compass-aligned.

Fyrkat is better-aligned and does conform to the general plan:

Aggersborg, the most Northern site, has the look of being unfinished:

So what of the alignment between these widely-separated sites? This is how Google Earth sees it -- pretty damn good.

However, they cheated. They simply OMITTED the Wikingerburgen that didn't fit their story -- namely, Nonnebakken, the other Trelleborg, and Borgeby. Here's the real map of these sites: 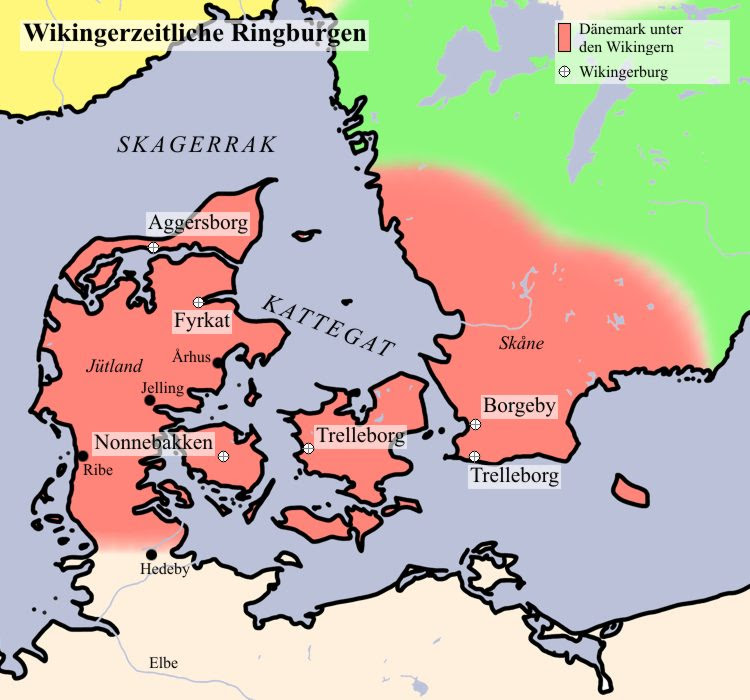 Not content with faking the data to that extent, they actually added a site which is not generally included as a Wikingerburg, and doesn't conform to the pattern -- Eskeholm, in a fjord on the island of Samsø. Here it is:


Bring on the experts
So why, I'm sure you're already asking, is this blog taking an interest in Vikings? Just that one of the "world-class experts" commenting on this piece of flim-flam is none other than Mike Bara, who helpfully speculates "Perhaps they were able to fly" (at 24:35 in the Youtube video.) Yeah, Mike, or perhaps they had a 218 km long piece of string.

Has Mike Bara ever studied Scandinavian archaeology? No. Has Mike Bara been to Trelleborg, Eskeholm, Fyrkat and Aggersborg to study these places on the ground? I very much doubt it, just as I doubted that he's ever been to Aramu Muru in Peru, which he commented on in a previous ep of this anti-science, anti-truth series.

My question to the History Channel would be "What is this unemployed draftsman doing, commenting on subjects he knows nothing about?" They'd probably reply "Well, we were looking for someone who has no respect for the truth. We read Dark Mission and The Choice, and Mike seemed like just the man."
at 9:55 AM

I'm not sure what happened to the History Channel. They used to only deal with fringe stuff in their "History's Mysteries" show. Now it's all Ancient Aliens, UFO Hunters, and Monsterquest. George Noory is on that network almost as often as Ed Herman was.

It can hardly be surprising that the writers of a pseudo-science show have fudged the facts to fit the narative. As we've seen with Hoagland, Bara, and the rest, that's standard operating procedure. Truth never gets in the way of a good (and profitable) story.

As to why Bara, that should be obvious. They needed a talking head willing to go along with any stupid idea they threw out. I doubt Mike has spent more than a few nanoseconds actually doing research on the subject, as speaking from ignorance is his specialty.

Harsh, but true I'm sure.

It's not at all clear how the ability to fly would help in the surveying task of aligning those sites anyway. What's needed is a crude theodolite and a knowledge of sun angles.

Don't you think it relevant that the three you said they left out also appear to form, at least very close to, their own straight line? And, sure, flight might be speculative, but it's a darned big coincidence if you want to say that's all it is. Don't you think? I can't tell what level of dismissal you're implying, but if it's to the level of "this is clearly nothing," I'd say you need to bring a bit more sense of wonder back into your life.

No, I don't think the linearity (very approximate) of the omitted sites is relevant. My point about flight is that an ability to fly is not what is needed in order to align the wikingerbergen. See comment #2.

Unfortunately, you've all missed the mark. The Vikings were known to be tall men, very tall. As a Spanish Muslim chronicle stated, "...tall as palm trees."

To align these sites, a very tall man merely had to stand on top of a tall hill, and use his eyes.

The fact that today Denmark is a very flat country can be explained through a gradual wearing down due to the large number of Vikings checking on the alignment.

Facts!!! be sure your able to back what "YOU" consider facts. Mr Lopes and Expat your so scared that everything you, your parents, your grandparents told are LIES. Don't blame you TRUTH is a bone chiller

- It is a FACT that the Wikingerburgen are not all of identical construction. The images prove that. The History Channel's writers were IN ERROR.

- It is a FACT that the Wikingerburgen are not all compass-aligned. The images prove that. The History Channel's writers were IN ERROR.

- It is a FACT that Fyrkat was mis-spelled as Frykat. I have shown the evidence for that. It was AN ERROR.

- It is a FACT that the show omitted Nonnebakken, the other Trelleborg, and Borgeby. That was AN OMISSION.

- It is a FACT that Mike Bara has no training in archaeology. His e-mail address is mikebara33@gmail.com. Please e-mail him for confirmation of that. You might also conform that he has never traveled to Scandinavia.

I can assure you that these facts do not scare me in the slightest. My concern is that the cable-tv-viewing public is being misinformed. And not just in this episode, either.

The pictures have stopped working. It would be cool to see them, so if you could update them, it would be amazing!

Oh, that's a shame. The Youtube version of the show no longer exists, so I don't have access to the images. I'm sure you could find images of the main sites with a google image search.