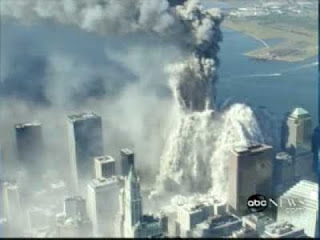 Dr Judy Wood delivered her performance on Coast to Coast AM last night, eagerly awaited by the Branch Hoaglandians because it was her work that Richard Hoagland ripped off for his recent conference presentation.

Dr Wood spent some time educating the audience about the importance of real forensic evidence as opposed to speculation, then almost immediately broke her own rules by making an ENORMOUS leap of conjecture. The twin towers were dustified, she announced, by a directed energy weapon. When George Noory asked her where she thought the actual weapon itself was situated, she dismissed that as unimportant.

I really have neither the time or the skill to analyze Wood's data—in any case, others have already done that quite well. I thought, however, I might provide an additional data point by estimating the total mass of drywall in the North Tower. As anyone with any construction experience can tell you, sheetrock dustifies very nicely, often when you wish it wouldn't. It's just loose chalk between sheets of paper, really. Was the dust cloud that drifted over Lower Manhattan mostly gypsum? Let's see....


Now, I make no pretense that this is in any way an accurate measure. It's just a little better than pulling a random figure out of my ass. It's "in the ballpark," as the sports fans say. I'm just saying that around 1000 tons of drywall would have dustified immediately as the tower collapsed, and over 500,000 cubic feet of air would have been pumped out of each floor as it pancaked, helping to form the white dust cloud. It's a lot harder to estimate how much of the 2,836 tons of ceiling would also have crumbled, but very likely some of it.

Judy Wood appears to think that the cloud contained most of the structural steel, too. Put me down as a sceptic on that.
at 8:24 AM

The Towers were not collapsed due to fire. What happened to all that STEEL? IT'S NOT PILED UP IN A GREAT HEAP BECAUSE A LARGE MAJORITY OF IT WAS ATOMIZED!
It was a basement Nuclear demolition.
WHY WAS RADIATION PROTOCOL OBEYED - WATER WAS SPRAYED AND DIRT WAS PILED ON THE RUBBLE.
Some first-responder folks wore full Hazmat Suits. Other Darwin-Award first responder "heroes" were too stupid to run away from an obvious Nuking.
Hiroshima was quickly rebuilt, so don't do the "radiation would never stop" nonsense.

George, the towers were not designed to support the weight of a fully-loaded 767 on a upper floor. It's fairly amazing that they did, nevertheless, support one for a few hours until the heat weakened the structural members.

Your nuclear theory is just as nutty as Judy Wood's directed energy weapon. Neither is needed to explain observed phenomena.

That sure was easy to explain!

The heavy Jet crushed and dustified the building in 10 seconds. And a little bit of debris crushed Building 7.

Ground Zero is still ALWAYS referring to Nuclear Detonations of some kind.

Our latest research in 2009 has brought us to a series of remarkable discoveries in the collection of victim stories. What began as an insightful look at the CNN.com 9/11 Victim Memorial, the original source of the death reports, turned into realization after realization that the entire body of victims - from the airplanes, to the Pentagon, to the World Trade Center - had all been created at the same time by an "identity generating" software program which creates 'digital' people with (oft improbable) fictitious names. Anyone armed with a little patience and a discerning attitude should be able to realize that the CNN Victim Memorial is a preposterous list of counterfeit identities. As a result, the full extent of the 9/11 simulation - heroes, victims and villains - is revealed as the absurd, fabricated drama that it is.

To understand how computer-assisted false identities can take the place of both false events and society's "normal" functions (including the role of news anchors or even the role of those allegedly investigating the simulation!) please view the full body of the CNN.com 9/11 Victim Memorial Pay particular attention to the invariably sappy and contrived comments/tributes posted by alleged "families and friends"; note the endlessly recycled patterns of those messages of condolence - almost invariably addressed in first person to the 'dead' as if they could read their own tributes from Heaven; note also the farcically poor quality of hundreds of portraits - as if all these families had no better picture of their loved ones to offer. Then read the Vicsim Report. After this exercise, you should feel equipped to tackle the increasing challenge of distinguishing between computer-generated sims and real people.

Thank you for your interest in defending humanity's senses!

In your spare time, could you just Sue the people who wrote this? k thnx bye

Towers just collapse with ground hugging pyroclastic flows every time a buried Nuclear device is exploded, also calling it Ground Zero just as if everybody knows it would be! I know!

Judy Wood appears to think that the cloud contained most of the structural steel, too. Put me down as a sceptic on that.

Yes, it's interesting to note that you don't describe all that wonderful recycled steel that was sold to no one knows and that's good enough for me I want the whaaaaambulance

I admit I'm a little perplexed at what might actually be motivating Dr. Wood. I mean Hoagland's motivation is easy. He doesn't have the background or credentials to be a real science/technology writer, so pseudo-science is his only option. Dr. Wood though, was a real scientist with a real job. She had other options. So it is either pure ego driving her to this (the I'm right and everyone else is wrong thing), or she is really believes all this and is just plain crazy. Tough choice.