Not as a prisoner, but as a prison visitor, for the TENTH time. Vacaville is the site of the Solano California State prison, and it's been home to a violent murderer and spectacular liar called Mark Richards since 1983. Kerry Cassidy likes hearing Richards' extravagant yarns so much that she's schlepped to Vacaville now ten times—a journey of over 300 miles each way—to hear them and tell the world about them.

This latest interview took place in mid-March. Cassidy's report of it is in video here, and transcribed here. I'm extremely glad for the transcript because I always struggle with the audio of her reports. It's got nothing to do with her voice—when Kevin Moore interviewed her I heard every word. 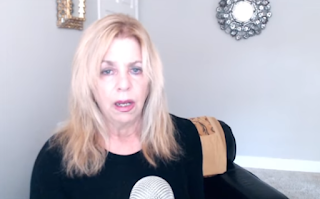 
"I encourage all those reading this and watching my Mark Richards interviews to ... see what resonates. Discernment is all about being able to tell truth from falsity. As with all information, do your own research."

I did quite a bit of research for my critique of Interview #9, and had no problem doing more for this article. I have to report that very little "resonates". Some comments:

Page 1: "He is an honorable officer of the Navy, who because of his rebellion against the Draco and Reptoids (Luciferian alliance) is considered a threat to their operations".

Richards is nothing of the sort. He never enlisted in the US Navy, much less attained the rank of Captain. The Luciferian alliance is a science fiction concept with no basis in reality.

Page 2: "He was framed for a murder he is accused of having masterminded while he was on a mission off-planet in service to humanity. He was Captain of a starship enterprise type vessel, fighting the war against aliens bent on the takeover of Planet Earth.

Richards was not "off-planet," or fighting wars against aliens. He was present at the murder scene although he did not strike the fatal blows. His fingerprints were on the murder weapon, and the victim's credit cards were found in his possession.

Page 5: "I believe that Richard Baldwin was selected as the victim by the team within the military and highest levels of power in Britian and the U.S. reponsible for framing Mark Richards."

Poppycock. The simple truth is that Richards' home remodelling business was failing and he needed money. There is not the slightest evidence of involvement by US military ops. As for British top-level involvement, that goes beyond fantasy into sickness.

Page 10: "Mark states that he had just returned from fighting the war in the Falklands. Which he says was a battle for control of planet Earth. .... It was a battle with alien races; Draco, Reptilians and Greys. The Raptors fought on the side of the humans."

The murder took place on 6th July 1982. Argentine forces surrendered on 14th June, so the dates are plausible. However, the belligerents were exclusively The United Kingdom and Argentina, and the motives were control of the Falkland Islands, South Georgia and South Sandwich, not "planet Earth". Again, Reptilians etc. are figments of science fiction. It's frankly astounding that Kerry Cassidy would report this fantasy as fact, when so much about the Falklands War is a matter of easily-researched public record.

Page 13: "With regard to the trial, ... the DA relied exclusively on the information provided by Andrew Campbell. ... Campbell was highly likely to have been the undercover agent on the scene orchestrating events, while Hoover (the other perp) was the patsy."

This "does not resonate," as Kerry would say. Another way of putting it is that it's a fucking lie. Hoover was at least as important a source of information for the prosecution as Campbell. Both Campbell and Hoover were 18-year-old unskilled kids. See "From Pendragon to a Secret Space Program".

Page 16: "There are 5 key points on the planet, called LaGrange points or L5. ... Mark says those points allow one to jump off planet easily and used to be used for shuttle craft going back and forh to the larger Orion craft parked above the planet."

The five LaGrange points are not on the planet but in space, in the orbital plane of any two large gravitational bodies. L5 is just one of them. They have nothing to do with shuttle flights and there is no such thing as a parked Orion spaceship.

Page 24: "NEW NATIONAL PARK OFF VANDERBURG [sic] AF BASE. This new National Park called "Jack and Laura Dangermond Preserve" has been established to hide a huge ET underwater and undergound base that stretches down to Malibu"

It's fair (or "it resonates") to call the Dangermond Preserve new, since the $165 million donation to the Nature Conservancy was made just in 2017. However, it is not a National Park and it does not conceal an alien base. Its extent is 24,000 acres. 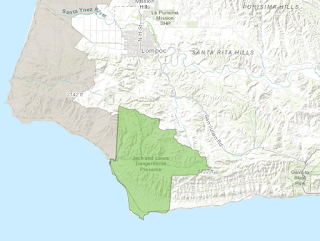 The lunch receipt
On pp. 13-24 of the transcript, we read that a trial witness known as "the chimney sweep" stated that he had a receipt proving that Mark Richards had bought lunch for his crew (Campbell & Hoover) prior to the murder. The account continues "But Mark claims he simply paid for the lunch and then did not eat with the crew but continued on to have lunch with his parents at their home."

The question then is, How can a man who is supposedly off planet fighting alien wars also be having lunch with his parents??? That question obviously troubled Chad Mensan, a YouTube commenter. He wrote:

"Throughout the previous nine interviews, and the several years during which they were conducted, the story was ALWAYS "off-planet"; it was never vague and never varied. Now we're told that there is physical evidence to the contrary, and it's presented without even an acknowledgement of its contradiction.
:::
I think that there's something seriously rotten behind the scenes on this issue. Most importantly I hope that Kerry's okay."

Chad has a very good point. In my opinion, Kerry is not "okay". She's deranged.

Update: This is brilliant!
Another YouChoob commenter, "Ritalie," has now responded to Chan Mensan thuswise:

"What you are describing is not a change of a story, as much as it sounds like a timeline change. Have you ruled out the possibility that we have experienced a major time shift? I've seen it happen when Trump was elected. This is not the same Earth that we were on, prior to the 2016 election. Remember Hilary? Or Dolores Canon? Neither exist anymore."

Of course!!!! A time shift!!!! How silly of us not to have thought of that. Mark Richards' story hasn't changed at all, it's just that the facts changed without his knowledge. Oh yes.

Update 9th April:
Kerry has now released a statement apparently addressed to all those people who think, like me, that she's been bamboozled by a world-class liar. An extract:

"It’s not my job to convince you or anyone else.  We present the evidence and provide the interviews so you can see the witnesses speak for hours at a time under my high scrutiny and questions.  You decide.

If it resonates so be it.  If not, then no amount of truth telling will open your eyes.  If you wish to believe that Jo Ann and I are deluded.  That Mark who has written books and treatises available for a very low cost is not to be believed.  If you wish to remain in your cocoon of unknowingness do so."

Oh dear. "Presenting the evidence" is exactly what Kerry fails to do. Letting us see Mark Richards speak for hours at a time is also what she fails to do, although I'm sure she'd love to take her camcorder into Vacaville if it was allowed. As for "high scrutiny," that's not what I've seen from her interviewing technique. Far from it.

"You decide," she says. Thanks, Kerry, I already did.

I think one of the things most disturbing about the interview is the attack upon Carl Shapiro, Mark's lead attorney. Kerry suggests that Carl was a mob associate and helped to frame Mark.

Shapiro was the dean of Marin County's criminal defense and civil rights bar, respected both for his e celebs lawyering but as a human being committed to his beliefs. He provided Mark with a passionate defense. Mark fails to mention that Carl first represented him in 1973, when he successfully defended Mark during the period of time that Richards now claims to have been an army lieutenant, flying helicopters in Vietnam. At the Pendragon trial, Mark also had the assistance of Dennis Riordan, one of the best attorneys in the state - a dream team.

In any event, my comments are posted on my website - just to keep the record straight (and to ensure that Kevin is not blamed for the things I write about Richards), is mine rather than Moore's. I do know that work on Kevin's documentary is proceeding - he has been very thorough - and will resolve some of the issues included in the Tenth interview.

Thanks much for the comments. I apologize for the misattribution—I've corrected it. Kevin seems to think he needs a multiple re-shoot and he hasn't got the money for it.