Since I blogged Richard Hoagland's failures on 22nd January, he's had more luck with the demons of internet radio. Both shows over the 27th/28th weekend completed just fine. The subjects were Antarctica with Robert Morningstar (who has no known expertise on the subject) and Wilbur Allen; and a Space Drive with Mike Gamble.

Both nights of this last weekend, 3rd/4th February, were billed as featuring Ken Johnston and Steve Troy, discussing what Hoagland has already discussed to death over the years, namely Glass Structures on the Moon, and how NASA suppresses evidence of them. Think about that—that's SIX HOURS on a basically non-existent topic. Are these people mad? (don't answer that.) Ken Johnston almost immediately got off topic by telling his old familiar stories about how he saved a set of 10x8 glossy photoprints from the Apollo program. He even repeated yet again the story of how he saw evidence of an alien base in crater Tsiolkovsky, in 16mm film taken from Apollo 14 as it overflew that huge crater on the back side. He didn't explain how a spacecraft in an orbit inclined 14° can overfly a crater at 20.4°, and Hoagland didn't think to ask.

Steve Troy may have been more compelling (and more original) but since his audio was incomprehensible it's hard for me to say. Hoagland himself, however, was easily audible and he came armed with a set of 13 images, some of which he says confirm the presence of glass structures. Well, I've seen lots of Hoagland's "evidence" since I've been creating this blog, and none of it is remotely convincing. A couple of the images he presented on Saturday night went beyond merely "unconvincing" into the realm of sheer hilarity. Here's one, in which Hoagland mistakes jpg compression artifacts for his precious alien glass houses: 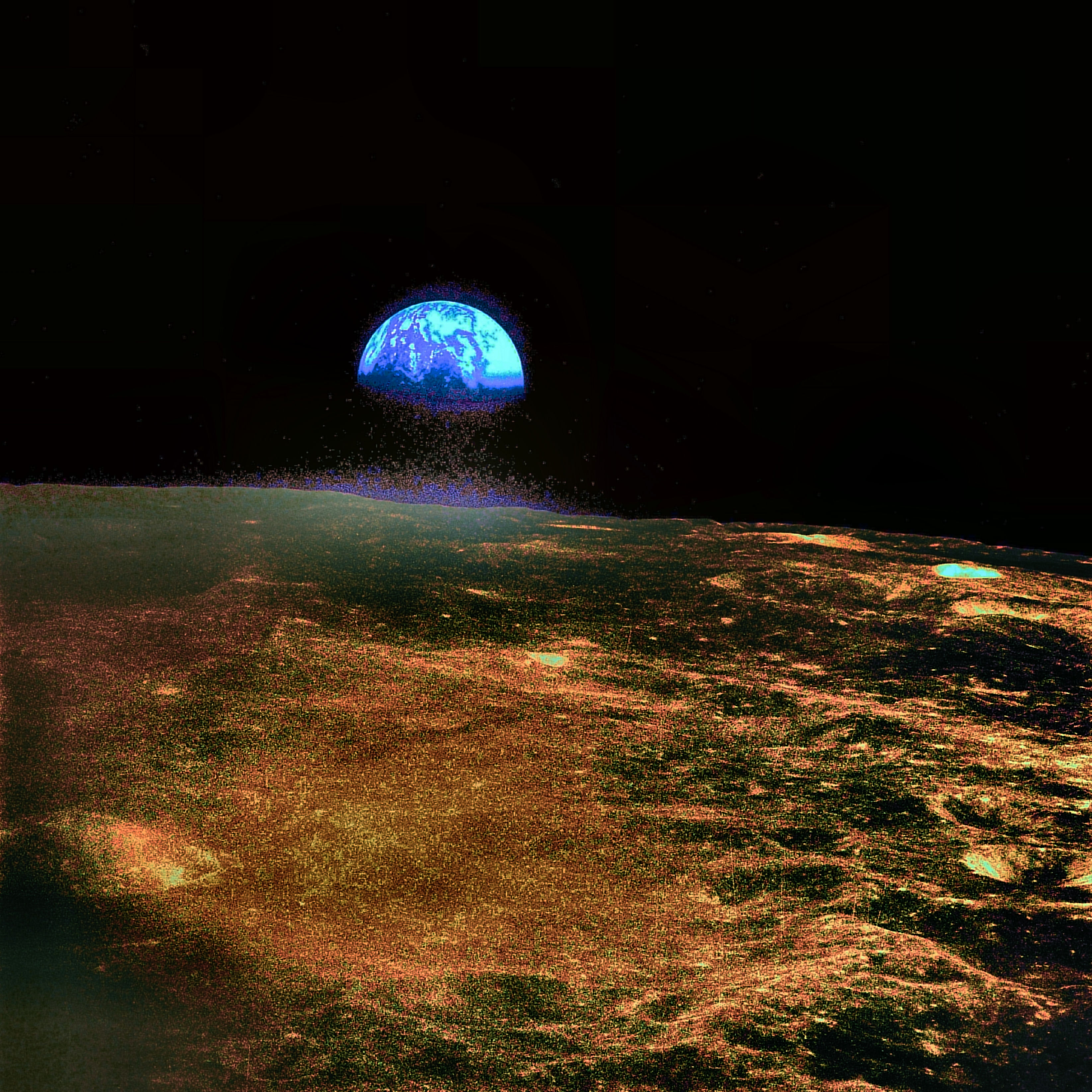 It's from Apollo 16, and to get that horrible effect he says he had to "enhance" it. What he actually did was FUBAR it, as we technical chaps say.

Hoagland-style enhancement was also to blame for the worst case of scanner contamination I've ever seen. This one was an Apollo 11 earthrise shot:

I wasn't sure whether he thinks the horizontal lines introduced by a cheap scanner are the glass structures, or is it the grubby thumb prints on the scanner glass?

These horrible exhibits, and others like them, illustrate a Hoagland paradox. He loudly alleges that NASA suppresses evidence of glass thingies, yet his evidence is derived from... NASA.

Podcasting
In addition to the show's presence (sometimes) on Blog Talk Radio, there is now a podcast stream available to members only. Which is just as well, since on Sunday night the BTR stream crapped out after a few minutes. Hoagland complained that his computer mysteriously switched itself off—cast-iron evidence that some sinister conspiracy is devoted to sabotaging his chat-show. Personally, I'm not too sure about that last part. Once again, FUBAR could just as easily be the problem.

The podcastery only works while the show is actually "on the air," but for the time being the Saturday show can still be heard at this link.

Update 21 February:
Here's Bret Sheppard's hand-drawn Apollo 14 ground track, referenced by James Oberg in a comment today. He has the maximum southerly track passing Tsiolkovsky X, at 15.25°S. In reality Apollo 14 could not have gone further South than 14°. The small crater Dobrovolsky R, right by the A of the label "Apollo 14 ground track" is at exactly 14°S. 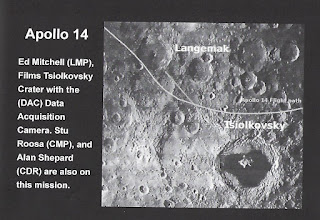 The Apollo 14 photographic index map shows that the nearest photo target was near crater Necho P, at 7°S. It's the one only party seen on Sheppard's map to the North.

My God, the Castle. AGAIN. First presented 24 goddamn years ago, in 1994 during his Ohio State presentation. At this point, he's got to be relying on generational turnover. "Hey, there are people who have graduated from college who had literally not been born when I first went over this crap, so why not act like it's new?"

Of course, 1994 was an era before most people had the Internet, and you could much more easily play scientist with an urbane delivery, the right vocabulary, a laser pointer, and some "enhanced" photographs. Today, RCH is competing with a legion of random Youtubers who prey on the credulous with the same circle-and-zoom techniques.

He used to emphasize that the democratization of technology was allowing We The People to discover what they didn't want us to know. Ironically, it's that same democratization that has now completed his descent into irrelevancy.

Yes, I had a giggle at that too. AND the blue flare from Apollo 14.

I think Hoaxland must be looking at all his photos and videos on some sort of ancient 8" monochrome kinescope. When I look at the actual colour footage of the Earthrise he claims is visible through a glass dome

it looks absolutely fine. He could also have chosen to look at the Hasselblad images taken at exactly the same time, namely AS10-35-5225 to 32, which again show no evidence of the massive glass dome. A dome that would be visible from Earth.

I see he also claims that James Oberg has'conceded' that Apollo 14 flew over Tsiolkovskiy crater. I'd like to see that concession.

"I see he also claims that James Oberg has 'conceded' that Apollo 14 flew over Tsiolkovskiy crater. I'd like to see that concession. "

Bret Sheppard says I 'conceded', but Sheppard also says he invented Saran Wrap [movie reference 'While You Were Sleeping']

Sheppard published a moon map on which he had drawn a squiggly line across Tsiolkovsky with a crayon, and labeled it an Apollo-14 ground track map.

I've shown the map JimO refers to in an update today. It's from Bret Sheppard's book Flyover Tsiolkovsky Crater and I'd cite a page number if I could. The book is unpaginated.