Robert Morningstar's record on earthquake prediction is abysmal. His prediction that a planetary alignment would cause a monsta quake in June 2015 was a fail. On April 3rd 2014 he posted this warning:


"The 8.1 magnitude EQ in Chile yesterday is merely a harbinger of many more to come within the next 3 weeks, with the most severe quakes, volcanic activity and electrical storms to come between Mars' opposition to Earth on April 8th and the Lunar Eclipse of April 14-15 when Mars and Saturn will be in line with the Moon, Earth and Sun."

Not very much happened. Morningstar claimed a hit on the basis of a swarm of quakes magnitude less than 3 up the California coast. But is there ever a time when there isn't a swarm of little ones in that area?

Today he stepped up to the plate once more with this scary prediction:


"A TOTAL ECLIPSE OF THE SUN & MOON CROSSING OVER THE NEW MADRID FAULT ZONE COULD CAUSE EARTHQUAKES DURING & AFTER PASSAGE on August 21st, 2017.

I spoke with Angel Espino & Seth Weiler on Skywatchers Radio at length on Monday 4/11 about the earthquake triggering potentials of forthcoming total eclipse of August 21st, 2017.

I've attached a link below with a map of the Earthquake prone fracture lines across the continental United States so that we can plot the course of the eclipse over the US EQ fault line system. 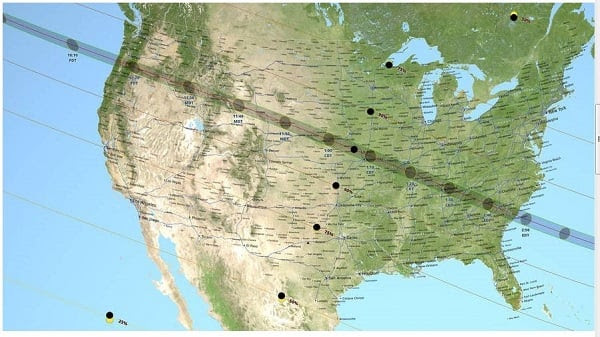 This is in keeping with my theory that the growing strength of the gravitational forces of Sun and Moon at the moment of a total solar eclipse and their subsidence afterward can trigger earthquakes on both in the area of totality and on the other side of the Earth with [sic; presumably he means within] 36 hours of the event.

The article provides a good map of the continental US with the Eclipse track delineated. The link below in the comment section provides the EQ Fault Line map so that you can determine whether or not you are living adjacent to one of the fault zone in the area of totality.

My main concern is that the pinnacle point of totality will occur as the Sun and Moon line up over the New Madrid Fault lines as it passes over Missouri, Tennessee, Kentucky and points East as it they head toward the South Carolina coast, which is a massive coastal fault zone."

Rubbish
It should not surprise us that Morningstar's predictions of geo-activity are not very good. He has no training in either seismology, geology or planetary astronomy. His credentials are in psychology, which perhaps makes him think he has a gift for scaring people.

Specifically, there is no reason to believe that a solar eclipse occasions a danger of large quakes at the sub-solar point. It is true that the gravitational vector from the combined Sun-Moon system at conjunction is very slightly greater than when the Moon is in opposition,note 1 but then, the Moon is in conjunction every month without causing an eclipse, and without noticeably causing seismic activity either. It causes spring tides, so the effect is not zero, but the point is that it happens every month. We do not get scary earthquakes on a monthly basis, no matter what a New York psychologist and frisbee expert might wish upon us. Back in October 2012, Stuart Robbins of Exposing Pseudoastronomy performed a statistical analysis and found no correlation between lunar phase and major earthquakes. He was also looking for a possible connection to lunar perigee, which slightly increases the lunar gravitational vector, and didn't find that either.

Update:
I came across this article from Nature, 12 September 2016, allowing for some correlation between spring tides and earthquakes. It's a rather subtle effect, not working the way Robert Morningstar imagines it at all. Put simply, the increased load on a coastal region cause by a high tide can convert what would have been a small quake into a much larger one. There is still absolutely no reason to think that a lunar eclipse has any more powerful effect than the regular monthly lunar conjunctions.

IF and I say "IF" Morningstar's devastating Earthquake hits on August 21st, 2017, the susceptible, Juan de Fuca Plate is right smack dab in the path. Portland, Seattle, and Vancouver, BC, could be subject to a 9.2 magnitude, temblor.

So better watch out for the cataclysm on June 11th, or possibly November 6th.

The friable, New Madrid Fault, in the Mid-West, is also in the August 21st, trajectory.

I think he said that, Theadora...

Hearsay. It's just you repeating what a troll with a Communist spy's head shot avatar, that calls himself James Concannon, supposedly says.

Have no fear. There will be a fresh new generation of panic mongers come 2024, when another total solar eclipse path runs South-North over the US (max eclipse crossing very near the max eclipse location this August).

Panic volume will probably be double by then; earthquake claims run amok

April 8 to be precise.

However, it does itch the mind a bit to ponder about these types of people who believe in gravitationally/alignment/God induced earthquakes probably also believe the gubmint has the power to induce earthquakes at will (eclipse or not); well, why not also realize that logically the gubmint should also have the ability to suppress them?

Any conspiracy nuts reading this should think about that for a long while; let the possibilities go back and forth and round and round in your heads.

So a gift (sorry rational readers): now you can have it both ways:
Ecliptic earthquake near 21 August? "I told you so!"
No earthquake? "Gubmint conspiracy!"