Almost two weeks ago, Kerry Cassidy released a new two-hour interview with Ken Johnston onto what she calls her "TV network." It's permanently available on the Tube that is You.

She introduced Ken as a whistleblower, largely reading from the Rational Wikipedia article about  him, but missing out the part which details misrepresentation of his military career. James Oberg has written about that in much more detail on this blog.

Technically, the interview was quite hard to follow, being done via webcam with extremely choppy audio, but I reviewed it and got the idea (perhaps because I've heard most of the material before.) Kerry, of course, had a different explanation for the poor audio quality.


59:00 KC: "It's very funny that we have a bad connection, when you've done so many interviews. It's really fascinating... er, that they're really afraid that you're going to say something ... because I'm going to ask you some good questions that most people don't have the guts to ask you."

Yes, sure Kerry, when the bad guys want to censor you they don't just jam the whole thing, but only cut out the audio at times when they can't predict what exactly they're going to be cutting.

Skullduggery at the light table
It surely didn't take any "guts" at all to ask Ken to repeat the story he's told many times, of wandering into a secure NASA backroom to find a team of people altering the original film images shot by the Apollo astronauts on the Moon. This time around he added the detail that this was being done on a light table, the images in question were large negatives, and the technicians were blotting out stars in the lunar sky "because they might confuse people."

There are two major problems with that story. First, there were no stars visible in those photographs. It's impossible to take a shot in such a way that the bright lunar surface is correctly exposed and the much fainter stars are also visible. Second, if they were dealing with negative film,  stars, if they existed, would appear as tiny black dots while the sky surrounding them would be transparent. There is no retouch process that would make those little black dots also transparent.

The tiny kernel of truth hidden here may be that the photographs were being retouched to remove sparkle that might have been misinterpreted as stars. However, if this was done it would have been done on a print, not a negative, and not on a light table.

Later (at 1:12:40) Kerry suggested that the purpose of smudging out stars was that the constellations would have revealed too much about where they really were. You have to admire a mind that is ignorant enough and paranoid enough to come up with that one. They were on the fucking Moon, Kerry.

Looks like we've got something in that crater there
Kerry had some exhibits -- mostly images from Ken's  own Apollo collection that she invited him to comment on. Nothing illustrates the shoddiness of the analysis these two clowns bring to lunar imagery better than this one. 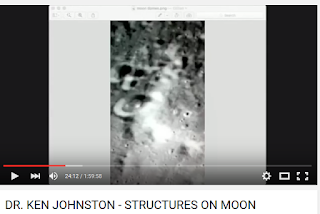 Ken said "See that bright area there? Looks like a bit of smudging out that's been done." Kerry replied, enthusiastically, "We definitely look like we've got something in that crater there." Yeah, Kerry, a central peak. They're all over the Moon. So what we have here is two people to whom overexposure of part of a film frame is evidence of tampering. God give me strength...


Disclosure
At one point Kerry said that Brian O'Leary left the USA because he felt he was under threat because of his disclosures. That annoyed me because I have personal knowledge of this. O'Leary didn't disclose anything. He had nothing to disclose, having never flown in space. He left the USA because he was shagging Meredith Miller, and she wanted to go off to Ecuador to establish a New Agey retreat (which still exists, by the way, even though O'Leary died in 2010.) 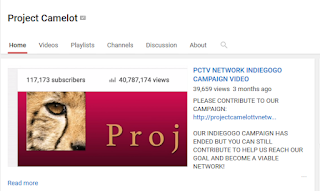 Hmmm, I wonder where the moon base is? These are the two craters to the left of the spacecraft: http://bit.ly/1KYMdyW

Trekker, we're talking Cassidy here right? Loouds of aliens and interdimensonal "jump" portals to the vast galaxy included. Although no doubt she'd think that constellations would differ on each local planet too.

Very well spotted, Trekker. The "Moonbase" is on the other side of the CSM. You can see the Ken Johnston version at 54:35 in the vid. It's incredibly unconvincing.

Well, I tried to pinpoint the 'Moonbase'. As you say, very unconvincing. It's in this area: http://bit.ly/1S39pDS

That first image of yours - the still from the Youtube video of an alleged crater with a glass dome, isn’t actually a crater with a central peak, Expat, but one with a flat floor. It can be seen on AS17-P-1923 and AS17-P-1928.

Here’s the view from the LRO:

Not much glass visible there!

Well, aren't you the ace crater-sleuth. How the hell did you match that terrain, with so little to go on?

What looks like a central peak is actually a crater within a crater.

Weren't the Hasselblad films positives rather than negatives?

The Russians also photographed that particular area with Zond 8:

and it's also in this Hasselblad image from Apollo 17:

>>Weren't the Hasselblad films positives rather than negatives? <<

The color shots were reversals, A.K.A slide film, for those of us old enough to remember slide shows. The B&W magazines were negs.

Lol! Well, I took a screenshot of the area in the Youtube video, did a reverse google image search, found it mentioned on a woooo site, found the file number, and went from there!

It might be possible to ink out sparkle on a 70mm reversal frame, and that would require a light table. But Ken definitely said negatives.